Effect of Aging on Homeostasis in the Soft Tissue of the Periodontium: A Narrative Review
Previous Article in Special Issue

An unaddressed and important issue is the role age plays in modulating response to short acting β2-agonists in individuals with asthma. The objective of this study was to identify whether age modifies genetic associations of single nucleotide polymorphisms (SNPs) with bronchodilator response (BDR) to β2-agonists. Using three cohorts with a total of 892 subjects, we ran a genome wide interaction study (GWIS) for each cohort to examine SNP by age interactions with BDR. A fixed effect meta-analysis was used to combine the results. In order to determine if previously identified BDR SNPs had an age interaction, we also examined 16 polymorphisms in candidate genes from two published genome wide association studies (GWAS) of BDR. There were no significant SNP by age interactions on BDR using the genome wide significance level of 5 × 10−8. Using a suggestive significance level of 5 × 10−6, three interactions, including one for a SNP within PRAG1 (rs4840337), were significant and replicated at the significance level of 0.05. Considering candidate genes from two previous GWAS of BDR, three SNPs (rs10476900 (near ADRB2) [p-value = 0.009], rs10827492 (CREM) [p-value = 0.02], and rs72646209 (NCOA3) [p-value = 0.02]) had a marginally significant interaction with age on BDR (p < 0.05). Our results suggest age may be an important modifier of genetic associations for BDR in asthma. View Full-Text
Keywords: bronchodilator response; genome-wide interaction study; asthma bronchodilator response; genome-wide interaction study; asthma
►▼ Show Figures 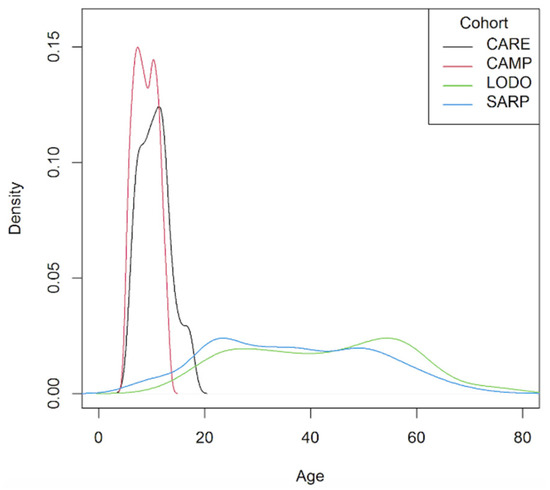