Rheumatoid arthritis (RA) is the most common chronic autoimmune inflammatory arthritis, affecting approximately 0.3–1% of the world’s population [1,2]. The disease primarily affects the articular joints, causing swelling, stiffness, joint destruction [3], loss of function in joints [4], disability and a significantly lower quality of life. To prevent irreversible joint damage resulting in substantial disability, it is important to introduce disease-modifying anti-rheumatic drugs (DMARDs) early after onset and failure of non-steroidal anti-inflammatory treatment.
Conventional synthetic disease-modifying anti-rheumatic drugs (csDMARDs) such as methotrexate (MTX), hydroxychloroquine (HCQ), cyclosporin, sulfasalazine (SSZ) and leflunomide are commonly used mainstays of the disease; however, it is widely known that a significant proportion of patients with RA often show poor or inadequate therapeutic response to csDMARDs [5]. The anti-folate MTX is the cheapest drug in treatment of RA and is often the first-line treatment [6]; however, only 55% of patients remain on this drug for more than 2 years due to a build-up of non-response or the accumulation of various adverse side effects [6,7]. MTX is subject to significant metabolic activity in the body; the polyglutamated derivatives of MTX are selectively retained in cells, therefore lengthening the activity of the drug which complicates treatment management, since patients would continue taking their daily drug dosage oblivious to the fact that their circulating drug levels are still high, potentially contributing to undesirable cytotoxic effects [8,9]. MTX is converted in hepatic parenchymal cells resulting in the 2- through 4-glutamate residues derivatives or the drug is catabolised to the 7-hydroxy-methotrexate (MTX-7-OH) form [10]. More than 10% of a dose of methotrexate is oxidised to MTX-7-OH, irrespective of the route of administration [11]. The MTX-7-OH metabolite is extensively (91 to 93%) bound to plasma proteins, in contrast to the parent drug (only 35 to 50% bound) and contributes to inactivity of the drug or poor response to treatment [11].
When non-response has been confirmed, NICE clinical guidelines recommend switching to the more costly biological disease-modifying anti-rheumatic drugs (bDMARDs) [5,12,13]. Various studies indicate that treat-to-target strategies which aim to reduce disease activity shortly after diagnosis result in better long term outcomes and can minimise permanent joint damage, thus there is a genuine need for earlier identification of patients who do not respond well to csDMARDs treatments [6].
It is estimated that 15–30% of variation in drug responses are attributable to genetic or single-nucleotide polymorphisms or SNPs [14]. Not all SNPs are functional; some are in non-coding areas (introns) and there is a variety of ways that a SNP can affect or inhibit downstream transcription factor, gene or protein function [15]. The promise of pharmacogenomics is that identification of SNPs and associated risk alleles could identify patients who may be susceptible to accumulating cytotoxic levels of a drug during therapy (as in the polyglutamate derivatives of MTX) or when certain metabolite levels accumulate rendering a drug as inactive (as in MTX-7-OH).
In this study, we sought to determine the metabolite levels in RA patients taking DMARDs. We then carried out genotyping of 10 SNPs known to influence the metabolic pathways of DMARDs in arthritis. Our aim was to determine if genetic variations or polymorphisms associate with metabolite levels. This could help design studies to improve clinical management, which risk stratify patients at greater predisposition of forming ineffective or potentially harmful metabolite levels, by adequately planning ahead the appropriate drug and dosage.

The research team at Ulster University collaborated with rheumatologists from the Western Health and Social Care Trust (WHSCT) to design, conduct and recruit patients to the study. Informed consent to participate was obtained from all RA patients enrolled to the study. One hundred patients identified using following inclusion/exclusion criteria were recruited into the prospective observational cohort study: Remote Arthritis Disease Activity MonitoR (RADAR); ClinicalTrials.gov Identifier: NCT02809547. Inclusion criteria: aged between 18–90 years, diagnosed with RA (according to American College of Rheumatology criteria [5,16]), diagnosed with RA for a minimum of 1 year and maximum 10 year duration, active disease flares on a regular basis, and receiving a disease-modifying anti-rheumatic drug (DMARD). Exclusion criteria: any other inflammatory conditions, any infections or trauma during study period, and have restricted hand function (determined by clinical team). Office for Research Ethics Committees Northern Ireland (ORECNI) (16/NI/0039), Ulster University Research Ethics Committee (UREC) (REC/16/0019) and WHSCT (WT/14/27) approvals were obtained for the study. Informed consent was obtained from all RA patients enrolled to the study.

Venepuncture whole blood samples as part of the normal routine care pathway were forwarded to the hospital laboratories for multiple tests including CRP, ESR, Bilirubin, Liver enzymes and full blood count. An additional 5-mL EDTA tube of blood was collected from each of the 100 participants for DNA genotype and drug metabolite analyses within the RADAR study. Samples were collected at both study baseline and at a 6-week follow-up appointment at an outpatient rheumatology clinic for all participants. Additionally, a sub cohort of 30 of the above participants were supplied with a kit containing sufficient dried blood spot (DBS) cards [17], finger lancets and pre-paid and addressed postal envelopes with desiccant and biohazard sealable pouch to send a weekly samples (approximately 3–5 droplets of blood ~20 μL each) from home to the NICSM laboratory for drug metabolite analysis. Finger lancet blood droplets were deposited onto dried blood spot (DBS) Protein Saver 903TM cards (Whatman, GE Healthcare Life Sciences, Buckinghamshire, UK), pre-treated with a protein stabiliser coating.

Endpoint genotyping analysis was carried out using the LightCycler 480 real-time PCR system (ROCHE). The assay is based on the competition during annealing between probes detecting the wild type and the mutant allele. The 5′-exonuclease activity of DNA polymerase cleaves the doubly labelled Taqman probe hybridised to the SNP-containing sequence, once cleaved, the 5′-fluorophore is separated from a 3′-quencher. Two allele-specific probes carrying different fluorophores (VIC®, emission: 554 nm and FAMTM, emission: 518 nm) permits SNP determination in a single well without any post-PCR processing. Genotype is determined from the ratio of intensities of the two fluorescent probes at the end of amplification (endpoint instead of the entire cycle in conventional PCR).

2.7. Validation of Polymorphisms by Pyrosequencing

Validation of SNP genotyping results from the Taqman assays was performed on a subset of samples using pyrosequencing. Due to the high number of SNPs to cover, a method using a universal biotinylated primer was employed [19]. Briefly, this method involves the use of standard target specific primer pairs with a universal M13 sequence at the 5′ end of one of the primers. A third, biotinylated M13-targeting primer is included in the PCR amplification reaction, leading to incorporation of biotin into the PCR product without the need for individual biotin labelling of each individual primer pair and thus lowering the cost of pyrosequencing considerably. A list of primers used for pyrosequencing are shown in Table S3.
PyroMark Assay Design Software 2.0 (Qiagen) was used for primer design in the SNP calling assay design format. PCR amplification was carried out using the Pyromark PCR kit (Qiagen) in 25 μL total volumes with 10–20 ng DNA and final concentrations of 0.2 mM for each primer. Standard PCR cycling conditions were used as per manufacturer’s instructions and were consistent for all samples and targets. PCR products were checked by agarose gel electrophoresis and those with a positive single band of the expected size were taken forward into pyrosequencing on the Pyromark Q48 (Qiagen) using standard manufacturers protocols and the instrument run setting for SNP calling.

Statistical analysis was carried out with SPSS ver.25 (IBM Corp, NY, USA), SciPy module (ver. 1.3) for Python (version 3.7.2) and R (version 3.60) with p < 0.05 considered as statistically significant, all within 95% confidence intervals. Descriptive statistics were used to characterise the variability in mean MTX, MTX-7-OH and MTX2PG–5PG and MTXtotal concentrations between different genotype groups of patients. Normality of data was determined using the Shapiro-Wilks test in SPSS (ver. 25) prior to employing the Kruskal–Wallis non-parametric (distribution free) one-way ANOVA, with Dunn–Bonferroni post hoc test to assess differences between genotype group means using GraphPad Prism version 8.0.0 for Windows (GraphPad Software, San Diego, CA, USA, www.graphpad.com).
The Hardy-Weinberg equilibrium was assessed for SNPs with significant clinical associations in the methotrexate treated cohort. A Chi-square test with Benjamini-Hochberg adjusted p values was used to assess if there were significant differences between the genotype frequencies expected from dbGAP European population and those observed. Power was calculated for the same SNPs using the GENPWR package [20] within R (v 4.0.2), using the linear regression model (with alpha at 0.05) since the goal was to calculate power in a continuous outcome (metabolite levels) between genotypes.

A total of 100 participants, n = 68 female and n = 32 male, with active rheumatoid arthritis were enrolled to this study (Table 1). The mean age of study participants was 59.5 years with a mean disease duration of 6 years and mean baseline disease activity score (DAS28ESR) of 3.6.
A subgroup of n = 66 participants (n = 46 female) were treated with weekly methotrexate at baseline was identified for subsequent genotype association analyses. Baseline and 6-week follow-up drug dose information is summarized in Table S2A,B for this main subgroup. A smaller, partially overlapping, subgroup of n = 27 participants (n = 20 female) being treated with daily sulfasalazine at baseline was also identified for subsequent analyses (Table S2B).

3.2. Single-Nucleotide Polymorphisms Analysed in this Study

Ten SNPs were analysed in this study, previous studies have linked these SNPs to various clinical consequences observed in RA patients being treated with DMARDs, documented in the PharmGKB database [21,22]. SNP genotypes were determined by endpoint PCR assay and allele specific probes (Figure 1). The SNPs characteristics and frequencies in the study cohort are summarised in Table 2.

This research was funded by the Research and Development Office, Health and Social Care NI (RADAR study), The Northern Ireland Rheumatism Trust, and Invest Northern Ireland (PoC 631/731) in support of this work. 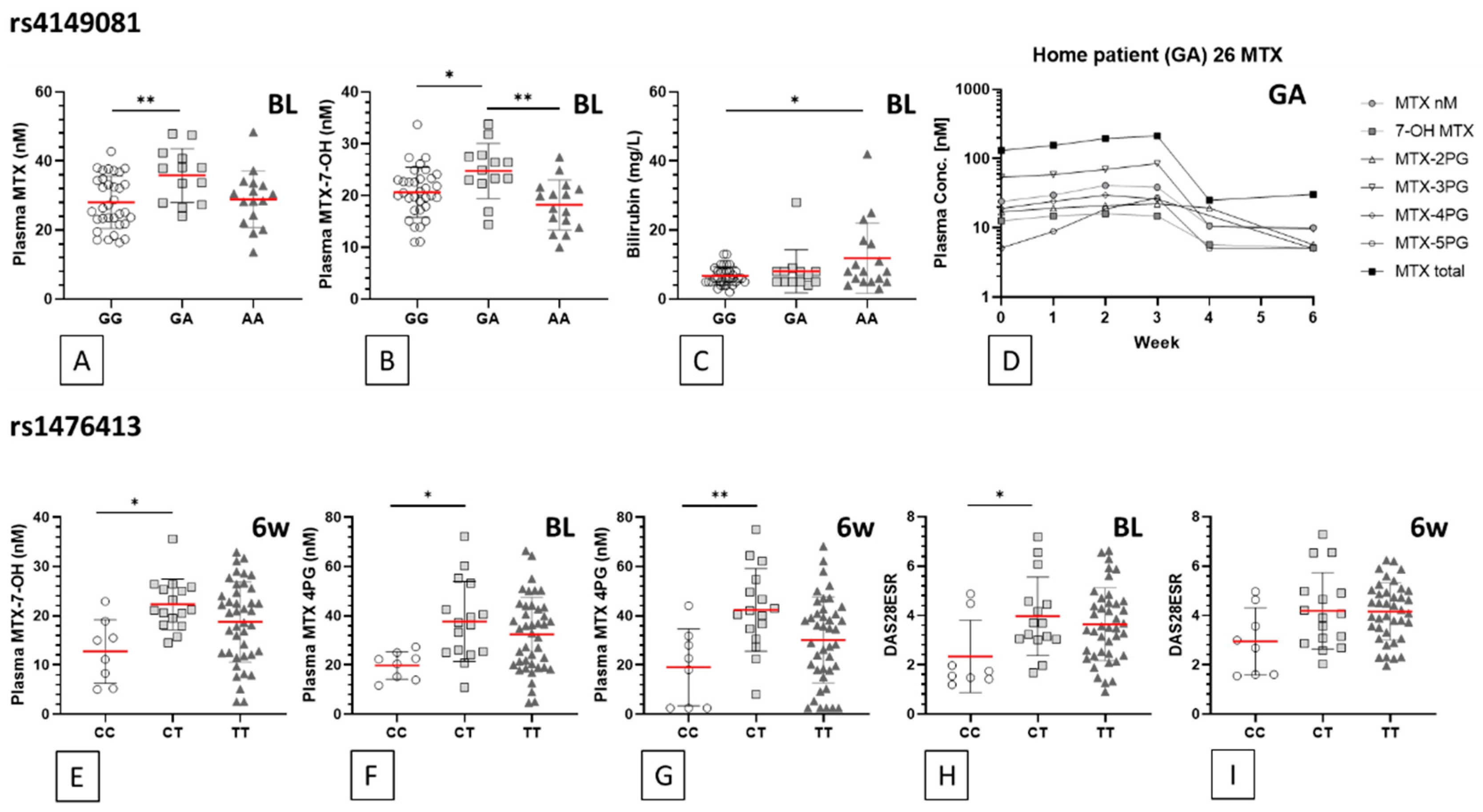 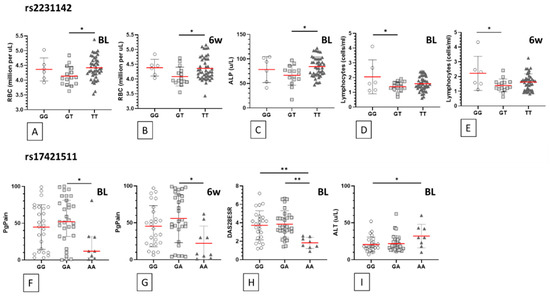