Molecular and Imaging Biomarkers in Alzheimer’s Disease: A Focus on Recent Insights
Previous Article in Journal

Introduction: Semantic memory is impaired in mild cognitive impairment (MCI). Two main hypotheses about this finding are debated and refer to the degradation of stored knowledge versus the impairment of semantic access mechanisms. The aim of our study is to evaluate semantic impairment in MCI versus healthy subjects (HS) by an experiment evaluating semantic priming. Methods: We enrolled 27 MCI and 20 HS. MCI group were divided, according to follow up, into converters-MCI and non converters-MCI. The semantic task consisted of 108 pairs of words, 54 of which were semantically associated. Stimuli were presented 250 or 900 ms later the appearance of the target in a randomized manner. Data were analyzed using factorial ANOVA. Results: Both HS and MCI answered more quickly for word than for non-word at both stimulus onset asynchrony (SOA) intervals. At 250 ms, both MCI and HS experienced a shorter time of response for related-word than for unrelated words (priming effect), while only the converters-MCI subgroup lost the priming effect. Further, we observed a rather larger Cohen’s d effect size in non converters-MCI than in converters-MCI. Conclusion: Our data, and in particular the absence of a semantic priming effect in converters-MCI, could reflect the impairment of semantic knowledge rather than the accessibility of semantic stores in MCI individuals that progress to dementia. View Full-Text
Keywords: Alzheimer disease; semantic priming; mild cognitive impairment Alzheimer disease; semantic priming; mild cognitive impairment
►▼ Show Figures 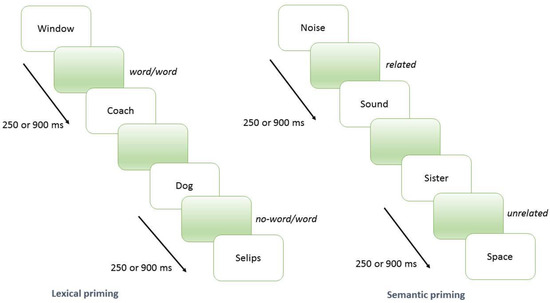