Harnessing the Potential of Stem Cells for Disease Modeling: Progress and Promises
Next Article in Special Issue

Population genomic screening has been demonstrated to detect at-risk individuals who would not be clinically identified otherwise. However, there are concerns about the increased utilization of unnecessary services and the associated increase in costs. The objectives of this study are twofold: (1) determine whether there is a difference in healthcare utilization and costs following disclosure of a pathogenic/likely pathogenic (P/LP) BRCA1/2 variant via a genomic screening program, and (2) measure the post-disclosure uptake of National Comprehensive Cancer Network (NCCN) guideline-recommended risk management. We retrospectively reviewed electronic health record (EHR) and billing data from a female population of BRCA1/2 P/LP variant carriers without a personal history of breast or ovarian cancer enrolled in Geisinger’s MyCode genomic screening program with at least a one-year post-disclosure observation period. We identified 59 women for the study cohort out of 50,726 MyCode participants. We found no statistically significant differences in inpatient and outpatient utilization and average total costs between one-year pre- and one-year post-disclosure periods ($18,821 vs. $19,359, p = 0.76). During the first year post-disclosure, 49.2% of women had a genetic counseling visit, 45.8% had a mammography and 32.2% had an MRI. The uptake of mastectomy and oophorectomy was 3.5% and 11.8%, respectively, and 5% of patients received chemoprevention.
Keywords: genomic screening; BRCA1/2; healthcare utilization; healthcare costs; uptake of risk management genomic screening; BRCA1/2; healthcare utilization; healthcare costs; uptake of risk management

Medical history-based BRCA1/2 screening has been in place for two decades, offering testing based on personal and family history criteria. Recent data suggests that less than half of the individuals with BRCA1/2 risk are identified through this approach [1]. Failure to identify cases are attributable to both the insensitivity of the approach and failure to universally apply screening [1,2]. Genomic screening programs in the general population for primary prevention is an alternative to identify individuals at risk for developing diseases who can benefit from enhanced preventive services, providing an intervention opportunity to reduce mortality and morbidity attributable to the screened conditions. There is increasing interest in implementing genomic screening programs for the general population as part of precision health, as evidenced by the All of Us research program and initiatives [3]. Genomic screening is likely to focus on the CDC tier 1 genomic applications [4,5], which are for conditions that have relatively higher prevalence, strong evidence for a gene–disease relationship, high penetrance with the potential for serious health impacts, and evidence-based effective interventions available for improving population health [6]. These include hereditary breast and ovarian cancer syndrome (HBOC), Lynch syndrome, associated with increased risk of colorectal, endometrial, and other cancers; and familial hypercholesterolemia, associated with increased risk of premature heart disease. Genetic testing is currently recommended for all these conditions in people at high risk (e.g., due to family history) [5,7]. An estimated two million people in the US have one of these conditions. Currently, these conditions are poorly ascertained by the healthcare system, and many individuals and their family members are not aware that they are at risk [8,9]. This has recently been shown in HBOC in two diverse settings [1,10]. It has been postulated that early detection through population genomic screening and intervention could potentially improve identification of risk and significantly reduce morbidity and mortality [5].
A central tenet of genomic screening in the general population is to proactively identify and manage risk at a reasonable cost [11]. However, while offering the potential to improve public health outcomes, it is unknown whether reporting population-based genomic screening results is followed by reasonable and appropriate healthcare utilization and costs. This is compounded by patient uncertainty concerning non-diagnostic genomic results, including how to use the result in the absence of other risk factors [12]. Thus, there are concerns as to whether returning genomic results from population genomic screening without a clinical indication could promote excessive and inappropriate utilization of services with the associated increases in costs, thus reducing or eliminating the potential value [13].
This study focused on one of the most prevalent and actionable conditions—HBOC, for which there is the support that genomic screening programs may better identify patients at high risk [1,14] compared to current guideline-based methods used to identify BRCA1/2 carriers [7,15,16]. Screening for pathogenic/likely pathogenic (P/LP) variants in HBOC susceptibility genes in unselected individuals can be used to assess risk and guide decision-making about surveillance (MRI/mammogram) and prophylaxis (surgical and chemopreventive) for prevention and early detection of breast and ovarian cancer [17]. To date, evidence has not been available using real-world data on healthcare utilization and costs for the follow-up period after disclosure of P/LP BRCA1/2 results via genomic screening. The objectives of this study are to: (1) determine whether there is a difference in healthcare utilization and costs following results disclosure, and (2) estimate the uptake of risk management per National Comprehensive Cancer Network (NCCN) guidelines within the first year of having a P/LP result returned.

The study population was identified from the Geisinger MyCode® Community Health Initiative (MyCode) where adult volunteers from an integrated healthcare delivery system in central Pennsylvania underwent exome sequencing using research protocols detailed in previous publications [1,18,19,20]. The study cohort was based on a population of 50,726 MyCode participants whose exome sequences were complete, were analyzed to identify potential P/LP variants, and had clinical confirmation of the research result with a report to the EHR to disclose the results between 01/01/2014 and 03/01/2016 [20]. The initial study cohort was defined as participants who received results of P/LP variants in BRCA1/2. The following inclusion criteria were further applied: female, a record of at least a one-year follow-up period post results disclosure and of being in the Geisinger Health System for at least one year prior to disclosure of the result, and no personal history of breast or ovarian cancer (Figure 1).

Participants’ demographic characteristics and healthcare utilization were obtained from the system’s electronic health record (EHR) and included all clinical encounters (inpatient, outpatient, emergency department, and other encounter types). Cost data were derived from the health system’s Decision Support Systems (DSS) electronic billing data, which contains detailed information on actual total costs and revenues/payments received for all medical services and physician procedures that each patient receives. We used the actual total payment amount received to calculate the costs of the patients’ medical care utilization from an insurance payor perspective. Surgical procedures and imaging procedures were identified using Current Procedural Terminology (CPT) codes. Imaging codes were supplemented with system-specific EHR codes. Chemoprevention uptake was obtained using medication identifiers and ICD9/ICD10 diagnosis codes (Table S1). Genetic counseling visits were tracked in a database maintained by the genomic screening and counseling program. Chart review and additional study data sources were used to determine whether participants had prior clinical BRCA1/2 genetic testing and to assess family history information for risk evaluation. In this study, a positive family history is defined as at least one first-degree relative or at least two second-degree relatives with BRCA1/2-related cancer (breast cancer, ovarian cancer, prostate cancer, pancreatic cancer, or melanoma). This information was based on a three-generation pedigree taken by a genetic counseling visit, a note from a provider, or the family medical history tab in the EHR regarding BRCA1/2-relevant cancers.

We analyzed the uptake of NCCN-recommended risk management in the first year post-disclosure. This includes surveillance recommendations using mammography and breast Magnetic Resonance Imaging (MRI), and recommendation or consideration of risk-reducing procedures and medications (mastectomy, salpingo-oophorectomy, chemoprevention). We also analyzed the uptake of genetic counseling visits as part of the MyCode genomic screening program. For uptake analysis, we conducted analysis only on patients who were eligible for the specific recommended service, e.g., for the uptake of mammogram/MRI, we only included women who were older than 25 years old [21]. The analysis of uptake of NCCN-recommended services was further stratified by age (≥40 years old, <40 years old), BRCA1 and BRCA2, family history (positive, no, missing), and whether P/LP BRCA1/2 was previously known.

Descriptive statistics were used to summarize patient demographics, healthcare utilization, and costs in the pre- and post-disclosure periods, as well as the uptake of guideline-recommended risk management in the first year following the result disclosure. Statistical differences in healthcare utilization from pre- to post-disclosure were evaluated with McNemar’s exact test for categorical variables. We applied a boot-strapping approach to calculate 95 percent confidence intervals for continuous variables and corresponding p-values as the power calculation showed an insufficient sample size to conduct paired t-tests. For cost outcomes, we reported average and median total costs per patient and the average cost difference per patient in the pre- and post-disclosure periods, which were compared using the Wilcoxon signed-rank test due to the paired nature of the data. No discount rate was applied to the costs expressed in 2016–2017 US dollars given the relatively short 2-year study period and close proximity of the two time periods. All statistical analyses were conducted using Stata version 14 (StataCorp, College Station, TX, USA).

The final study cohort included 59 women who received P/LP BRCA1/2 results. Table 1 shows the demographics of the study cohort. The population was predominately white, not Hispanic or Latino. The mean age was 53 years, ranging from 24 to 90 years, with over 70% of patients being 40 years or older. The majority of the study population had the BRCA2 variant (80%). There were 48 patients (81.4%) who had not undergone prior clinical testing and were unaware of their P/LP status. Family history of BRCA1/2 relevant cancer was reported in 38 (64.4%) patients, while 12 (20.3%) patients reported a negative family history, and family history information was missing on the remaining 9 (15.3%) patients.

Table 2 compares the healthcare utilization pre- and post-disclosure. In the entire study cohort, from the pre- to the post-disclosure period, there were no statistically significant changes observed in the percentage of patients with any outpatient (89.8% vs. 88.1%), inpatient (40.7% vs. 33.9%), or other encounter visits (74.6% vs. 74.6%). In terms of the average number of visits per patient, both the number of outpatient (7.37 vs. 6.93) and inpatient visits (0.63 vs. 0.51) did not change significantly from pre- to post-disclosure. A sub-analysis on those who had a previously unknown P/LP BRCA1/2 variant (n = 48) showed similar results.

During the first year post-disclosure, 29 (49.2%) women had a genetic counseling visit. About one-third (32.2%) of women in the cohort had an MRI and 45.8% had undergone mammography. Due to the one-year post-disclosure study timeframe coupled with the practice that some providers may apply of alternating breast MRI and mammogram every six months (“Breast Cancer Screening Guidelines. Memorial Sloan Kettering Cancer Center”, 2019), we included uptake of either a breast MRI or mammogram (49.2%). The overall uptake of mastectomy was 3.5% and uptake of oophorectomy was 11.8%. We observed uptake of chemoprevention at 5% (Table 4). The uptake rates in stratified sub-cohorts are detailed in Table 4.

This research was funded by Geisinger Internal Grant.

Authors claim no conflicts of interest. 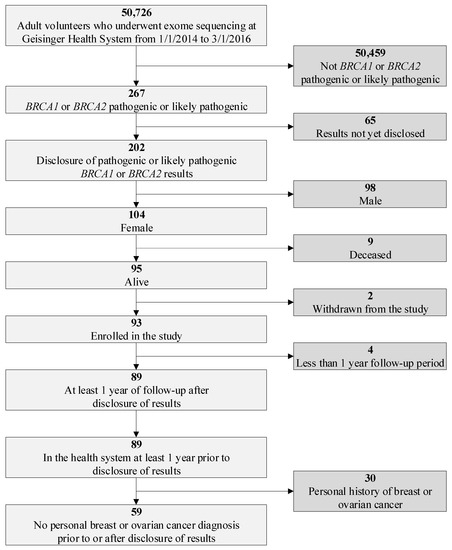