Background: Despite the significance of colonoscopy for early diagnosis of colorectal adenocarcinoma (CRC), population-wide screening remains challenging, mainly because of low acceptance rates. Herein, exosomal (exo-miR) and free circulating microRNA (c-miR) may be used as liquid biopsies in CRC to identify individuals at risk. Direct comparison of both compartments has shown inconclusive results, which is why we directly compared a panel of 10 microRNAs in this entity. Methods: Exo-miR and c-miR levels were measured using real-time quantitative PCR after isolation from serum specimens in a cohort of 69 patients. Furthermore, results were compared to established tumor markers CEA and CA 19-9. Results: Direct comparison of exo- and c-miR biopsy results showed significantly higher microRNA levels in the exosomal compartment (p < 0.001). Exo-Let7, exo-miR-16 and exo-miR-23 significantly differed between CRC and healthy controls (all p < 0.05), while no c-miR showed this potential. Sensitivity and specificity can be further enhanced using combinations of multiple exosomal miRNAs. Conclusions: Exosomal microRNA should be considered as a promising biomarker in CRC for future studies. Nonetheless, results may show interference with common comorbidities, which must be taken into account in future studies.
Keywords: exosome; microRNA; colorectal carcinoma; biomarker exosome; microRNA; colorectal carcinoma; biomarker

Nearly 1.2 million patients are newly diagnosed with a colorectal carcinoma (CRC) every year, making this entity one of the most common and best studied cancer types worldwide [1]. Slowly progressing, dysplastic adenomas are the most common precursor lesions of CRC, and are part of the adenoma-carcinoma-sequence that presents with a characteristic accumulation of genetic mutations [2,3]. For early detection of CRC, frequently inexpensive and non-invasive fecal occult blood tests (FOBT) or fecal immunochemical tests (FIT) are used, as they have been shown to improve mortality even if they are clearly limited in sensitivity and specificity [4,5]. In contrast, colonoscopy as the golden standard, shows a high sensitivity for the detection of (pre-) cancerous lesions but remains invasive [6], with acceptance in the population being low [7].
Currently used serum biomarkers, such as carcinoembryonic antigen (CEA) or carbohydrate antigen 19-9 (CA19-9), are not recommended for early diagnosis, but for monitoring therapy response in advanced CRC and for detection of recurrent disease [8,9,10]. Therefore, there is a need for highly accurate detection of CRC using minimal invasive biomarkers [11], although using colonoscopy remains inevitable for diagnosis.
A promising class of new biomarkers are small non-coding microRNAs (miRs). They are known to regulate gene expression on a post-transcriptional level by silencing diverse mRNAs and thereby controlling multiple biological processes [12]. Many studies highlight the prognostic and diagnostic significance of tissue and blood-based miRNAs in CRC [13,14,15,16]. However, published results demonstrate a high variability and sometimes conflicting data for specific miRNAs. Another group of promising biomarkers are extracellular vesicles (EVs), and in particular their smallest members, the exosomes. These small spherical vesicles originate from the multivesicular body in the cytoplasm, and are actively secreted into the extracellular space [17]. Exosomes play a crucial role in cell–cell communication and promote the pathogenesis of neoplastic diseases [18]. Remarkably, miRNAs detected in exosomes circulating in the blood show a striking potential as recurrence marker for CRC [19]. EV- and exosome-associated biomarkers provide some advantages over freely circulating biomarkers, as they are protected within exosomes from degradation by proteases or nucleases as a result of their efficient lipid bilayer [20]. Since they furthermore are produced by a unique mechanism [17], exosomes have been proposed to mirror the pathophysiological state of the releasing cells [21,22,23]. Among other studies, this has been demonstrated in chronic myelogenous leukemia cell lines after curcumin treatment using a selective miR-21 sorting into exosomes [24]. Some studies have confirmed the high potential of exosomal miRNAs in the diagnosis and prognosis of diverse cancers, and also CRC [19,25,26]. However, only a few studies compared directly the diagnostic power of free circulating and exosomal miRNAs [26,27,28]. Therefore, the present study assessed profiles of promising miRNA candidates, side by side in exosomes and in the serum of patients suffering from CRC, as well as of patients with colorectal adenomas and healthy individuals as controls. Furthermore, obtained results were compared with established CRC tumor markers.

Serum samples from a total of 69 patients and donors were investigated in the present study. Among them were 23 patients with CRC, 20 with adenoma and 26 healthy individuals. In CRC patients, samples were prospectively collected at time prior to any treatment, and in adenoma patients prior to routine screening colonoscopy. Patient details are provided in Table 1.
All adenomas and carcinomas were histologically confirmed by an experienced pathologist blinded to patients’ histories. Histologic classification was performed according to the most recent recommendations by the World Health Organization [29], and the latest TNM classification [30]. Advanced adenomas were defined as adenomatous polyps with a size ≥10 mm, ≥25% of villous features or a high-grade dysplasia [31]. Patients with any hereditary form of colorectal carcinomas, history of familial adenomatous polyposis (FAP), Lynch syndrome, inflammatory bowel disease or second primary malignancies at present or past were excluded from the study.
The study was approved by the Institutional Review Board (IRB) of the University Hospital of Bonn (Number: 021/16) 10.02.2016. Blood samples were collected in donors and in patients who were treated at the University Hospital of Bonn, or at affiliated academic institutions between 2011 and 2016, and after written consent was obtained.

Blood samples were collected and carefully processed within a maximum of 4 h after collection by an experienced team, in order to ensure high quality pre-processing standards. All samples were centrifuged at 3000× g for 10 min at room temperature for removal of cells and debris. Supernatants were transferred into fresh cryotubes and stored until analysis at −80 °C or were immediately processed. All samples underwent a visual inspection for hemolysis. Red, discoloured or otherwise contaminated samples were excluded from further examination.

Total exosomal RNAs were extracted from serum using the exoRNeasy Serum/Plasma Kit (Qiagen GmbH, Hilden, Germany). One milliliter of serum was processed according to the manufacturer’s protocol. In brief, serum was homogenized with QIAzol Lysis reagent Qiagen GmbH, Hilden, Germany), and 5 fmol/µL of Cel-miR-39 “spike-in control” was added for extraction control.
Following phenol/guanidine-based combined lysis, membrane-based affinity binding centrifugation was performed, which is described in detail in the manufacturer’s protocol. Exosome separation was then achieved by a chloroform and ethanol-based centrifugation step. To maximize the RNA amount in the last spin protocol step, the RNeasy MinElute spin columns were washed twice using 14 µL of RNase-free water. Each MiRNA concentration was measured in duplicate using an Infinite® 200 PRO series spectral photometer (Tecan). Mean measurements of both exo-miR concentrations were used for all further analyses. Particle size of exosomal RNA was measured in selected cases. Herein, we used the ZetaView® BASIC NTA-Nanoparticle Tracking Video Microscope (https://www.particle-metrix.de/en/products/zetaview-nanoparticle-tracking, accessed date: 28 April 2022) for size comparison and verification.

Values are expressed as means or medians unless otherwise stated. Statistical analyses were performed with the assistance of QuoData GmbH-Quality & Statistics (Dresden, Germany).
MiRNA quantity and tumor markers were assessed for their potential discrimination between the groups. MiRNA levels and tumor markers were log transformed for variance stabilization. Continuous variables were compared using Fisher’s exact test, Mann–Whitney U or the Kruskal–Wallis test, whereas categorical variables were matched using the χ2 test (chi-square) where appropriate. Outliers were identified using Grubbs’ test (significance level 1%) and then excluded from further analysis. Areas under the curve (AUC) of receiver operating characteristic (ROC) curves were calculated, and sensitivities at a 95% specificity level are shown. p-values of <0.05 were considered to be statistically significant. Statistical analyses were performed with SPSS (IBM, Armonk, NY, USA, version 23) and GraphPad Prism 4 (GraphPad Software Inc., San Diego, CA, USA).

3.1. Circulating miRNAs Are Concentrated in Exosomes

3.2. MiRNA Levels in the Exosome Compartment Differentiate between Disease Groups

In comparison to exo-miRNAs, none of the tested serum miRNAs distinguished CRC from healthy controls (all > 0.05). However, all serum miRNAs showed different median-normalized microRNA levels when adenomas and controls were compared (Supplementary Table S6, details in Supplementary Table S7). Additionally, all but two free circulating miRNAs in serum (c-miR-19 and c-miR-222) revealed divergent median levels between the adenoma group and the CRC group.

This research was funded by the German Federal Ministry of Education and Research–BMBF: Grant Nr. 13N12852.

The study was conducted in accordance with the Declaration of Helsinki, and approved by the Institutional Review (IRB) of the University Hospital of Bonn (Number: 021/16) at 10 February 2016.

We are grateful for the support of Zumfelde and Mayershofer who provided us with blood samples from adenoma patients. 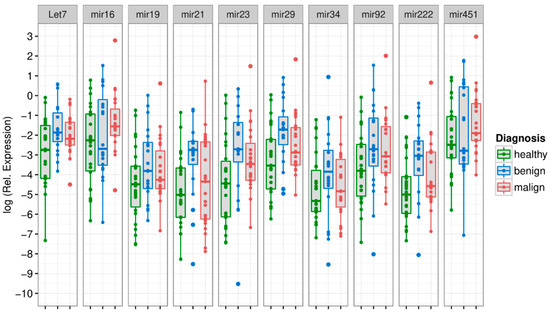 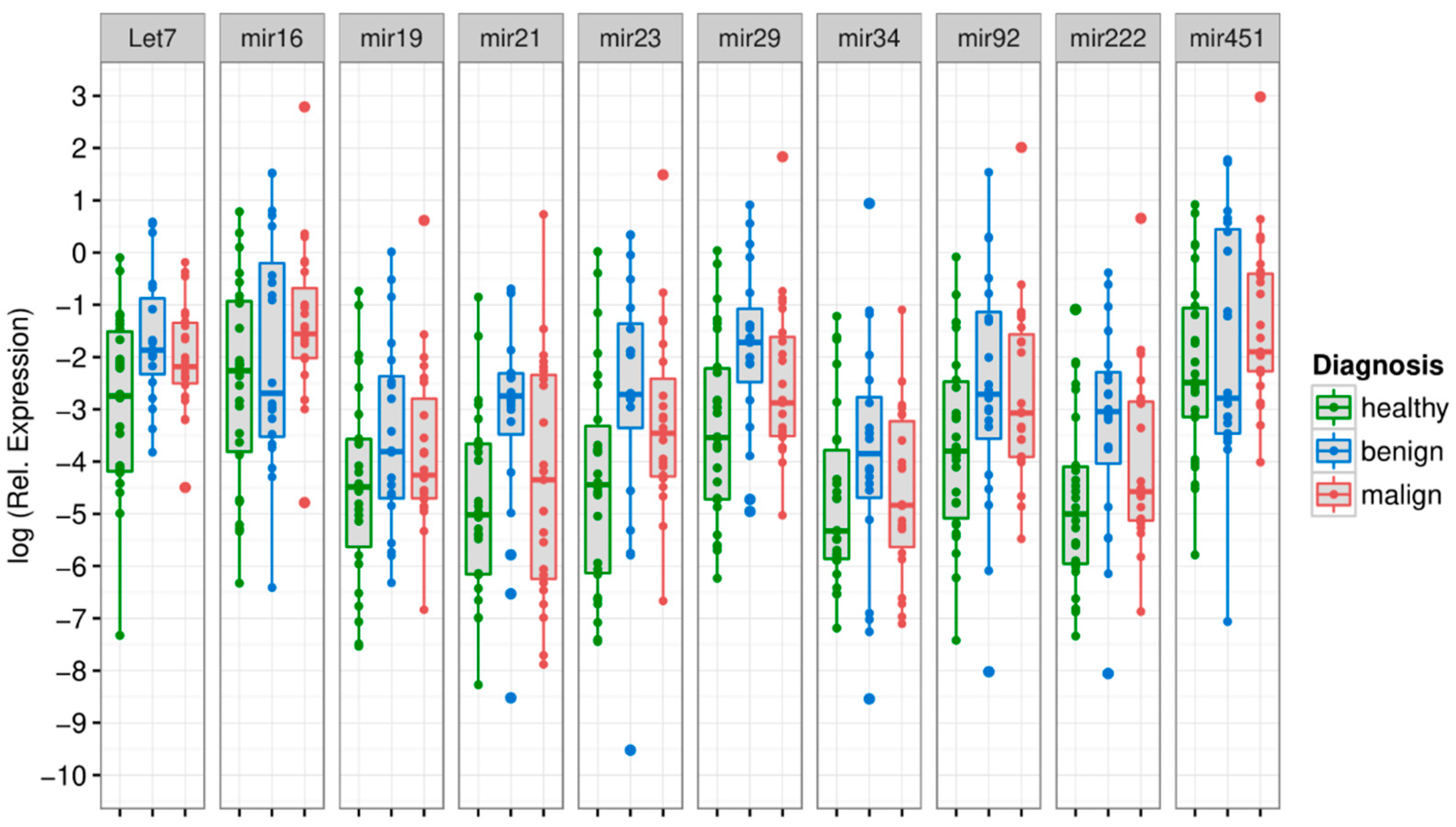