:
Due to the beginning of vaccination against COVID-19, serological discrimination between vaccine-associated humoral response and serology-based surveillance of natural SARS-CoV-2 infections as well as breakthrough infections becomes an issue of relevance. Here, we assessed the differentiated effects of the application of an RNA vaccine using SARS-CoV-2 spike protein epitopes on the results of both anti-spike protein–based serology (EUROIMMUN) and anti-nucleocapsid-based serology (VIROTECH). A total of 80 serum samples from vaccinees acquired at different time points after vaccination was assessed. While positive or borderline serological response in the anti-spike protein assay was observed for all samples (90% both IgG and IgA, 6.3% IgA only, 3.8% borderline IgG only), only a single case of a falsely positive IgM was observed for the anti-nucleocapsid assay as expected due to this assay’s specificity. Positive anti-spike protein antibodies were already detectable in the second week after the first dose of vaccination, with higher titers after the second dose of the vaccine. In conclusion, the combined application of anti-spike protein–based serology and anti-nucleocapsid-based serology will provide a useful option for the discrimination of vaccination response and natural infection.
Keywords:
SARS-CoV-2; COVID-19; serology; vaccination; surveillance; nucleocapsid; spike protein

Assessed samples comprised 80 sera of volunteers vaccinated with the Comirnaty COVID-19 mRNA vaccine from BioNTech (Mainz, Germany) and Pfizer (Puurs, Belgium) [36], collected after the first or second vaccination. The sera were stored in the refrigerator at 2 to 8 °C prior to assessment for a maximum of 2 days. The vaccinees were healthcare workers at the University Medical Center Göttingen, Germany.

The compared serological assays comprised the spike-protein-based EUROIMMUN COVID-19 IgG/IgA assay (EUROIMMUN, Lübeck, Germany; referred to as “EUROIMMUN assay” in the following) and the nucleocapsid-based VIROTECH SARS-CoV-2 IgA/IgM/IgG ELISA (Rüsselsheim am Main, Germany; referred to as “VIROTECH assay” in the following). Both assays were performed exactly as described by the manufacturers.

Correlation between the titers of the anti-spike protein antibodies and the time from first and second vaccination until sample acquisition as well as the vaccinees’ age at sample acquisition was calculated applying Spearman’s correlation coefficient after conducting a significant Shapiro–Wilk test for normal distribution.
Wilcoxon’s rank sum test was applied to detect statistical differences for the anti-spike protein antibody titers between males and females and between individuals who received one or two vaccinations.

The study was ethically approved by the institutional ethics board of the University Medical Center Göttingen (identification code 21/05/20, provided on 21 May 2020).

3.3. Correlation of the Time in Days between the Last Vaccine and Sample Acquisition, Age, Sex and the Measured Titers

The study was conducted to differentiate the vaccination with RNA-based vaccines using epitopes of the SARS-CoV-2 spike protein (SARS-2-S) [1,2,3,4] as a proof-of-principle assessment. First of all, positive or borderline results for anti-spike protein antibodies were observed for all assessed vaccinees, irrespective of vaccination status with just one or with two vaccine doses. In contrast, anti-nucleocapsid IgA and IgG antibodies did not occur in the vaccinees. The single positive IgM result among the 80 assessed samples is as expected in line with the previously calculated specificity of the applied VIROTECH anti-nucleocapsid-IgM assay between 94% and 96.7% as indicated in a previous study [12]. Accordingly, the reported single positive IgM result can most likely be judged as a false positive. Hypothetically, a very early stage of a breakthrough infection is an alternative explanation, so follow-up assessment is recommended in case of such a serological reaction pattern. In this specific case, serological follow-up was unfeasible as the respective volunteer agreed to one blood sample acquisition only. However, in retrospect, when asked, the subject reported no symptoms of a mild upper respiratory tract infection at the relevant time.
Considering the acceptable sensitivity and specificity of the VIROTECH assay with samples from patients with COVID-19 as shown elsewhere [12], our data suggest that a combination of anti-spike protein–based serology and anti-nucleocapsid-based serology can be used to discriminate spike-protein-based vaccination-induced antibody titers from antibodies after acute SARS-CoV-2 infections as well as from potential antibodies due to breakthrough infections in spite of vaccination.
Secondly, it could be shown that anti-spike protein antibodies are already measurable early after vaccination. While 72 vaccinees showed a combination of positive IgG and IgA against the SARS-CoV-2 spike protein, five individuals with samples acquired at very early time points—9 to 11 days after the first vaccine—expressed IgA but still no IgG antibodies. This pattern was not observed at later time points of sample acquisition, suggesting its occurrence at early stages after vaccination only.
A pattern of borderline IgG anti-spike protein antibodies without measurable IgA antibodies, which was observed, compared to the study median, in older vaccinees once after the first and twice after the second vaccine dose, calls for further follow-up. Although this pattern was observed in less than 5% of the vaccinees, it raises the question of potentially insufficient humoral response toward the vaccination applied.
Thirdly, associations of antibody-titers with factors such as age, sex, and time between vaccination and serum sample acquisition were assessed. While respective correlations were generally weak, at least significance for higher anti-spike protein antibody titers in individuals after the second vaccination compared to patients with only one vaccine dose could be shown.
The study has a number of limitations. Firstly, the comparable low number of only 80 vaccinees allows a preliminary interpretation only. Secondly, the intervals between vaccination and sample acquisition were arbitrary and defined by the accessibility of the vaccinees for the sample acquisition. Thirdly, a sample acquisition on a daily basis would have been desirable to assess the seroconversion process. However, this procedure was not feasible for organizational reasons. Fourthly, neutralizing potential of the measured antibodies was not tested, as the correlation of the results of the used serological assays to the results from neutralization tests has already been demonstrated in preliminary studies [7]. Also, the scope of the work was not the confirmation of the neutralizing potential of vaccine-related antibodies but just the establishing of a ready-to-perform approach of serological discrimination of post-vaccination antibodies and wildtype virus infection–related ones in the diagnostic routine.

In a small group of recently vaccinated individuals, anti-spike protein antibodies were very consistently recorded, while anti-nucleocapsid antibodies were virtually absent. In spite of the limitations mentioned, the assessment strongly suggests combined application of anti-spike protein–based serology and anti-nucleocapsid-based serology for the discrimination of responses after spike-protein-based vaccination and natural infections. Although not directly assessed in this study, it is likely that this may also apply to breakthrough infections. Positive anti-spike protein antibody results can be expected early after vaccination, although higher titers are seen after the second vaccine. Larger studies are recommended to confirm these preliminary results. From the practical clinical point of view, a combination of serological assays for the discrimination of anti-spike protein antibodies and anti-nucleocapsid antibodies is recommended, if a recent breakthrough infection with SARS-CoV-2 is to be confirmed in vaccinees for clinical, hygiene-related, or surveillance purposes.

The APC was funded by the Open Access Support Program of the Deutsche Forschungsgemeinschaft and the publication fund of the Georg-August-Universität Göttingen.

The study was ethically approved by the institutional ethics board of the University Medical Center Göttingen (identification code 21/05/20, 21 May 2020).

Written informed consent has been obtained from the volunteers.

All relevant data are provided in the manuscript and its tables.

We are grateful to Luisa Rittmeier and Manuela Resa for excellent technical assistance. 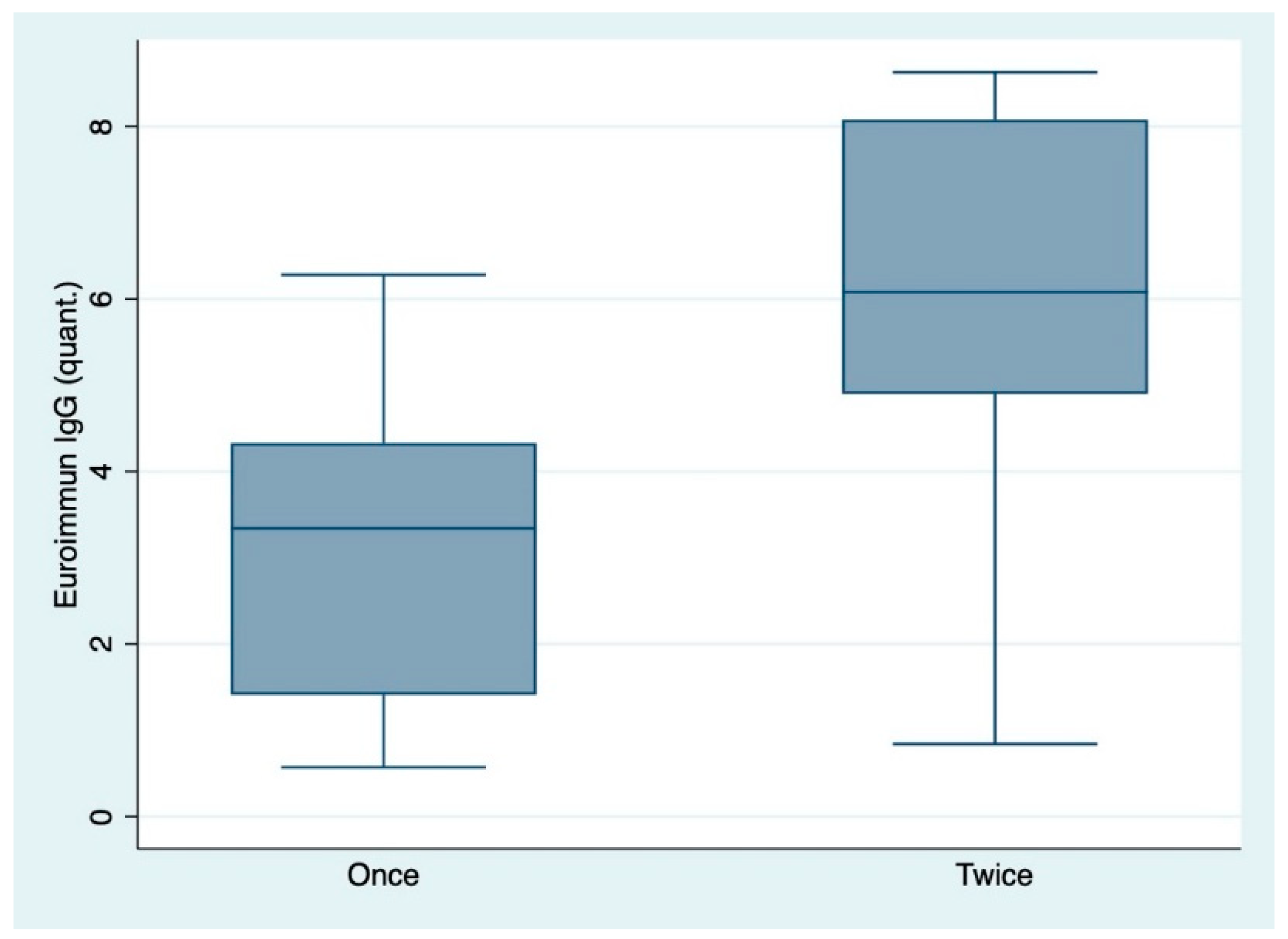