Lung cancer is a well-known malignant tumor of the respiratory tract, which has caused a significant level of damage to human health in the 21st century. Micro-RNAs (miRNAs) are tiny, non-coding RNA stem-loop structures with a length of roughly 20–25 nucleotides that function as powerful modulators of mRNA and protein products of a gene. miRNAs may modulate many biological processes involving growth, differentiation, proliferation, and cell death and play a key role in the pathogenesis of various types of malignancies. Several accumulating pieces of evidence have proven that miRNA, especially miR-146a, are crucial modulators of innate immune response sequences. A novel and exciting cancer research field has involved miRNA for the detection and suppression of cancer. However, the actual mechanism which is adopted by these miRNA is still unclear. miRNAs have been used as a cancer-associated biomarker in several studies, suggesting their altered expression in various cancers compared to the normal cells. The amount of expression of miRNA can also be used to determine the stage of the disease, aiding in early detection. In breast, pancreatic, and hepatocellular carcinoma, and gastric cancer, cancer cell proliferation and metastasis has been suppressed by miR-146a. Changes in miR-146a expression levels have biomarker importance and possess a high potential as a therapeutic target in lung cancer. It retards epithelial-mesenchymal transition and promotes the therapeutic action of anticancer agents in lung cancer. Studies have also suggested that miR-146a affects gene expression through different signaling pathways viz. TNF-α, NF-κB and MEK-1/2, and JNK-1/2. Further research is required for understanding the molecular mechanisms of miR-146a in lung cancer. The potential role of miR-146a as a diagnostic marker of lung cancer must also be analyzed. This review summarizes the tumor-suppressing, anti-inflammatory, and antichemoresistive nature of miR-146a in lung cancer. View Full-Text
Keywords: miR-146a; lung cancer; biomarker; clinical pathology miR-146a; lung cancer; biomarker; clinical pathology
►▼ Show Figures 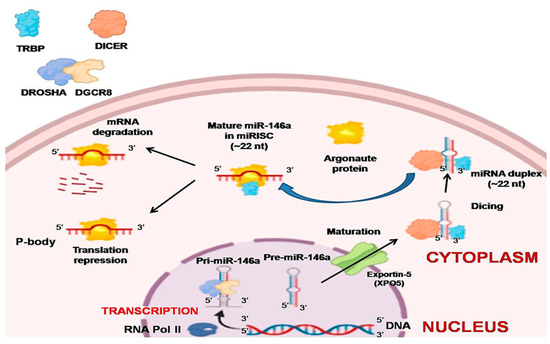