COVID-19 Diagnostics Outside and Inside the National Health Service: A Single Institutional Experience

:
The COVID-19 epidemic has been going on continuously for more than 1.5 years. Fast and reliable diagnosis is a key component of an outbreak response strategy. Our goal is to present the statistics from one of the diagnostic points of a large city in Poland. Swabs of the throat or nasopharynx of people reporting for molecular diagnostics of SARS-CoV-2 presence were taken. CE-IVD-certified RNA isolation and RT-PCR assays were used. According to our data, the prevalence of SARS-CoV-2 infection in the examined population equaled 14.7%; however, large differences were observed depending on where the sampling point was located: as much as 50.3% of positive results for samples collected at a stationary point, 36.2% for samples from inpatients and hospital staff, and only 8.9% for samples from patients whose test was paid by their employer. The age structure of the infected population was fairly even, with a slightly higher number of people over 50 years of age. Men were examined more often, but it was among women that a higher percentage of infection was recorded. Every fifth test was performed for a foreigner, but compared to Poles, a much lower incidence of infection was found in these samples. We conclude that due to the high prevalence of infection in patients from social care centers and in those referred to hospitals, it is recommended that a special sanitary regime is followed in those settings. We will evaluate the effectiveness of vaccinations, expecting that the coming months bring positive changes in the statistics on prevalence.
Keywords:
COVID-19; SARS-CoV-2; diagnostics; prevalence

At the beginning of January 2020, the first scientific papers describing the coronavirus disease 2019 (COVID-19) caused by severe acute respiratory syndrome coronavirus 2 (SARS-CoV-2) were published [1]. More than a year and a half after that, we already have a large amount of information about the pathomechanism of COVID-19, its epidemiology, health consequences, and even prevention options related to the developed vaccines.
Our goal is to present the epidemic from a different perspective, to show a lesson from the practice of a private diagnostic laboratory, which from May 2020 to the present time, has conducted diagnostics in a large city in Poland. Our aim was to present the dynamics of the prevalence of COVID-19 during the epidemic in a large city in Central Europe as well as the profile of customers who used COVID-19 diagnostics within and outside the National Health Fund.
SARS-CoV-2 diagnostics is based on a variety of tests; however, the WHO has issued a statement that suspect cases should be screened for the virus with nucleic acid amplification tests (NAAT), such as real-time reverse-transcription polymerase chain reaction (RT-PCR), reverse-transcription loop-mediated isothermal amplification (RT-LAMP), magnetic nanoparticle (MNPs)-based methods, and others, and recommend the use of the RdRp, E, N, and S genes in different combinations. Other methods, such as a serological analysis, can only be used as an aid, but do not confirm infection. RT-PCR remains a reference method with advantages such as high sensitivity, specificity, and compatibility with automation and multipanels [2]. In this paper, we present our results from RT-PCR only, although the company also performed cassette antigen tests.

Samples of nasopharyngeal swabs donated in order to perform a diagnostic test for the presence of SARS-CoV-2 RNA were analyzed. The study was performed at the private diagnostic company Molecular Pathology Center Cellgen. All participants signed an informed consent to participate in the research study. With personal data, patients provided information only about their sex, age, and place of residence.
Some of the patients, for whom it was possible, were also categorized in terms of where and how they performed the examination. We distinguished:

The results are presented in the form of descriptive statistics with the use of Microsoft Excel software. The statistical analysis was conducted with Statistica software (version 13.3, StatSoft; TIBCO Software Inc., Palo Alto, CA, USA). Chi square and ANOVA tests were used.

Overall, the number of tests performed between 1 May 2020 and 31 August 2021 was 31,964, of which 3687 were positive, 27,883 were negative, 360 were inconclusive, and 14 were non-diagnostic. A graphical representation of this result with the calculated percentage of the total study is shown in Figure 1A.
Some patients were examined more than one time. When analyzing the prevalence, understood as whether a given patient was infected with SARS-CoV-2, excluding inconclusive and non-diagnostic results, we obtained different results from the above-mentioned ones. In fact, in that case, the percentage of positive results was 14.7% (n = 3592), and the percentage of negative results was 85.3% (n = 20,853). Non-diagnostic and inconclusive results were rejected for this summary (see Figure 1B).
The data on the number of confirmed infections per unit of time are presented in Figure 2. It can be seen that the majority of infections were in October 2020, and a large number of infections were also found in March 2021 and November 2020. The cumulative data are presented in Figure 3. It can be seen that the percentage of positive tests increased in proportion to the number of tests performed, and the jumps on the line showing the positive cases coincide with a sharp increase in the number of tests performed.
The age structure of the examined participants was also analyzed. The mean and median age were 40 and 38, respectively (n = 19,262 cases with known age, calculated using PESELs—Polish ID numbers). There was a slight difference between positive (mean 42, median 39, n = 3361) and negative cases (mean 40, median 38, n = 15,901), which was statistically significant (one-way ANOVA, p < 0.001).
Graphically, the data are presented in Figure 4. However, there was no drastic difference in the prevalence depending on the age group—over 12% of prevalence was observed in each of them. In the analyzed group, the prevalence was slightly higher in the group of women. Interestingly, more men had the test ordered—13,419 men versus 9747 women, of which 1920 and 1616 had a positive result, respectively. The difference in prevalence between men (14.3%) and women (16.6%) was statistically significant (Pearson, Chi-square: p < 0.01). The comparison regarding sex is presented in Figure 5A.
Among the examined persons, 19,262 were Polish citizens (with valid PESEL numbers), while 5183 were foreigners. There was a noticeable difference in the prevalence between the two groups—among Poles it was 17.4% (n = 3361), while among foreigners only 4.5% (n = 231) (chi-square: p < 0.05). These data are graphically presented in Figure 5B.
By comparing the data on how the test was performed and who the payer was, we found that:

The above differences were statically significant (Chi-square: p < 0.05).
To sum up, 4873 tests were ordered by the National Health Fund, 6088 tests were paid by the employer, and the largest number of tests—10,610—were paid by patients. For the rest of the tests, it was impossible to determine the payer. It should be noted that there were many more laboratories in the city that performed tests ordered by the National Health Fund.
The results of the prevalence of SARS-CoV-2 infection in the above-mentioned contexts are graphically presented in Figure 6.

As the pandemic is still ongoing, there is a compelling need to accumulate statistical data and evaluate the full extent of the consequences of the COVID-19 pandemic, including its social, economic, and political impacts, in Poland. Such statistics help to monitor the effectiveness of government restrictions and vaccination. Certainly, the project would be much more informative if, apart from basic data, the respondents provided data on whether they had symptoms and comorbidities, were vaccinated—if so, with which vaccine—traveled recently, etc. However, the observations showed that that patients are tired of the COVID-19 questionnaires they have to complete in various circumstances and are reluctant to consent to participate in a study if they have to answer a time-consuming questionnaire.
This analysis is unique, to our knowledge. No study has presented, for example, statistics showing what proportion of infected people paid themselves for a test, how many of them used stationary diagnostic points or drive-thru points, and how many of them were foreigners. Although only basic statistics are presented here, they bring a lot of knowledge about diagnostics in Poland and the patients who use it. We can conclude that people living in this city are willing to incur the high costs of molecular tests, that the number of positive results is lower for patients tested in clinics than for those who are tested in hospitals, that foreigners in this city are relatively often tested but they have positive test results less often than Poles. We plan to continue anaylzing samples in the near future, expecting the epidemic to be extinguished.

Data supporting the reported results can be obtained from the corresponding author upon request.

Authors thank Cyprian Kozyra for help with the statistical analysis of the results. 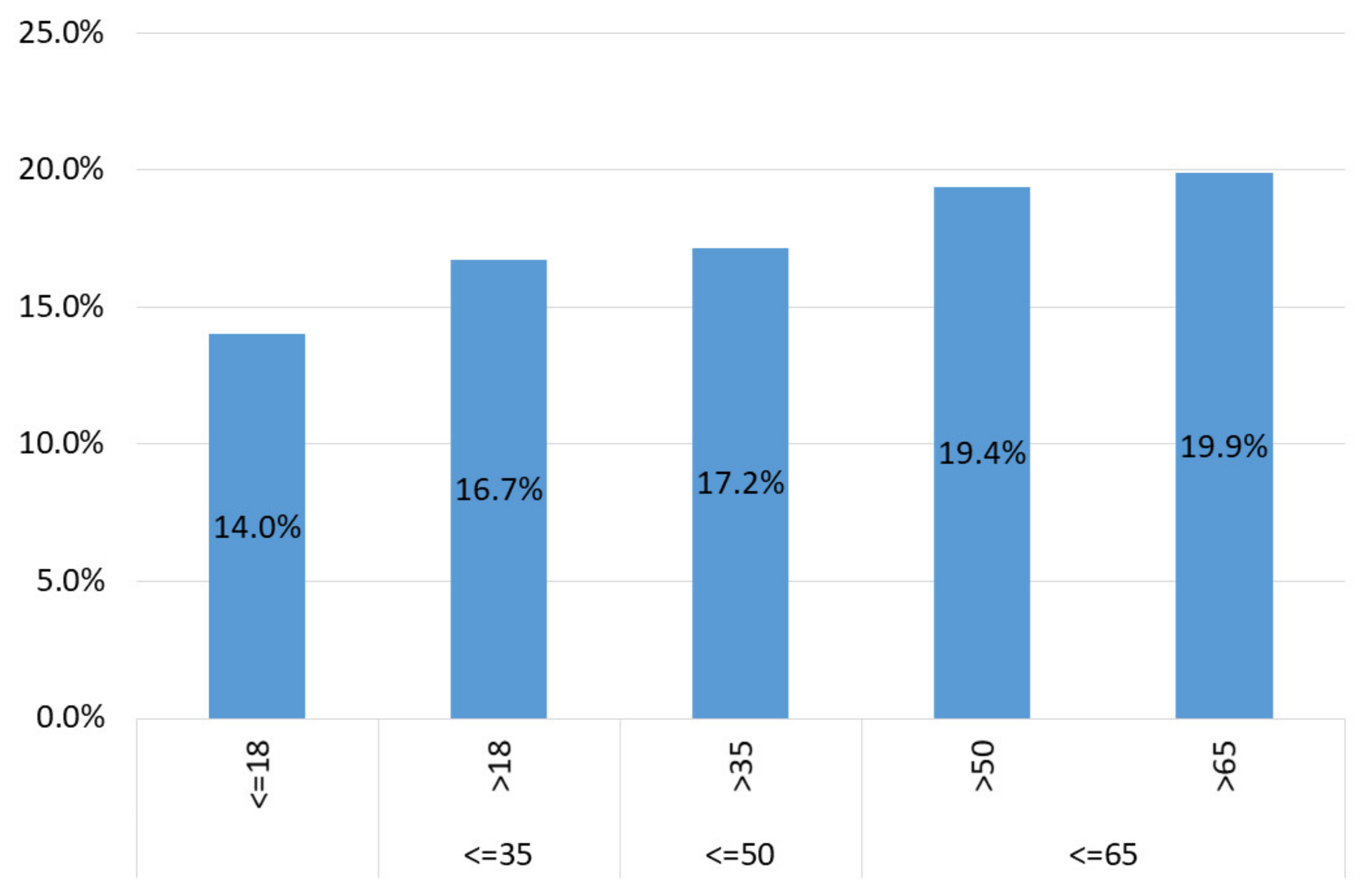 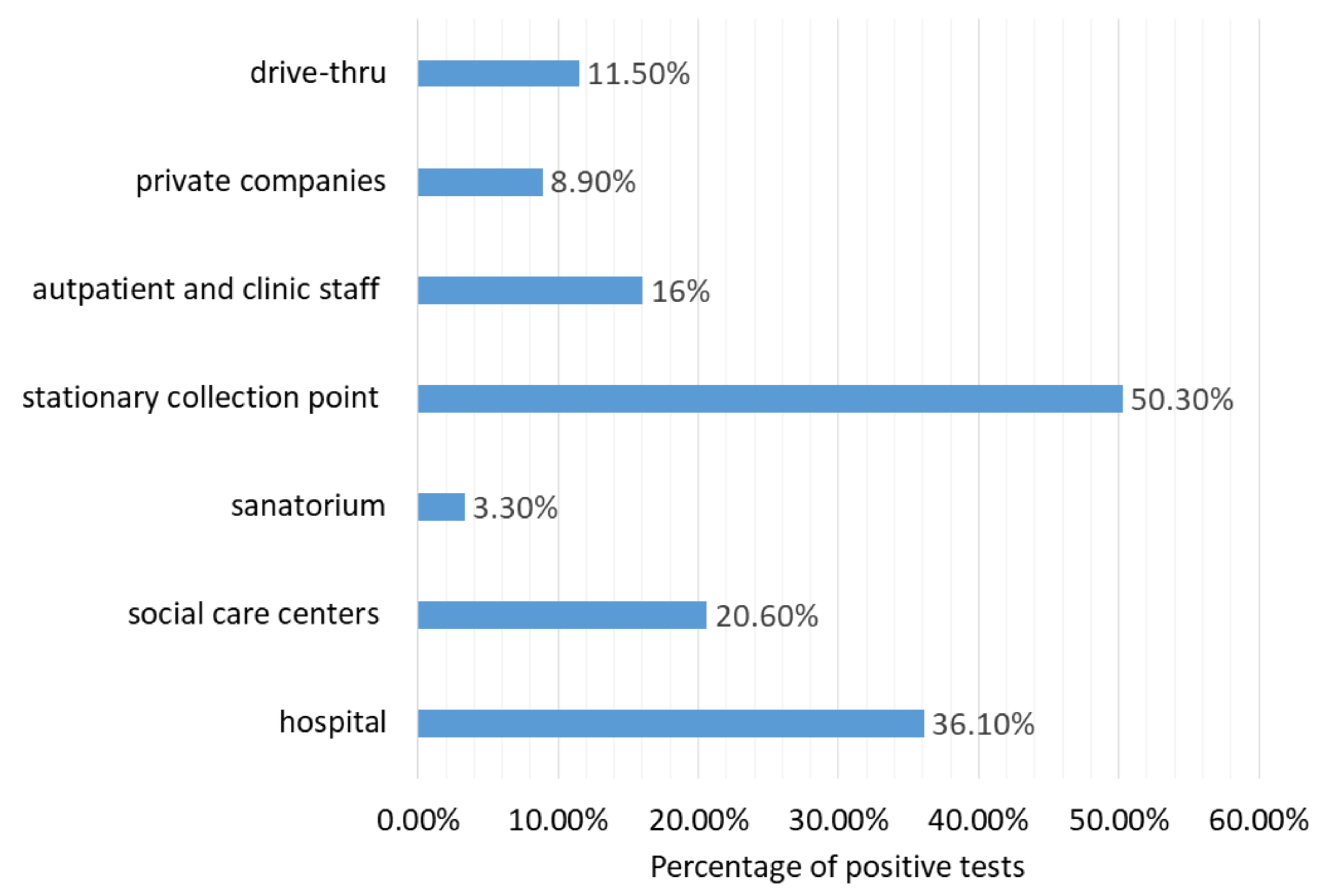