Metabolic Endotoxemia, Feeding Studies and the Use of the Limulus Amebocyte (LAL) Assay; Is It Fit for Purpose?
Previous Article in Journal

Ultrasonic cerebral tomosphygmography (UCTS), also known as “encephaloscan”, is an ultrasound-based pulsatile echoencephalography for both functional and anatomical brain imaging investigations. Compared to classical imaging, UCTS makes it possible to locate precisely the spontaneous brain tissue pulsations that occur naturally in temporal lobes. Scientific publications have recently validated the scientific interest of UCTS technique but clinical use and industrial development of this ancient brain imaging technique has been stopped notably in France, not for scientific or technical reasons but due to a lack of financing support. UCTS should be fundamentally distinguished from transcranial Doppler ultrasonography (TDU), which, although it also uses pulsed ultrasounds, aims at studying the velocity of blood flow (hemodynamics) in the cerebral arteries by using Doppler effect, especially in the middle cerebral artery of both hemispheres. Instead, UCTS has the technical advantage of measuring and locating spontaneous brain tissue pulsations in temporal lobes. Recent scientific work has shown the possibility to make an objective diagnosis of electrohypersensitivity (EHS) and multiple chemical sensitivity (MCS) by using UCTS, in conjunction with TDU investigation and the detection of several biomarkers in the peripheral blood and urine of the patients. In this paper, we independently confirm the clinical interest of using UCTS for the diagnosis of EHS and MCS. Moreover, it has been shown that repetitive use of UCTS in EHS and/or MCS patients can contribute to the objective assessment of their therapeutic follow-up. Since classical CT scan and MRI are usually not contributive for the diagnosis and are poorly tolerated by these patients, UCTS should therefore be considered as one of the best imaging technique to be used for the diagnosis of these new disorders and the follow-up of patients. View Full-Text
Keywords: electrohypersensitivity; multiple chemical sensitivity; ultrasonic cerebral tomosphygmography; encephaloscan; pulsed ultrasounds; pulsatile echoencephalography; diagnosis electrohypersensitivity; multiple chemical sensitivity; ultrasonic cerebral tomosphygmography; encephaloscan; pulsed ultrasounds; pulsatile echoencephalography; diagnosis
►▼ Show Figures 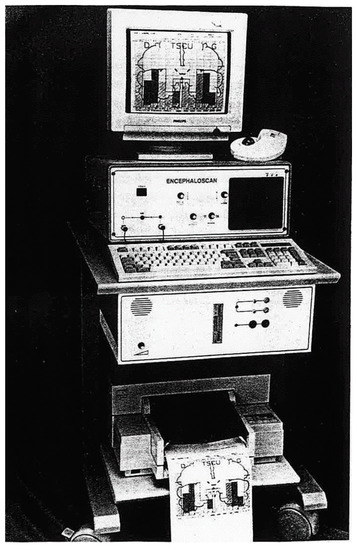 Greco, F. Technical Assessment of Ultrasonic Cerebral Tomosphygmography and New Scientific Evaluation of Its Clinical Interest for the Diagnosis of Electrohypersensitivity and Multiple Chemical Sensitivity. Diagnostics 2020, 10, 427.


Greco F. Technical Assessment of Ultrasonic Cerebral Tomosphygmography and New Scientific Evaluation of Its Clinical Interest for the Diagnosis of Electrohypersensitivity and Multiple Chemical Sensitivity. Diagnostics. 2020; 10(6):427.


Greco, Frédéric. 2020. "Technical Assessment of Ultrasonic Cerebral Tomosphygmography and New Scientific Evaluation of Its Clinical Interest for the Diagnosis of Electrohypersensitivity and Multiple Chemical Sensitivity." Diagnostics 10, no. 6: 427.