Role of Peroral Cholangioscopy in the Diagnosis of Primary Sclerosing Cholangitis

Male Breast Cancer: Results of the Application of Multigene Panel Testing to an Italian Cohort of Patients

Breast cancer (BC) is the first tumor for incidence and mortality in women [1], but it can also affect men. Indeed, male breast cancer (MBC) represents less than 1% of all BCs [2]. However, being a rare and poorly known disease, it is often diagnosed at later stages with the consequence of a poor prognosis [3].
Similarly to female breast cancer (FBC), genetic predisposition is an important risk factor in MBC [4,5]. BRCA1 [6] and BRCA2 [7] are the genes best known for their involvement in BC predisposition in both females and males [8], with an MBC risk that has been estimated of 1.2% and 6.8% by the age of 70 for carriers of variants in BRCA1 and BRCA2, respectively [9].
In recent years, thanks to the wide use of Next-Generation Sequencing (NGS), the number of genes suspected to be involved in cancer predisposition has dramatically increased [10]. This is true especially for cancers with a strong hereditary component such as FBC, in which several studies have investigated the role of genes other than BRCA1/2 [11,12,13,14,15,16,17,18,19,20]. Some studies have highlighted the role of genes such as PALB2, ATM, CHEK2, FANCM, PTEN, APC and MUTYH in MBC [21,22,23,24,25,26,27,28], thus excluding others, such as BRIP1 and RAD51C [29,30,31].
Within this complex scenario, the aim of our study was the application of multigene panel testing (MGPT) in a series of patients with MBC, in order to assess the presence of BRCA1/2 variants and identify new genes involved in the predisposition to MBC.

The study was conducted in accordance with ethical standards, the Declaration of Helsinki and national and international guidelines, and was approved by our local ethics committee (CE IRST IRCCS-AVR, protocol 2207/2012). All the patients enrolled in the study have signed an informed consent for the genetic analyses and for the use of the results for research purposes.

The patients have been selected through an appropriate oncologic genetic counseling according to the Hereditary Breast Cancer Protocol of the Emilia-Romagna region [32]. During the genetic counseling, the personal and family history of cancer was collected and verified by our medical geneticists. According to the FONCaM guidelines used in the protocol [33], a diagnosis of MBC at any age is sufficient to proceed with the BRCA1/2 genetic test, regardless of family history of breast and ovarian cancers (BC/OC). Through this procedure, we selected 70 Italian patients with a diagnosis of MBC.

We used 50 ng of DNA from each sample to create libraries following the Trusight Rapid Capture protocol (Illumina, San Diego, CA, USA). Libraries were enriched for the regions of interest with the Trusight Cancer panel (Illumina), which contains probes targeting the coding regions of 94 genes involved in hereditary cancer (Table 1).
Libraries were sequenced on the MiSeq platform (Illumina) with MiSeq Reagent Kit v2 configured 2 × 150 cycles, according to the manufacturer’s instructions.
All deleterious variants (classes 4–5) identified in BRCA1/2 genes were confirmed through Sanger sequencing following a custom protocol previously described [15]. The same procedure was performed for the BRCA1/2 coding regions with a coverage < 50×. The deleterious variants identified in other genes were confirmed through a second NGS analysis with the same kit and protocol.

The bioinformatics analysis of NGS results was performed with a customized pipeline described in our previous studies [15,34]. The fastq files have been aligned with BWA software [35] to the reference genome, version UCSC-Build37/hg19. Reads were remapped against the Trusight Cancer Panel reference, removed from duplicates and then realigned for germline indels using GATK indelRealigner. Finally, variants were called using Unified Genotyper of GATK software, version 3.2.2 [36]. Genomic and functional annotations of detected variants were made by Annovar [37].

The presence of large deletions/duplications of BRCA1/2 genes, not detectable with the Trusight protocol, was assessed by Multiplex Ligation-dependent Probe Amplification (MLPA) technique with the P002-BRCA1 and P045-BRCA2/CHEK2 kits (MRC Holland, Amsterdam, The Netherlands). The large BRCA1 deletion identified by MLPA was confirmed through the P087-BRCA1 confirmation kit (MRC Holland). Coffalyser software (MRC Holland) was used for the quantitative analysis of the electropherograms.

All the genetic variants identified were divided into five classes according to the International Agency for Research on Cancer (IARC) [38]: Benign Variant (BV-class 1), Likely-Benign Variant (LBV-class 2), Variant of Uncertain Significance (VUS-class 3), Likely-Pathogenic Variant (LPV-class 4) and Pathogenic Variant (PV-class 5). The process of variant classification was performed in accordance with the guidelines of the American College of Medical Genetics (ACMG) [39].
In particular, for BRCA1/2 variants, we used different BRCA-specific databases [40,41,42,43,44,45]. The variants of other genes were classified using comprehensive variant databases [46,47,48].

Since BRCA1 and BRCA2 variants are the most common alterations in BC patients, we initially focused on these genes.
The NGS analysis allowed us to detect eight pathogenic variants (PVs) in BRCA1/2 genes. In particular, we identified the c.4964_4982del and the c.5266dupC variants in BRCA1 gene, both already reported [46] and classified as pathogenic [47]. In BRCA2 gene, we identified five PVs in six patients, c.1238delT, c.1813delA, c.3195_3198delTAAT, c.5073dupA in single patients and c.6039delA in two unrelated patients. In addition, these variants were already reported [46] and classified as pathogenic [47].
The MLPA analysis revealed an additional PV in BRCA1 gene, a large deletion covering exons 1 and 2. However, the MLPA technique does not give information about the exact location of the breakpoints and, consequently, the variant has been classified as c.-113-?_80+?del. This variant is not reported in the databases, but the deletion of the transcription start site and the first two exons certainly has a deleterious effect on the gene transcription. Moreover, large deletions involving these two exons have been previously described as pathogenic in BC/OC patients [50,51,52,53,54,55,56,57].
Overall, we identified 9/70 patients (12.9%) with BRCA1/2 PVs (Figure 1). All the BRCA1/2 PVs identified in our cohort are reported in Figure 2 and Table 2 with the corresponding patient characteristics. In particular, 8/9 patients had an IDC and 1/9 had a DCIS. The average age at MBC onset was 62.5 years. Regarding the family history of cancer, 5/9 patients (55.6%) had I- and/or II-degree relatives with BC/OC and 3/9 patients (33.3%) had I- and/or II-degree relatives with other cancers.

3.3. Pathogenic and Likely-Pathogenic Variants in other Genes

After the assessment of the BRCA1/2 mutation status of our patients, we searched for PVs and likely-pathogenic variants (LPVs) in the other 92 genes of the panel. We detected six additional PVs/LPVs of six different genes in 6/70 patients (8.6%) (Figure 1). In particular, we identified the c.8319_8323dupTGTCC variant in ATM gene, the c.1110_1116delCATGCAG variant in BAP1 gene, the c.1100delC variant in CHEK2 gene, the c.3538_3541delGAAG in the EGFR gene, the c.73A>T variant in PALB2 gene and the c.181_182delCT in RAD51C gene. The variants in ATM, CHEK2, PALB2 and RAD51C genes were already reported [46] and classified as pathogenic [47]. On the opposite, the variant in EGFR gene was reported only in dbSNP without classification [46] and the variant in BAP1 gene was novel. According to the guidelines [39], we classified these two alterations as LPVs.
All the PVs/LPVs identified in genes other than BRCA1/2 are reported in Table 3 with the corresponding patient characteristics. In particular, 5/6 patients had an IDC and 1/6 had a DCIS. The average age at MBC onset was 55.8 years. Regarding the family history of cancer, 2/6 patients (33.3%) had I- and/or II-degree relatives with BC/OC and 2/6 patients (33.3%) had I- and/or II-degree relatives with other cancers.

3.4. Patients without Pathogenic and Likely-Pathogenic Variants

Overall, our results confirmed the high risk of BC also for male carriers of BRCA1/2 germline alterations, reinforced the emerging link between MBC and other genes involved in the predisposition to BC, and highlighted the association of novel genes with MBC.

We are grateful to all the patients enrolled in this study for providing information about their personal and family history. We would like also to thank Rosa Vattiato of the Romagna Cancer Registry for the collection of clinical information of patients. 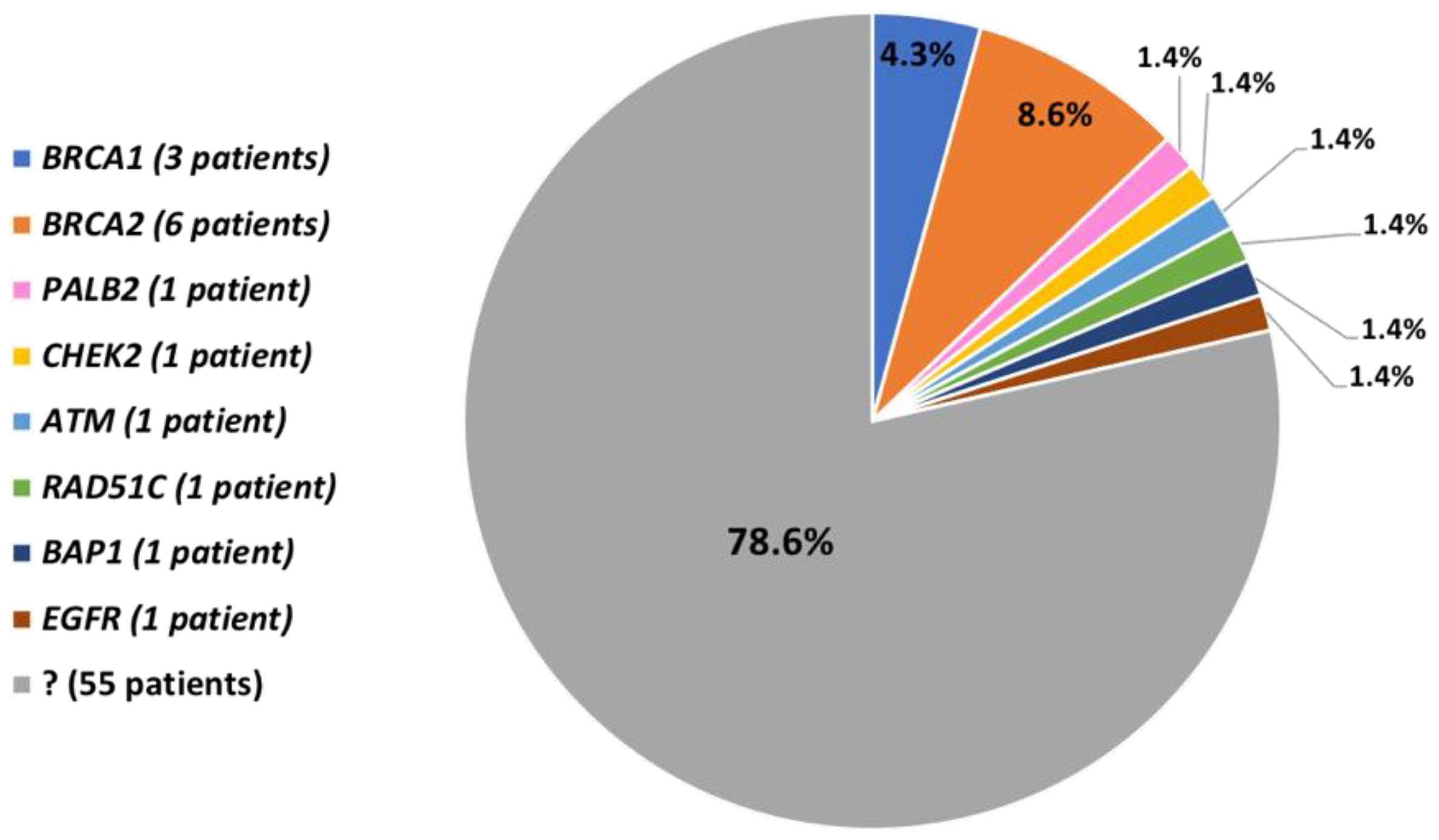