What Does “the RNA World” Mean to “the Origin of Life”?
Previous Article in Special Issue

Effects of Trimetaphosphate on Abiotic Formation and Hydrolysis of Peptides

The primordial Earth probably had most of the factors needed for the emergence and development of life. It is believed that it had not only water, but also simple inorganic and organic materials. While studies since the 1950s on the origins of organic matter have established key roles for amino acids, conditions that would have promoted their condensation to make polymers, such as peptides or proteins, have yet to be fully defined. The condensation of amino acids in a water-rich environment is not thermodynamically favored. Therefore, the efficient formation of peptides requires the presence of a catalyst or the activation of a substrate. In living cells, the biosynthesis of proteins is assisted by enzymes and requires adenosine triphosphate (ATP), a relatively complex organic polyphosphate, which serves as an energy source. Outside the living organism, simpler inorganic polyphosphates can form active aminoacyl–phosphate anhydrides, which suggests the broader potential of phosphorus for enabling the polymerization of amino acids. However, this has yet to be demonstrated. To address this gap, aqueous solutions containing a simple dipeptide, diglycine, and a simple polyphosphate, trimetaphosphate, were dried, and reaction products were analyzed by high performance liquid chromatography and mass spectrometry (HPLC-MS). Different reaction environments, which were defined by the initial solution composition, pH, temperature, and incubation time, were found to affect the distribution and yield of products. Our results collectively provide strong evidence for reactions that both condense and hydrolyze peptides. It is noteworthy that the co-occurrence of reactions that form and cleave peptides are a central feature of Kauffman’s theory for the emergence of autocatalytic sets, which is a key step in the chemical origins of life.
Keywords: diglycine; drying; condensation; emergence; activation; N-phosphorylation; environment; HPLC; mass spectrometry diglycine; drying; condensation; emergence; activation; N-phosphorylation; environment; HPLC; mass spectrometry

Phosphorus is an essential element of life, and presumably played a critical role in its origins. One hypothesis on the origins of phosphorus on Earth is that it was delivered, together with other inorganic and organic matter, by asteroids or meteorites [1,2]. It has been suggested that at the very early stages, phosphorus (III) served as a precursor for the formation of organophosphorus compounds [3,4]. As the young Earth cooled, phosphorus (III) might have been present as a phosphite species (HPO32−), which has been identified on marine sediments of the Archean era [5]. In turn, phosphite ions might have been generated by oxidation from phosphides [6], which have been found in the form of various minerals in accessory phases in meteorites, lunar rocks, interplanetary dust particles, and comets [7]. Under current geochemical conditions, phosphorus exists mostly in a pentavalent state as orthophosphate ion (PO43−). To consider what role phosphorus could have played in prebiotic peptide formation, it is useful to briefly review its current role in the highly evolved process of protein synthesis.
In vivo protein synthesis involves the O-phosphorylation of the C-termini of amino acids, converting them to energy-rich amino acyl adenylates (Figure 1). Such activation of amino acids requires the enzyme aminoacyl tRNA synthetase, as well as adenosine triphosphate (ATP), a relatively complex organic polyphosphate. Mechanisms for the synthesis of ATP on the primitive Earth are an active topic of current debate [8]. In the absence of enzymes and ATP, amino acids can be activated using simpler, more elemental condensing agents, such as inorganic polyphosphates [9]. Such activation typically proceeds at the amino termini, where N-phosphorylation can release more free energy than the O-phosphorylation of catalyzed protein synthesis [10]. In nature, N-phosphoryl amino acids might represent a “living fossil” of prebiotic chemistries that have persisted; they are likely intermediates for many highly evolved enzymatic processes [11,12]. On the primitive Earth, inorganic polyphosphates such as trimetaphosphate might have served as a source of free energy. Trimetaphosphate (P3) could have been made directly from an acidic phosphate as a byproduct of volcanic processing [3,13]. More recently, the structural characterization of N-phosphoryl amino acids and the formation of the P–N bond have been elucidated by NMR [14] and IR [15] analysis, which have provided significant insight into the reaction mechanism [16]. Despite quite extensive studies on the activation of amino acids by polyphosphates, little effort has been devoted to study the subsequent dehydration (or condensation) reactions resulting in polypeptide formation.
Here, we tested the ability of trimetaphosphate (P3), a simple inorganic polyphosphate, to promote the synthesis of polypeptides during drying–heating processes from aqueous solutions at different temperatures and pH. Diglycine was selected as a reaction substrate because its α-carbon contributes minimal effects of steric and side-group chemistry. Further, the susceptibility of its single peptide bond to hydrolysis might be readily detected from the distribution of reaction products. Our studies indicate strong correlations between environmental conditions for peptide bond formation, its cleavage, and the final composition of the reaction mixture. We also demonstrate the stabilizing effect of polyphosphate against hydrolysis on the peptide bond, a characteristic that might have been important during prebiotic protein evolution.

All used chemicals were of analytical grade purity, purchased from Sigma Aldrich Chemical Company (St. Louis, MO, USA), and used without further purification. Reactions were carried out in 1.5 mL low-retention Eppendorf tubes. A standard modular heater with temperature control was used as a heat source (VWR).

2.2. General Procedure for Drying-Induced Condensation of Diglycine in the Presence of Base

A sample analysis was run using a Shimadzu Nexera XR IP-HPLC system fitted with a reversed-phase C18 column (Phenomenex Aeris XB-C18, 150 mm × 4.6 mm, 3.6 μL, Phenomenex Torrance, CA, USA). Samples were auto-injected in 10 μL aliquots (Shimadzu Nexera X2 Autosampler, Schimadzu Nakagyo-ku, Kyoto, Japan), and analysis was done in isocratic mode with a flow rate of 1 mL/min. The mobile phase was 50 mM KH2PO4 and 7.5 mM of C6H13SO3Na solution adjusted to pH 2.5 with H3PO4. The oligomeric products were detected at 195 nm, and the retention times were confirmed by comparison with pre-made standards containing glycine monomer and its oligomers.

The concentration of oligomer products was determined by the integration of absorbance values (195 nm) and calibration with commercially available standards (r2 ≥ 0.999).

A typical reaction mixture consisted of 200 mM diglycine solution and sodium trimetaphosphate adjusted to pH ~ 9.5 with NaOH. The mixture was left open to the atmosphere while maintained at constant temperature for a specific time. Ambient humidity levels were not controlled during the course of the experiment. The resulting dry pellet was then redissolved in ultrapure water (18.2 Ω), and the mixture was analyzed by ion pair high-performance liquid chromatography (IP-HPLC). Analysis of the products after rehydration revealed several peaks, indicating the formation of different oligomers under different conditions (Figure 2). The identity of detected compounds was confirmed by comparison of their retention times with commercially available standards as well as mass spectrometric analysis.
First, we tested the influence of temperature and incubation time on polymerization rates. Various aqueous solutions of diglycine were incubated at 70 °C, 80 °C, and 95 °C, and open to the atmosphere for 24 h and 48 h to allow evaporation and dry-state reactions. HPLC analysis of redissolved solids showed that the conversion of diglycine into longer peptides increases both with higher temperatures and longer incubation time (Figure 3), which is in agreement with previous observations made by Borsook [17,18] on activated amino acids. In addition, we observed that the highest rates of substrate conversion into longer oligomers under mild temperatures (70 °C and 80 °C) were achieved from alkalized solutions of trimetaphosphate. When the reaction was carried out at elevated temperatures of 95 °C, the highest conversion of substrate (close to 50%) was observed in the mixtures of alkalized diglycine.
Next, the ability of diglycine to polymerize was tested from the mixture consisting of the dimer and triphosphate in neutral solution (pH ~ 6.5), followed by the control reaction, which was an alkalized solution of the dipeptide. Here, HPLC profiles of analyzed mixtures revealed notably different results. When the alkalized solution of pH 9.5 permitted peptide hydrolysis, as reflected by the presence of the odd-numbered species Glyn, where n = 3, 5, 7, etc. (Figure 2 Curve B), the neutral reaction of diglycine with P3 yielded only even-numbered oligomers, indicating a suppression of amide bond cleavage (Figure 2 Curve A) by a stabilizing effect of the polyphosphate. 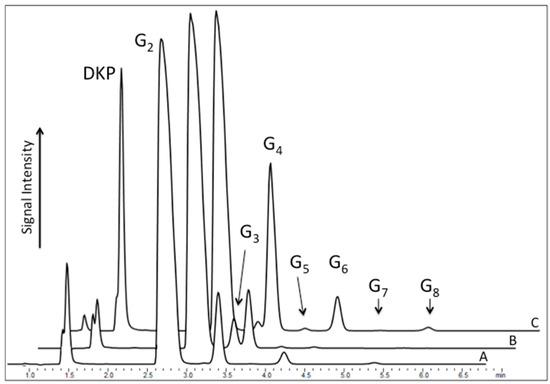 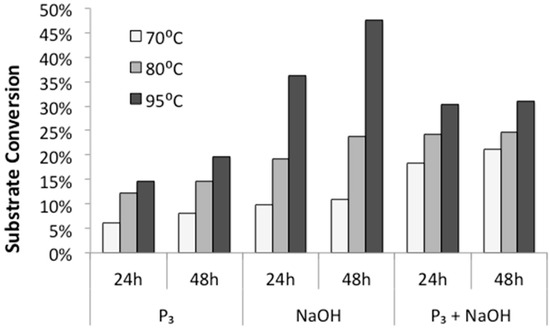 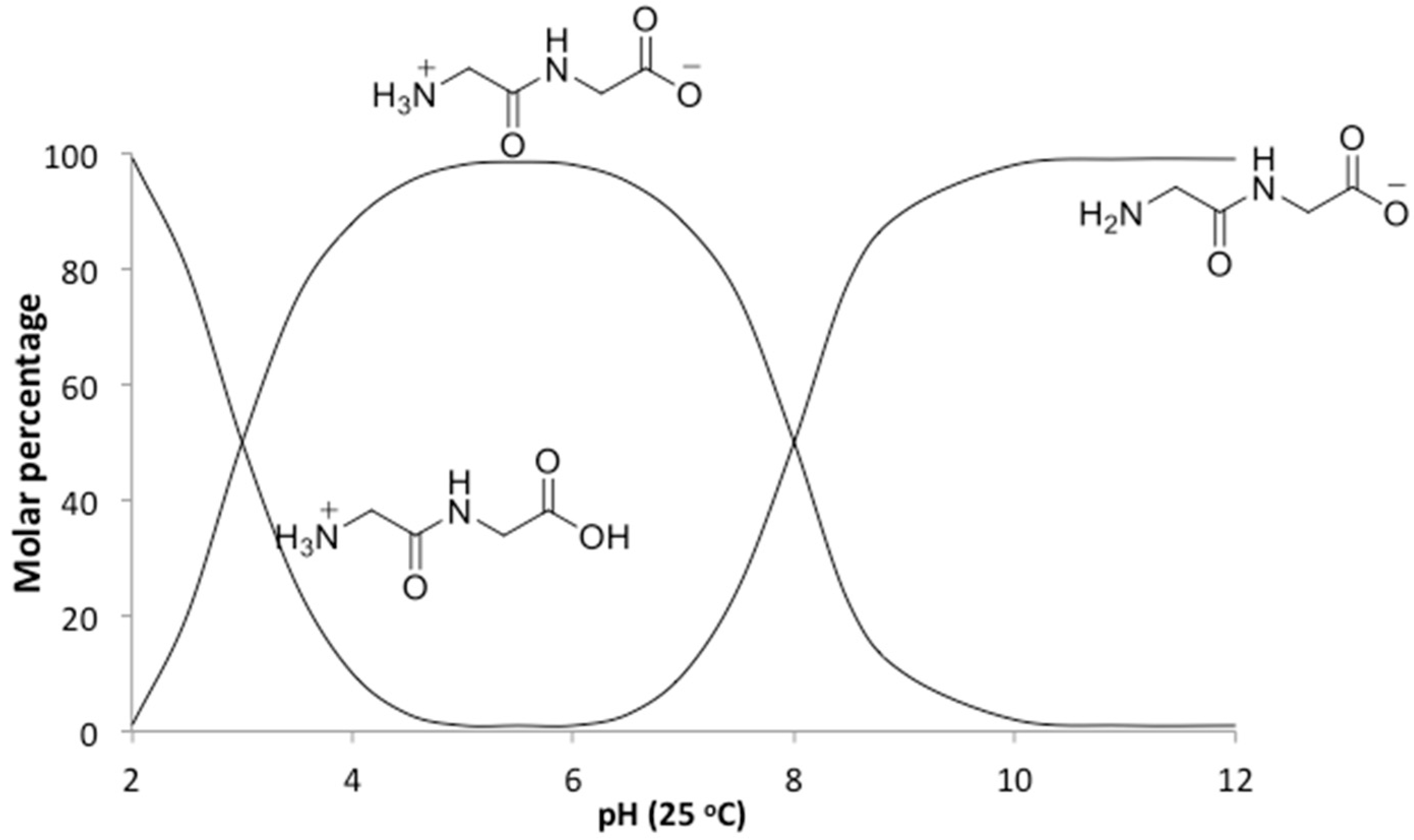