What Does “the RNA World” Mean to “the Origin of Life”?
Previous Article in Special Issue

Effects of Trimetaphosphate on Abiotic Formation and Hydrolysis of Peptides

The primordial Earth probably had most of the factors needed for the emergence and development of life. It is believed that it had not only water, but also simple inorganic and organic materials. While studies since the 1950s on the origins of organic matter have established key roles for amino acids, conditions that would have promoted their condensation to make polymers, such as peptides or proteins, have yet to be fully defined. The condensation of amino acids in a water-rich environment is not thermodynamically favored. Therefore, the efficient formation of peptides requires the presence of a catalyst or the activation of a substrate. In living cells, the biosynthesis of proteins is assisted by enzymes and requires adenosine triphosphate (ATP), a relatively complex organic polyphosphate, which serves as an energy source. Outside the living organism, simpler inorganic polyphosphates can form active aminoacyl–phosphate anhydrides, which suggests the broader potential of phosphorus for enabling the polymerization of amino acids. However, this has yet to be demonstrated. To address this gap, aqueous solutions containing a simple dipeptide, diglycine, and a simple polyphosphate, trimetaphosphate, were dried, and reaction products were analyzed by high performance liquid chromatography and mass spectrometry (HPLC-MS). Different reaction environments, which were defined by the initial solution composition, pH, temperature, and incubation time, were found to affect the distribution and yield of products. Our results collectively provide strong evidence for reactions that both condense and hydrolyze peptides. It is noteworthy that the co-occurrence of reactions that form and cleave peptides are a central feature of Kauffman’s theory for the emergence of autocatalytic sets, which is a key step in the chemical origins of life. View Full-Text
Keywords: diglycine; drying; condensation; emergence; activation; N-phosphorylation; environment; HPLC; mass spectrometry diglycine; drying; condensation; emergence; activation; N-phosphorylation; environment; HPLC; mass spectrometry
►▼ Show Figures 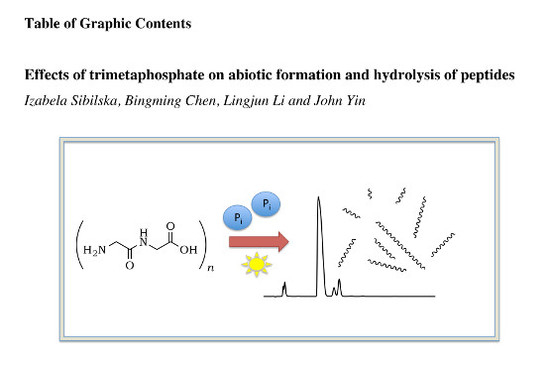