Mechanism of Glucose Water as a Neural Injection: A Perspective on Neuroinflammation

:
The entrapment of peripheral nerves is associated with chronic neuroinflammation and neuropathic pain, and perineural injection therapy with glucose is emerging as an effective treatment for peripheral entrapment neuropathy. However, the mechanism underlying the pharmacological effect of glucose on nerves remains unclear. One of the hypothesized mechanisms is that glucose reduces neurogenic inflammation. Therefore, we investigated the effects of high glucose concentrations on cytokine-induced neuroinflammation in vitro. Human SH-SY5Y neuronal cells were challenged with 10 ng/mL TNF-α for 16 h and subsequently treated with different glucose concentrations (0–25 mM) for 24 h. Cell viability was evaluated using the diphenyltetrazolium bromide assay, and proinflammatory cytokine levels were assessed using ELISA and quantitative PCR. In addition, mRNA levels of NF-κB and cyclooxygenase-2 were analyzed using quantitative PCR. Exposure to 10 ng/mL TNF-α resulted in decreased viability of SH-SY5Y cells and significant upregulation of IL-6, IL-1β, NF-κB, and cyclooxygenase-2. Subsequent exposure to high glucose levels (25 mM) markedly reduced the upregulation of IL-6, IL-1β, cyclooxygenase-2, and NF-κB, and restored the functional metabolism of SH-SY5Y cells, compared with that of the normal glucose control. Our findings suggest that high glucose concentrations can mitigate TNF-α-induced NF-κB activation, upregulation of proinflammatory cytokines, and metabolic dysfunction.
Keywords:
glucose; neuroinflammation; cytokine; nerve

The entrapment of peripheral nerves results in the interruption of nerve microcirculation, ischemia, impaired nerve conduction, and alteration of nerve dynamics due to nerve adhesion and inflammation, which sequentially causes numbness, paresthesia, neuropathic pain, or muscle atrophy and weakness [1,2]. On a worldwide basis, disabling upper and lower extremity entrapment syndromes are particularly common, with carpal tunnel syndrome (CTS) and cubital tunnel syndromes having annual incidence rates of 276/100,000 [3] and 25/100,000 [4] cases, respectively. Palpation-guided subcutaneous perineural injection therapy, which involves the injection of glucose water to reduce neuropathic pain, was first reported by John Lyftogt in 2007 [5]. Over the next decade, this technique was modified by Lam et al. [6,7,8,9] and Wu et al. [10] to incorporate ultrasound guidance to hydrodissect peripheral nerves to treat entrapment neuropathy and neuropathic pain [11]. Technique improvements have been followed by a rapid expansion of the supportive literature concerning hydrodissection with 5% glucose water, including multiple level I–II randomized controlled trials [10,12,13,14,15,16]. This neural intervention is now listed as one of the treatment options by UpToDate [17] and the 20th edition of Harrison’s Principles of Internal Medicine for CTS [18]. A recent review also provides insight into the use of hydrodissection with 5% glucose water, including preliminary evidence for its benefit in the treatment of other peripheral entrapment neuropathies [19]. As chronic pain and compression neuropathy treatment with therapeutic glucose injections is an increasingly common area of high-level clinical research, it is important to search for a basic science mechanism. Recent basic science studies on the physiological effects of glucose injections have revealed potential benefits from glucose intravesical injections in an in vivo murine model of interstitial cystitis in the form of altered behavior and bladder wall regeneration [20], in vitro evidence for glucose stimulation of cartilage deposition by chondrogenic cells [21], and upregulation of favorable cytokines in an in vivo study on changes in human knee osteoarthritis, which demonstrated a significant association between hypertonic glucose treatment for osteoarthritis and upregulation of MMP2, TIMP-1, EGF, CXCL9, and IL-22 [22].
The mechanism of hydrodissection with 5% glucose water for peripheral entrapment neuropathy can be divided into mechanical and pharmacological effects. Detaching the nerve by a non-specific effect of fluid under force may progressively lessen adhesions, increase blood flow, and remobilize the nerve for neuroregeneration [6,7,11,23,24]. However, understanding the superior effects of glucose as an injectate for hydrodissection requires further understanding of its pharmacological mechanism, which is the focus of our study. Several researchers have proposed that glucose elevation, via a potential sensorineural mechanism, stabilizes neural activity or decreases neurogenic inflammation, thereby reducing neuropathic pain. When the nerve is in a hypoglycemic environment, histopathological changes result in peripheral nerves, along with the activation of nociceptive C-fibers, with increased noxious signal transduction [25,26]. If glucose is added, the excessive activation of nociceptive C-fiber nerves quickly returns to normal [25]. Moreover, elevated extracellular glucose concentrations can hyperpolarize C-fibers to stabilize their activation [27]. Although some cell lines, such as human chondrocytes or monocytes, react adversely to high glucose levels (25 mM) by expressing proinflammatory cytokines and become increasingly dysfunctional [28,29], neurons and neuronal stem cells appear to tolerate and even require higher glucose levels, up to 40 mM [30,31,32,33,34], and react much more adversely to low glucose than low oxygen concentrations [35]. In this study, we explored the effects of glucose on human SH-SY5Y neuroblastoma cells in the presence of a proinflammatory mediator, tumor necrosis factor-alpha (TNF-α), which correlates with neuropathic pain in constrictive neuropathy [36]. We hypothesized that glucose would exert an anti-inflammatory effect by reducing TNF-α-induced inflammatory mediator levels in vitro.

Human SH-SY5Y neuroblastoma cells (CRL-2266, American Type Culture Collection ATCC, Manassas, VA, USA), a commonly studied neuronal cell type, are widely used for in vitro studies of many neurological disorders, including neuroinflammatory and neurotoxicity models, because SH-SY5Y cells have similar characteristics to nerve cells [37,38,39]. SH-SY5Y cells were grown in Dulbecco’s modified Eagle medium (DMEM)/F12 Hams with 17.5 mM glucose and supplemented with 2 mM L-glutamine, 100 U/mL penicillin, 100 μg/mL streptomycin (Life Technologies Inc., Carlsbad, CA, USA), and 10% (v/v) fetal bovine serum (Invitrogen, Waltham, MA, USA). Cells were incubated at 37 °C in a humidified atmosphere containing 5% CO2 and 95% air. The culture medium was changed every 2–3 days.
The first part of the study evaluated the effect of glucose on the absence of TNF-α in the viability of SH-SY5Y cells. Cells that had been maintained in DMEM/F12 Hams with 17.5 mM glucose were washed and harvested for exposure to DMEM/F12 Hams medium with varying glucose concentrations (0–25 mM) (Figure 1A).
The second part of the study evaluated the effect of glucose in the presence of TNF-α on cellular metabolic activity and the levels of IL-1β, IL-6, nuclear factor kappa B (NF-κB), and cyclooxygenase type 2 (COX-2). SH-SY5Y cells were first challenged with TNF-α (10 ng/mL) to mimic the inflammatory environment, as in a previous study [40]. Three data points were available for each evaluated item (Figure 1B):

A diphenyltetrazolium bromide (MTT) assay was performed to determine the cell viability, as measured by the metabolic activity of cells. A total of 1 × 104 cells were seeded in each well of a 96-well plate and cultured overnight before treatment. After treatment, the culture medium was aspirated, and 0.5 mg/mL MTT solution (Sigma-Aldrich, Saint Louis, MO, USA) was added to each well before incubation for 3 h at 37 °C. The supernatant was aspirated, and dimethyl sulfoxide (Sigma-Aldrich) was added to release and form acriflavine. The resulting absorbance was measured at 540 nm using the EMax® (Endpoint ELISA Microplate Reader; Molecular Devices Inc., San Jose, CA, USA).

Cell culture media were collected and centrifuged at 13,500× g for 10 min at 4 °C, and the resulting supernatants were stored at −80 °C for subsequent analyses. The levels of IL-1β and IL-6 in the culture medium were measured using an enzyme-linked immunosorbent assay (ELISA) kit (R&D Systems Inc., Minneapolis, MN, USA).

3.1. Effects of Glucose on the Metabolic Activity of SH-SY5Y Cells

Neuronal SH-SY5Y cells were treated with glucose concentrations of 0–25 mM in the presence or absence of TNF-α for 24 h, and cell viability was examined using the MTT assay (Figure 2). The results suggest that 25 mM glucose is optimal for cellular growth, given the trend toward a progressive increase in viability as the mM glucose concentration increases, although these values did not attain between-group significance (Figure 2A). Exposure to TNF-α (10 ng/mL) resulted in the loss of metabolic activity. Metabolic failure (cessation) was reversed progressively in the presence of glucose and normalized with 25 mM glucose (p < 0.05) (Figure 2B).

The mRNA level of NF-κB p65 was upregulated in SH-SY5Y cells in response to TNF-α treatment (Figure 4A). The expression of COX-2 was significantly increased in SH-SY5Y cells by TNF-α treatment (Figure 4B). The results show that 25 mM glucose suppressed the elevated expression of NF-κB and COX-2 (p < 0.05), whereas no significant difference was found at lower glucose levels (Figure 4A,B).

The authors are grateful to Jenifert Hsu, who contributed to the technical assistant and enabled the completion of this study. 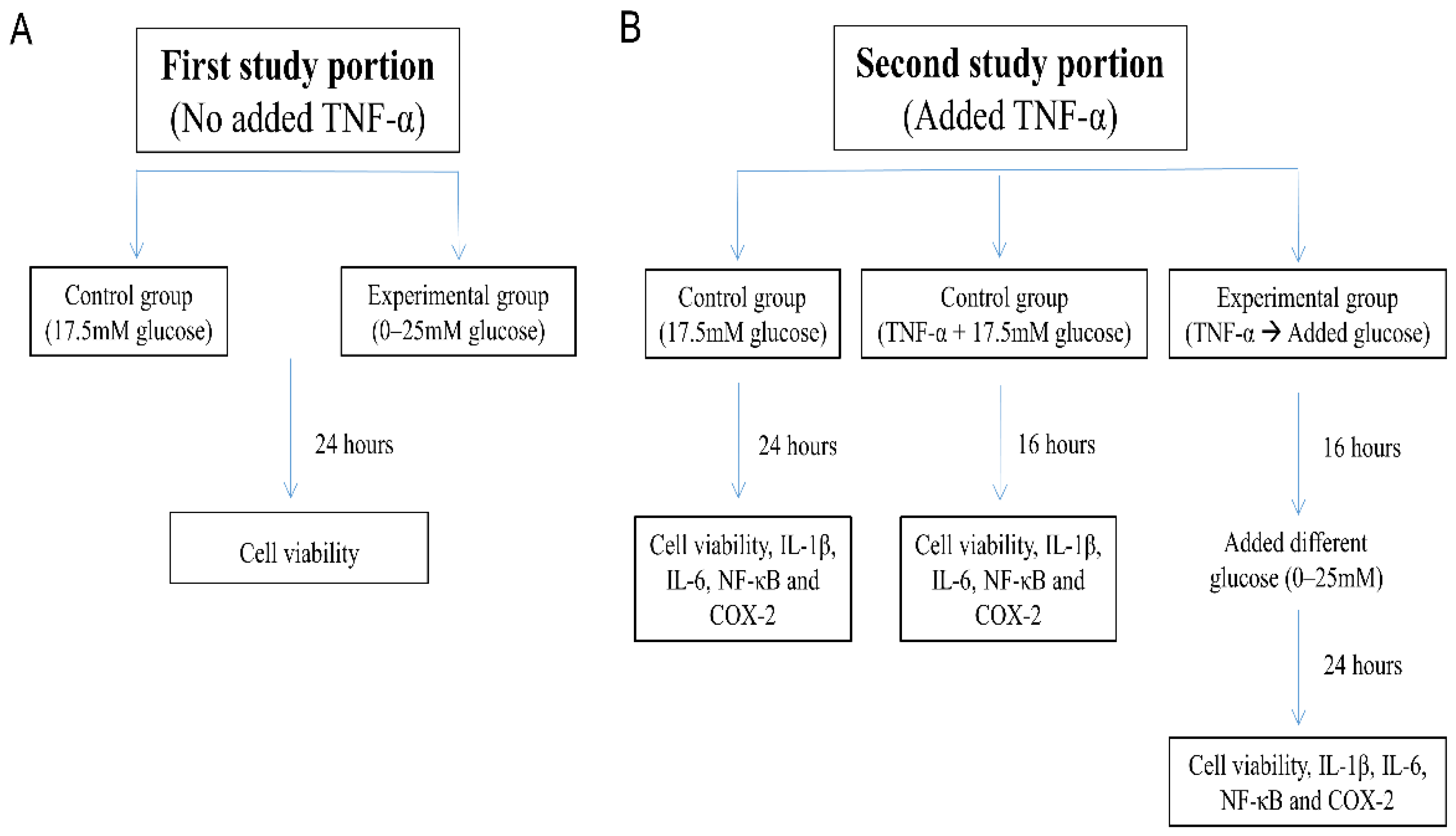