Hyperalphalipoproteinemia and Beyond: The Role of HDL in Cardiovascular Diseases
Next Article in Special Issue

Photobiomodulation Therapy as a Possible New Approach in COVID-19: A Systematic Review

:
COVID-19 is a viral disease characterized as a pandemic by the World Health Organization in March 2020. Since then, researchers from all over the world have been looking for ways to fight this disease. Many cases of complications arise from insufficient immune responses due to low immunity, with intense release of pro-inflammatory cytokines that can damage the structure of organs such as the lung. Thus, the hypothesis arises that photobiomodulation therapy (PBMT) with the use of a low-level laser (LLLT) may be an ally approach to patients with COVID-19 since it is effective for increasing immunity, helping tissue repair, and reducing pro-inflammatory cytokines. This systematic review was performed with the use of PubMed/MEDLINE, Web of Science, Scopus and Google Scholar databases with the following keywords: “low-level laser therapy OR photobiomodulation therapy AND COVID-19”. The inclusion criteria were complete articles published from January 2020 to January 2021 in English. The exclusion criteria were other languages, editorials, reviews, brief communications, letters to the editor, comments, conference abstracts, and articles that did not provide the full text. The bibliographic search found 18 articles in the Pubmed/MEDLINE database, 118 articles on the Web of Science, 23 articles on Scopus, and 853 articles on Google Scholar. Ten articles were included for qualitative synthesis, of which four commentary articles discussed the pathogenesis and the effect of PBMT in COVID-19. Two in vitro and lab experiments showed the effect of PBMT on prevention of thrombosis and positive results in wound healing during viral infection, using the intravascular irradiation (ILIB) associated with Phthalomethyl D. Two case reports showed PBMT improved the respiratory indexes, radiological findings, and inflammatory markers in severe COVID-19 patients. One case series reported the clinical improvement after PBMT on 14 acute COVID-19 patients, rehabilitation on 24 patients, and as a preventive treatment on 70 people. One clinical trial of 30 patients with severe COVID-19 who require invasive mechanical ventilation, showed PBMT-static magnetic field was not statistically different from placebo for the length of stay in the Intensive Care Unit, but improved diaphragm muscle function and ventilation and decreased the inflammatory markers. This review suggests that PBMT may have a positive role in treatment of COVID-19. Still, the necessity for more clinical trials remains in this field and there is not sufficient research evidence regarding the effects of PBMT and COVID-19 disease, and there is a large gap.
Keywords:
COVID-19; SARS-CoV-2 infection; immunity; inflammation; low-level laser therapy; photobiomodulation therapy; systematic review

COVID-19 (SARS-CoV-2) is a viral disease discovered in December 2019, in the Chinese city of Wuhan, and spread to several continents, which led the World Health Organization (WHO) to characterize the disease as a pandemic 11 March 2020 [1]. This fact demonstrates the considerable speed of propagating this infectious pathogen, spreading around the world in a few months because on average, one infected person spreads the infection to three other people [2]. The forms of contamination are varied, such as through droplets of saliva, contaminated objects and surfaces, coughing, and sneezing. Thus, social distance and hygiene measures are essential to reduce contamination by the virus, with social isolation being the most effective method [3,4].
The most common symptoms of COVID-19 are cough, fever, anosmia, ageusia, difficulty breathing, and in more severe cases, pneumonia. Some conditions, such as diabetics, cardiac and hypertensive individuals, are more susceptible to presenting more severe conditions. This is also observed in people with low immunity since immunity is a great ally to the fight against coronavirus in the human body [5,6].
However, although high immunity is a good ally, its low levels can intensify the inflammation process. In the case of a defective immune response against COVID-19, an accumulation of immune cells in the lungs can occur, causing an exacerbated production of pro-inflammatory cytokines, which can damage the lung structure. With this excess of cytokines, it can spread to other locations, causing damage to multiple organs. In a healthy immune response, virus-specific T cells target inflammation and eliminate infected cells, preventing the virus from spreading, leading to minimal damage. Thus, stimulation of immunity is critical to approach the new coronavirus [7].
There are several ways to increase immunity that can be conducted by practicing physical activity and having good eating habits, which have been shown to affect immune sensitivity and inflammation [8]. There is also the possibility of using Vitamin D and Zinc in capsules, which in the body have beneficial immunomodulatory and anti-inflammatory effects in infections caused by viruses. Still, in the context of COVID-19, there is no scientific evidence to prove the effectiveness of these elements [9].
Another way of modulating the immune system is the use of photobiomodulation therapy (PBMT), which can stimulate immune cells to clump together at the site of the affected cells and assist them in survival through greater anti-inflammatory cytokine expression and decreased pro-inflammatory. In precursor studies, it was observed that laser light in low doses accelerated the healing of excisional wounds, called laser biostimulation [10]. There was a clear lack of consensus on the terminology for this therapy. The term most often used is low-level laser therapy (LLLT). ‘‘Laser’’ is not the most appropriate term as other light devices such as LEDs are currently used for this application. The ideal term and its definition must be precise and emphasize its scientific basis, with photobiomodulation being the term of choice to describe this use, meaning light therapy that uses non-ionizing forms of sources including lasers, LEDs, and broadband light in the spectrums visible and infrared [11].
The effect of PBMT is due to its absorption by tissues through photoreceptors, facilitating events such as mitochondrial respiration, calcium transport—which results in more significant cell proliferation—repairing, and regenerating tissues [12,13,14,15]. PBMT has to assist in the recovery process from nerve [16,17,18], bone [19,20,21], respiratory tract [22,23,24,25], and other injuries involved in functional rehabilitation, favoring the patient’s recovery. LLLT can be used with the ILIB technique (Intravascular Laser Irradiation of Blood), which increases immunity, inducing positive effects on the expression of immunoglobulins (IgA, IgM and IgG) and modulation of inflammation. Therefore, this technique can be used to treat various pathogens such as infectious diseases, bronchitis, and pneumonia [26].
Given the great importance of biological mechanisms for the prevention, treatment, and rehabilitation of diseases such as COVID-19, the aim of this systematic review was to analyze the use of PBMT as a possible new approach as a complementary therapy in the treatment of patients affected by COVID-19.

Four databases were searched, PubMed/MEDLINE, Web of Science, Scopus, and Google Scholar, using the following as keywords: “low-level laser therapy OR photobiomodulation therapy AND COVID-19”. The collection of articles was carried out considering the period of publication from January 2020 to 31 January 2021, by two evaluators previously used to the evaluation of the criteria to avoid bias in the selection.

The studies that presented titles and abstracts related to the theme of the initial research were verified, using the variables low-level laser therapy or photobiomodulation therapy and their use in the pandemic resulting from the new coronavirus SARS-CoV-2 (COVID-19). The next step was to evaluate the full text of the articles previously selected by the abstract. The methodology, results, and relevance were considered for listing the choice of articles.
For inclusion in the research, the articles were necessarily accessed in their full content. Analysis and synthesis of reflective and consistent texts on the subject were carried out.
The phases of the bibliographic search were organized by the Prisma Flow Diagram [27] (Figure 1).

The use of photobiomodulation therapy, through the low-level laser, in the initial stage of COVID-19, which can evolve to more severe stages, has been shown to be beneficial in treating the disease complications. Clinical trials and studies with a larger sample population are needed to confirm this approach, both in terms of prevention and treatment assistance. Photobiomodulation is promising as an approach to COVID-19 because previous studies show its effectiveness, mainly in reducing inflammation levels, which may favor the control of the exacerbated reaction caused by SARS-CoV-2, mainly in the lungs.

The authors would like to acknowledge the National Council for Scientific and Technological Development (B.T.L.d.M. scholarship holder from PIBIC/CNPq/2020/2021—Brazil). 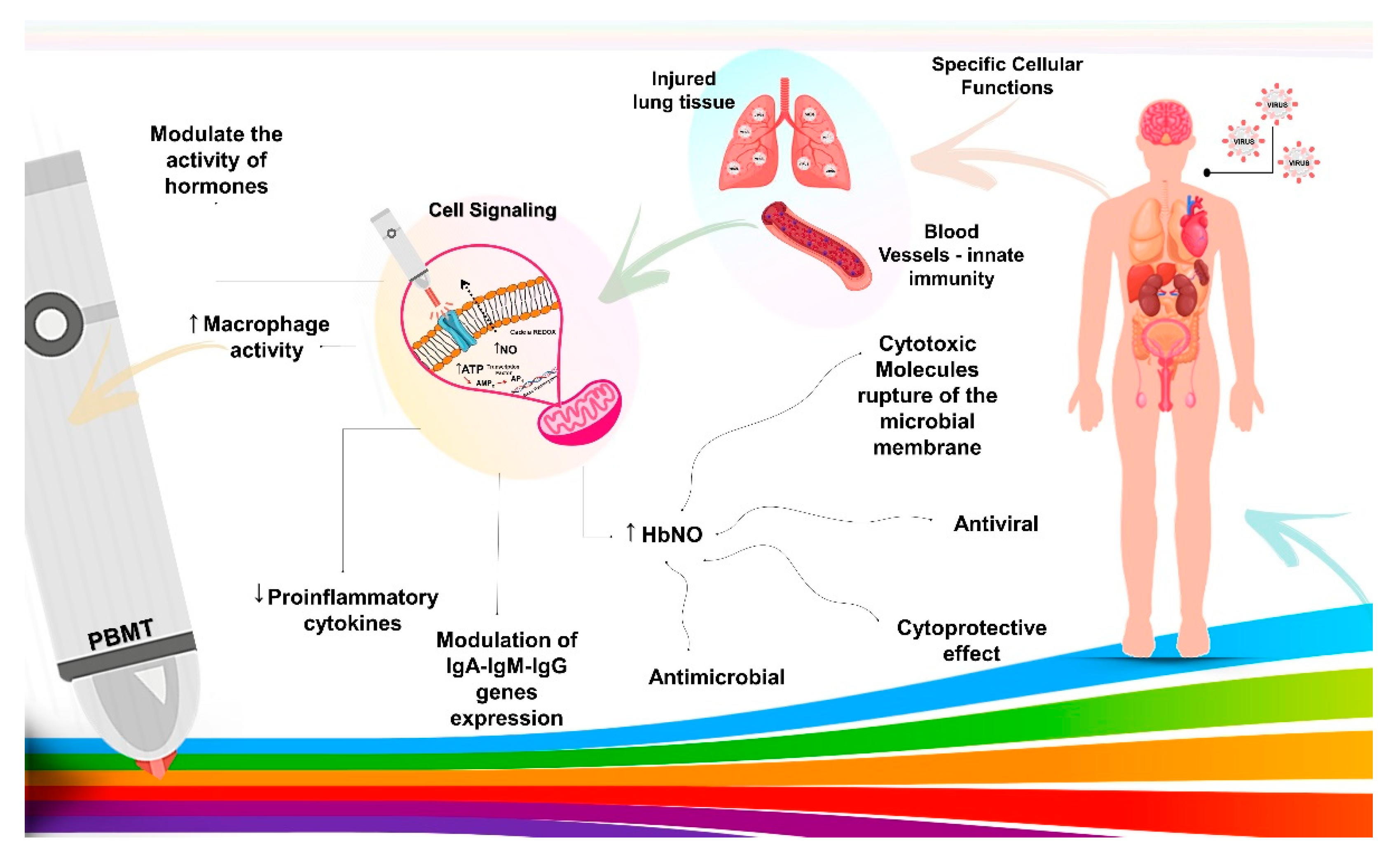