Effects and Safety of Convalescent Plasma Administration in a Group of Polish Pediatric Patients with COVID-19: A Case Series

In total, 78 consecutive COVID-19 patients (defined as having a SARS CoV-2-positive nasopharyngeal swab with real-time RT-PCR) attending the COVID-19 hospital units were enrolled in the study. The study protocol was approved by the internal review board (protocol number: 165/2020) and all patients provided informed consent. Clinical outcomes were registered according to the highest rank in the World Health Organization’s (WHO) ordinal scale of COVID-19 severity [5]: no limitation of activities (1), limitation of activities (2), hospitalized without oxygen therapy (3), oxygen by mask or nasal prongs (4), non-invasive ventilation or high-flow oxygen (5), intubation and mechanical ventilation (6), ventilation with additional organ support (7), or death (8).

Standard statistical methods were used to describe patients’ demographics (age, sex), clinical status (comorbidities and other previous infections), and antibodies against NP of HCoV-229E (NP.229E), HCoV-NL63 (NP.NL63), HCoV-OC43 (NP.OC43), HCoV-HKU1 (NP.HKU1), and 3 different antigens of SARS CoV-2 (NP.SARS.2, RBD.SARS.2, S1.SARS.2).
A frequency analysis was conducted for the considered outcome “maximal WHO score” during the disease course. This dependent variable was defined by the different levels of disease, from score 0 corresponding to an asymptomatic status to score 8, indicating severe diseases.
The partial correlation coefficients were used to measure the relationship between the different independent variables adjusted for sex and age. In particular, we focused our analysis on the nucleocapsid proteins (NP) of NP.229E, NP.NL63, NP.OC43, and NP.HKU1, applying a graphical analysis to describe the relation between them.
We used Poisson regression with robust variance [6] to calculate unadjusted and adjusted incidence rate ratios and corresponding 95% as estimates of the association between WHO scores, which are considered as dichotomous variables (0 corresponding to 0–4 score and 1 corresponding to 5–8) and clinical statuses (i.e., NP or other antibodies). Adjusted ratios were obtained using gender and age as confounders. A p-value < 0.05 was considered as statistically significant”. Statistical analyses were performed using R version 4.0.3 (2020-10-10).

The Coronaviridae family includes the 7 most known human coronaviruses that cause mild to moderate respiratory infections (i.e., HCoV-229E, HCoV-NL63, HCoV-OC43, HCoV-HKU1) as well as severe illness and death (MERS CoV, SARS CoV, SARS CoV-2) (summarized in Table 3). Severe infections induce hyperinflammatory responses that are often intensified by host adaptive immune pathways to profoundly advance disease severity. Proinflammatory responses are triggered by HCoV entry mediated by host cell surface receptors. Interestingly, 5 of the 7 strains use 3 cell surface metallopeptidases (CD13, CD26, and ACE2) as receptors, whereas the others employ O-acetylated-sialic acid (a key feature of metallopeptidases) for entry. It is unknown as to why HCoV evolved to use peptidases as their receptors, yet the peptidase activities of the receptors are dispensable, suggesting the virus uses/benefits from other functions of these molecules. Indeed, these receptors participate in the immune-modulatory pathways that contribute to the pathological hyperinflammatory response [7].
In this study, we have confirmed a previously recognized predictor of clinical outcomes (co-infections) and added previous immunity to alphacoronaviruses as an additional risk factor for WHO clinical severity score ≥ 5. There is little evidence of a correlation between SARS CoV-2 responses and HKU1 and NL63 responses [8]. No cross-reactivity of the SARS CoV-2 RBD-targeted antibodies was observed with HKU1, 229E, OC43, and NL63 [9]. In particular, antibodies against seasonal coronaviruses do not neutralize SARS-CoV-2 [10,11], with the only possible exception of 229E [12]. Nevertheless, one study reported cross-reactivity in anti-S2 antibodies between OC43 and SARS CoV-2 [13]. There is weak evidence of pre-existing SARS CoV-2 cross-reactive serum antibodies and limited cross-reactive memory B cells in pre-pandemic donors [14], and cross-reactivity to NL63 and 229E was more common in sub-Saharan Africa than in the USA [15]. Another study identified cross-reactivity between antibodies directed against SARS CoV-2 spike epitope 421–434 and NL63-RBM3 peptides [16]. Synchronous increase of OC43 IgG antibody levels was detected with SARS CoV-2 seroconversion in a subset of subjects for whom early infection sera were available before their SARS CoV-2 seroconversion, suggestive of an OC43 memory response triggered via SARS CoV-2 infection [17]. Among 17 severe COVID-19 cases, B-cell clones directed against seasonal CoV dominated and strongly increased over time. Seasonal CoV IgG responses that did not neutralize SARS CoV-2 were boosted well beyond detectable cross-reactivity during COVID19, particularly for an OC43 spike [18]. This was suggestive of OAS, which is theorized to have dismal consequences for coronaviruses [19,20]. ADE has been reported following vaccination or secondary infections with another coronavirus, RSV, Ebola, macrophage-tropic viruses (such as dengue virus), or non-macrophage-tropic respiratory viruses (such as RSV and measles). A detailed analysis has shown that antibodies to any viral epitope can induce ADE when present in sub-optimal titers or is of low affinity [21,22]. Neutralizing antibodies triggered by the sequential immunization of mice against SARS CoV and SARS CoV-2 are dominantly against the one that is used for priming [23]. Up to 50% of recovered SARS CoV-2 patients have been shown to mount antibody responses against unique epitopes of OC43, that were not detectable in unexposed individuals [24].
Complementary to our findings, patients with critical COVID-19 had significantly lower levels of OC43 and HKU1 nucleoprotein-specific antibodies compared to other COVID-19 patients [25]. The prognostic role of low OC43 antibodies was confirmed by another study: OC43 negative inpatients had an increased risk of critical disease (adjusted odds ratio 2.8), higher than the risk by increased age or body mass index (BMI), and lower than the risk by male sex [26]. These findings could also imply convalescent plasma collections (CCP): e.g., CCP units with greater NL63 antibody responses and lower HKU1 antibodies had higher neutralizing antibodies to the SARS CoV-2 receptor-binding domain (RBD) [27]. Another study found better outcome in recipients of CCP units with higher anti-NL63 or anti-OC43 antibodies [28].
Our study has several limitations, most importantly the low number of patients in several subgroups, which limits the statistical power and results in the wide confidence intervals of estimates reported in our study. We used a cross-sectional design and thus cannot exclude selection biases, particularly the incidence–prevalence one; however, we included consecutive patients without selection on disease severity. Given the current contradictory landscape, further studies on the prognostic role of previous immunity against endemic coronaviruses and prognosis of COVID-19 are warranted.

F.M. designed the study and revised the final version; D.F. reviewed the literature and wrote the first draft; E.L. and S.T. performed statistical analyses; A.B., L.A., and A.T. managed the laboratory procedures, data collection, and interpretation, P.G.S. and A.G. managed the laboratory procedures. All authors have read and agreed to the published version of the manuscript.

Study was approved by the internl review board (protocol number: 165/2020).

We declare we have no conflict of interest related to this manuscript. 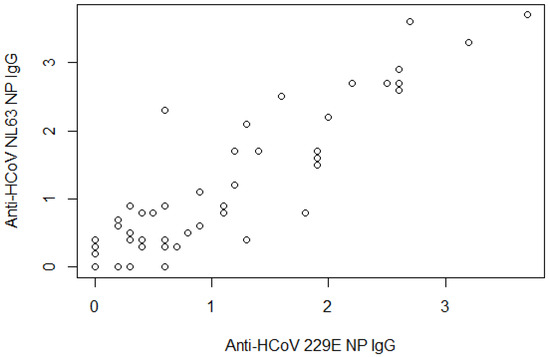