Although the mechanisms of toxic activity of tau are not fully recognized, it is supposed that the tau toxicity is related rather not to insoluble tau aggregates but to its intermediate forms. It seems that neurofibrillar tangles (NFTs) themselves, despite being composed of toxic tau, are probably neither necessary nor sufficient for tau-induced neuronal dysfunction and toxicity. Tau oligomers (TauOs) formed during the early stages of tau aggregation are the pathological forms that play a key role in eliciting the loss of neurons and behavioral impairments in several neurodegenerative disorders called tauopathies. They can be found in tauopathic diseases, the most common of which is Alzheimer’s disease (AD). Evidence of co-occurrence of b-amyloid, α-synuclein, and tau into their most toxic forms, i.e., oligomers, suggests that these species interact and influence each other’s aggregation in several tauopathies. The mechanism responsible for oligomeric tau neurotoxicity is a subject of intensive investigation. In this review, we summarize the most recent literature on the damaging effect of TauOs on the stability of the genome and the function of the nucleus, energy production and mitochondrial function, cell signaling and synaptic plasticity, the microtubule assembly, neuronal cytoskeleton and axonal transport, and the effectiveness of the protein degradation system.
Keywords: tau oligomers; neurotoxicity; tauopathies; genome; mitochondria; synapses; signal transduction; protein degradation tau oligomers; neurotoxicity; tauopathies; genome; mitochondria; synapses; signal transduction; protein degradation

3. Impairment of Energy Production in the Neuron

Since the discovery of tau mutation as a cause of FTLD, tau has been implicated in different synaptic dysfunctions, such as impaired LTP, reduced excitatory synaptic transmission, decreased level of PSD-95 and glutamate receptors, and increased levels of glutamate and excitotoxicity [110]. Usenovic et al. [111] noted that the model relevant for sporadic tauopathies, such as AD, in which the MAPT (microtubule-associated tau protein) mutations are absent would be one in which changes similar to those seen in AD would occur despite the absence of a mutation in the tau protein or lack of tau overexpression. They proposed such a model: the human forebrain neurons with active GABAergic and glutamatergic receptors, which were derived from induced pluripotent stem cells and treated with preparations of tau monomers and oligomers for 24 h. In this model, fourteen days after TauOs were applied, the number of synapses declined, basal GABA (gamma-aminobutyric acid) release moderately increased, and glutamate release remain unchanged. In addition to synaptic-related changes, they observed a host of other changes, which are similar to those characterizing AD. No such changes were observed when tau monomers were applied.
Effects of oligomeric tau treatment on synaptic integrity and function were also evident within a much shorter time frame. Lasagna-Reeves et al. [92] found in the neurons of the CA1 region of the hippocampus that the subcortical injection of TauOs reduced the levels of synaptophysin, which is a synaptic vesicle bound protein, and of septin-11, which is a protein involved in vesicle trafficking. On the other hand, the level of synapsin-1, the protein that regulates the reserve pool of synaptic vesicles, remained unchanged. These effects were observed about 30 h post-injection. The animals treated with TauOs did not distinguish the new object in the Object Recognition Task. This may mean that TauOs impair the ability to store newly acquired information, which is the kind of memory deficit occurring in early stage of AD. The injection of tau monomers and fibrillary forms neither affected the level of synaptic proteins nor caused memory deficit.
Fa et al. [112] showed that a brief exposure of mouse hippocampal slices to different recombinant human TauOs, but not tau monomers, reduced LTP as soon as 20 min after exposure to the oligomers. This finding was paralleled by the demonstration that two bilateral injections of TauOs performed shortly prior to the training into the dorsal mouse hippocampi impaired associative fear memory assessed 24 h later. The authors also demonstrated the worsening of spatial memory in a radial arm water maze after infusion of oligomeric tau.
Ondrejcak et al. [113] injected into brain ventricles soluble human recombinant tau aggregates and observed the potent inhibition of LTP at CA3 to CA1 synapses of the hippocampus, whereas no change in LTP followed the injection of tau monomers and tau fibrils. The gradual decline of LTP was observed during the 3 h period following tau injection. The effect of TauOs was prevented by the administration of anti-tau monoclonal antibody, Tau5 to the prion protein (PrP), which may suggest that the involvement of PrP in tau oligomers induced LTP reduction.
Hill et al. [114] delivered oligomeric full-length tau-441 (TauOs) in nanomolar concentration directly into mouse hippocampal CA1 pyramidal and neocortical layer V thick-tufted pyramidal cells. Within the first few minutes after intracellular TauOs delivery, the electrophysiological readouts remained unchanged, and some of them changed significantly after 40 min. The introduction of TauOs into hippocampal neurons increased the input resistance, membrane potential depolarization, and firing rate but decreased the amplitude, speed of rise, and speed of decay of action potentials. Examination of connected pairs of thick-tufted layer V neocortical pyramidal cells revealed that the delivery of TauOs into presynaptic cells impaired within a short time frame basal synaptic transmission, which was associated with short-term depression. The delivery of TauOs into postsynaptic cells impaired LTP, which may indicate that the presence of TauOs in postsynaptic cells interferes with synaptic plasticity. The delivery of tau monomers did not evoke any similar effects.
The observations presented above point collectively to TauOs being taken up by neurons from extracellular space, and once being inside the neurons, they change the functioning of synapses within a short time, even during tens of minutes. The relatively short time needed to reveal the effect of TauOs on various electrophysiological parameters, reported by Hill et al. [114], can be explained by the direct delivery of TauO into neurons, which shortened the time needed for TauO molecules to reach distal dendrites and axons, where they have been indeed clearly visible. These findings speak for the direct involvement of TauOs molecules in processes of synaptic transmission and plasticity. The common finding of reported data is the impairment of long-term potentiation (LTP). LTP is believed to be one of the cellular mechanisms that underlies learning and memory, and indeed, in the two studies [92,112], behavioral tests revealed TauOs were related to memory impairment.
The use of well-defined oligomeric forms of the tau protein in research shows that tau interacts with synaptic proteins. It plays a role in monitoring intracellular signaling pathways. The entering of pathological forms of tau into postsynaptic compartments and dendrites [110] causes a decrease in the number of synaptic vesicles [115] and reduction of synaptic proteins and dendritic spines, which in turn promotes synaptic loss [24], reduces neuronal signaling [116,117], and finally, induces memory impairment.

The central question emerging is whether soluble oligomers are really the most toxic form of tau. Answering this question will be helped by finding the answer to the question about the mechanisms of TauOs toxicity. It has to be realized that the term soluble tau oligomers is ill-defined, as there is a stunning variety of them. They may be aggregates of different tau monomers, which are possibly mutated as in FTDP-17, fragments of cleaved tau monomers, and in addition modified post-translationally in multiple ways. The relation between particular forms of TauOs and their toxicity has been not determined due to the lack of quantitative, high-resolution tools. It is hoped that the use of tau antibodies such as TOC1, T22, TOMA, and pS422, which selectively recognize dimers and higher order oligomers, will allow convincingly demonstrating the real toxic effect of tau oligomers on a number of cellular processes in tauopathies.
In the face of this seemingly unlimited variety of toxic entities, the interesting unified approach to the question of oligomers toxicity has been proposed by Kayed et al. [223]. They reason that there is a common conformation-dependent structure that is unique to soluble oligomers regardless of amino acid sequence, and that these oligomers share a common mechanism of toxicity. This common mechanism may rely on membrane permeabilization, which initiates a common group of detrimental processes, such as disturbed calcium homeostasis, ROS production, alteration of signaling pathways, and mitochondrial dysfunction [224]. On the other hand, given the specificity of tau functions, the oligomerization of tau may bring in addition tau-specific pathologic processes.
Assuming that tau-soluble oligomers are the most toxic tau forms, then the optimal way is to avoid the transition of monomers into oligomers (Figure 2). This might be achieved by stimulating the degradation of no-aggregated tau forms with UPS, CMA, and eMI. Once toxic oligomers are produced, they might be promptly turned into insoluble tau aggregates and then degraded by macroautophagy. Such consideration points toward therapeutic strategies, as mentioned in this review i.e., modifying the chaperone–client protein interaction and intensifying the macrophagy pathway in various ways, which is the direction that seems really promising at present.

This work was supported by TauRx Therapeutics Ltd. and by statutory funds from the Mossakowski Medical Research Centre, Polish Academy of Sciences and the Nencki Institute of Experimental Biology PAS. 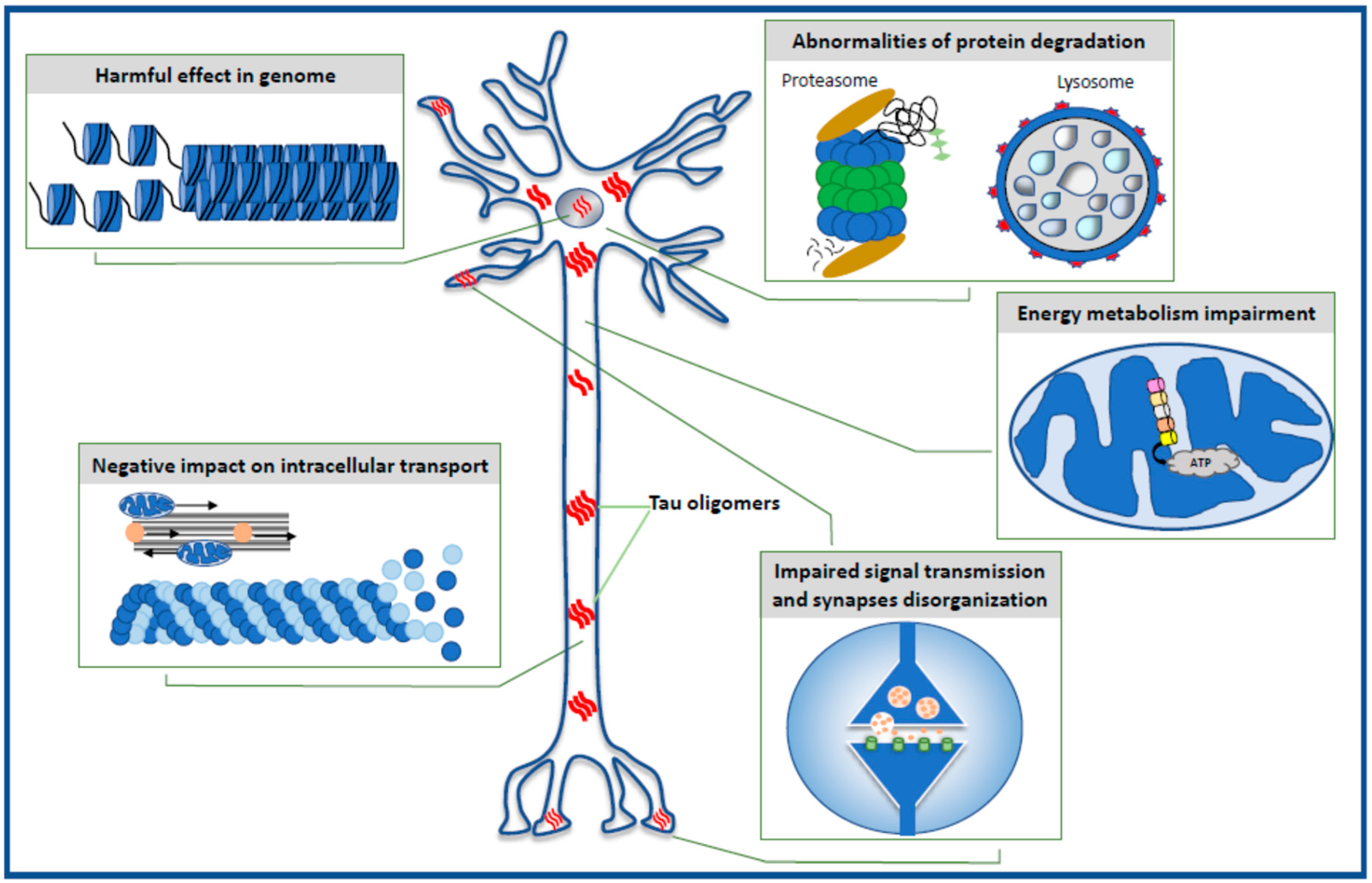