Macrobiont: Cradle for the Origin of Life and Creation of a Biosphere
Previous Article in Journal

The Habitability of the Galactic Bulge

Extremophiles are optimal models in experimentally addressing questions about the effects of cosmic radiation on biological systems. The resistance to high charge energy (HZE) particles, and helium (He) ions and iron (Fe) ions (LET at 2.2 and 200 keV/µm, respectively, until 1000 Gy), of spores from two thermophiles, Bacillushorneckiae SBP3 and Bacilluslicheniformis T14, and two psychrotolerants, Bacillus sp. A34 and A43, was investigated. Spores survived He irradiation better, whereas they were more sensitive to Fe irradiation (until 500 Gy), with spores from thermophiles being more resistant to irradiations than psychrotolerants. The survived spores showed different germination kinetics, depending on the type/dose of irradiation and the germinant used. After exposure to He 1000 Gy, D-glucose increased the lag time of thermophilic spores and induced germination of psychrotolerants, whereas L-alanine and L-valine increased the germination efficiency, except alanine for A43. FTIR spectra showed important modifications to the structural components of spores after Fe irradiation at 250 Gy, which could explain the block in spore germination, whereas minor changes were observed after He radiation that could be related to the increased permeability of the inner membranes and alterations of receptor complex structures. Our results give new insights on HZE resistance of extremophiles that are useful in different contexts, including astrobiology. View Full-Text
Keywords: Bacillus; extremophiles; heavy ion particle (HZE) radiations; nutrient germinants; spore germination; spore resistance Bacillus; extremophiles; heavy ion particle (HZE) radiations; nutrient germinants; spore germination; spore resistance
►▼ Show Figures 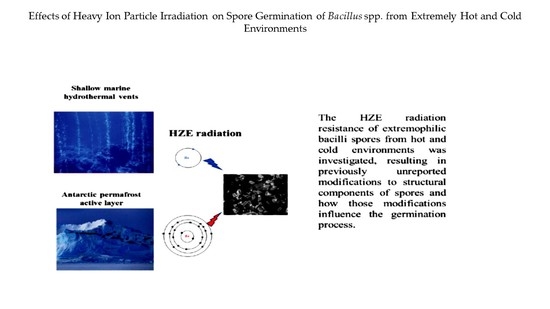