:
More than 120 cannabinoids were isolated from Cannabis sativa. In particular, Cannabidiol (CBD) and Cannabigerol (CBG) represent the two most studied non-psychoactive cannabinoids. However, CBG is less studied and less data are available on its biological properties and influence on synaptic transmission. On the contrary, CBD is already known to modulate brain excitatory glutamate, inhibitory γ-aminobutyric acid (GABA) and dopamine neurotransmission. In this study, using Next-Generation Sequencing (NGS) technology, we evaluated how CBG (1 or 5 µM) and CBD (1 or 5 µM) influence the transcriptome of the main neurotransmission pathways in NSC-34 motor neuron-like cells. At first, we evaluated that CBG and CBD were not cytotoxic and decreased the expression of pro-apoptotic genes. CBG and CBD are able to influence the expression of the genes involved in glutamate, GABA and dopamine signaling. Interestingly, the transcriptional changes induced by CBG were similar compared to CBD.
Keywords:
Cannabidiol; Cannabigerol; Glutamatergic synapses; GABAergic synapses; motor neuron-like cells; transcriptomic analysis

Cannabis sativa is a plant belonging to the Cannabaceae family and represents a reservoir of cannabinoids, knowns for their biological properties [1]. Delta-9-tetrahydrocannabinol (Δ9-THC) is the most abundant psychotropic compound. However, other phytocannabinoids such as Cannabidiol (CBD) and Cannabigerol (CBG) can be isolated from Cannabis sativa (Figure 1). CBG and CBD have the advantage of being two non-psychotropic phytocannabinoids that show different health-promoting effects.
CBD and CBG exert their activity through interaction with multiple molecular sites. These phytocannabinoids interact with cannabinoid receptors (CBs) coupled to G proteins, located in regions of the brain associated with important neurological processes [2]. However, these two cannabinoids are characterized by different action profiles. In particular, CBD shows a low affinity for CBs, acting as a negative allosteric modulator of CB1 receptors and as an inverse agonist of CB2 receptors [3]. Instead, CBG is a partial CB1 and CB2 receptor agonist. Moreover, CBG and CBD are also capable of regulating G protein-coupled receptors (GPCRs) [4]. In addition, CBD is a partial agonist at dopamine D2 receptors [5].
Although these two phytocannabinoids own multiple biological targets, an important aspect could be their influence on synaptic pathways. Glutamate, GABA and dopamine are among the main neurotransmitters in the brain. In particular, glutamate and GABA are involved in excitatory and inhibitory neurotransmission, respectively [6,7]. Glutamate, an excitatory neurotransmitter, plays a key role in synaptic transmission, synaptic plasticity, neuronal migration, neuronal excitability, long-term potentiation and long-term depression [8]. GABA, an inhibitory neurotransmitter, is involved in the modulation of synaptic transmission, in the promotion of neuronal development, in the prevention of insomnia and depression, in motor cortical plasticity and in learning [9,10,11,12]. Dopamine is a monoamine catecholamine neurotransmitter that regulates motor functions, motivation, cognition, emotion and neuroendocrine secretion. Regarding these synaptic pathways, less studies are available for CBG, while only for CBD there are some data. Indeed, it is known that CBD promotes the transmission of glutamate and GABA [13,14]. CBD can also functionally regulate dopaminergic transmission [15,16]. Then, there is a great interest to study and deeply analyze the biological properties of CBG.
Using the NGS analysis, we aim to evaluate how CBG and CBD (1 or 5 µM) influence the expression profile of the genes involved in neurotransmission pathways in NSC-34 motor neuron-like cells.

In order to assess the cytotoxic effects of CBD and CBG, NSC-34 motor neuron-like cells were exposed to a 1 or 5 µM concentration of CBD or CBG, and the cell viability was evaluated. CBD or CBG at all doses tested (Figure 2) did not show cytotoxicity, as demonstrated by Thiazolyl Blue Tetrazolium Bromide (MTT) assay. Indeed, the percentage of viable cells was relatively similar to the control cells (CTR-NSC-34) in all groups. We also analyzed NSC-34 cells incubated with dimethyl sulfoxide (DMSO < 0.1%), and no cytotoxicity was observed.

We carried out the RNA-seq analysis for each of the two different doses (1 and 5 µM) of the CBG and CBD compared to the control. The NGS analysis revealed in the final demultiplexed FastQ file 6,008,356 for CTR-NSC-34, 8,886,408 reads for CBG at 1 µM and 10,341,470 for CBG at 5 µM; 10,245,166 reads for CBD at 1 µM and 10,286,312 reads for CBD at 5 µM. To describe the transcriptomic analysis, we depicted a Volcano Plot for each of the doses of the CBG (Supplementary Figure S1) and of the CBD treatment (Supplementary Figure S2). We then applied the cut-off on the q-value (0.05) and on the fold change (0.7). Specifically, we identified 3917 genes differentially expressed at 1 µM of CBG and 3945 at 5 µM. As showed in the Venn diagram in Figure 3A, both the doses of CBG modulated 2844 genes. Instead, 1101 genes were modulated exclusively at dose 5 µM, while 1073 genes at dose 1 µM. About CBD, 3986 genes were differentially expressed at 1 µM and 4075 at 5 µM. Again, as shown in Figure 3B, we observed 3079 genes modulated simultaneously by doses of 5 and 1 µM. The amount of 5 µM of CBD also modulated 996 genes exclusively, while CBD 1 µM 907 genes. We also compared CBG and CBD for each concentration (Figure 3C,D). Regarding the 1 µM dose, CBG exclusively modulated 986 genes, while CBD, 1055. However, the majority of the genes (2931) were commonly modulated between CBD and CBG 1 µM. Regarding the 5 µM dose, CBG modulated 1005 genes, while CBD, 1135. Instead, 2940 genes were modulated by both CBG and CBD at the same dose of 5 µM.
We also compared CBG and CBD at both the concentrations (Figure 4). Interestingly, the highest number of genes was commonly modulated by both compounds at both concentrations (2227 genes).
To confirm the non-cytotoxicity of CBG or CBD, we analyzed the genes involved in the apoptosis (Table 1). We observed that the anti-apoptotic genes thymoma viral proto-oncogene 1 (AKT1), activating transcription factor 4 (ATF4) and BCL2-like 1 (BCL2L1) were upregulated, while the pro-apoptotic genes eukaryotic translation initiation factor 2 alpha kinase 3 (EIF2AK3), endoplasmatic reticulum (ER) to nucleus signaling 1 (ERN1), mitogen-activated protein kinase kinase kinase 5 (MAP3K5), poly(ADP-ribose) polymerase family, member 4 (PARP4), caspase 6 (CASP6) and caspase 8 (CASP8) were downregulated. Interestingly, CASP6 was significantly expressed only in CBD at 5 µM, while CASP8 only in CBG at 1 µM and in CBD at 5 µM.

4.1. Extraction and Isolation of CBG and CBD

Cannabis sativa was supplied by greenhouse cultivation at CREA-CIN (Rovigo, Italy) in compliance with their legal status (authorization SP/106 23/05/2013 of the Ministry of Health, Rome, Italy). CBG and CBD were isolated and purified (with greater than 99% purity) in agreement to a standardized protocol to avoid any trace of Δ9-THC [55,56].

NSC-34 motor neuron-like cell line was purchased from Cellutions Biosystems Inc., Cedarlane (Burlington, ON, Canada). NSC-34 cells were cultured in DMEM-high glucose medium (Sigma-Aldrich, Saint Louis, MO, USA) supplemented with 10% FBS (Sigma-Aldrich, Saint Louis, MO, USA), at 37 °C in a moisturized atmosphere of 5% CO2 and 95% air. In order to evaluate the effects of CBG and CBD treatments, NSC-34 cells were treated for 24 h with various concentrations of CBG or CBD, namely 1 or 5 µM of CBG or CBD (DMSO < 0.1%). At the end of the treatment, cells were harvested for RNA extraction. All the experiments were performed in triplicate.

The effects of the treatment with CBG and CBD on cell viability were evaluated using the MTT assay. NSC-34 motor neuron-like cells were cultured in 96-well plates and incubated for 24 h with 1 or 5 µM CBG and 1 or 5 µM CBD. At the end of the treatment, cells were incubated with a fresh medium containing MTT (0.5 mg/mL; Sigma-Aldrich) at 37 °C for 4 h. Formazan crystals were dissolved in acidic isopropanol at 37 °C for 1 h, and the optical density was evaluated by spectrophotometric measurement of absorbance. The experiments were performed in triplicate.

The results are expressed by the mean ± SD. Statistical analysis of cell viability was performed using GraphPad Prism version 7.0 software (GraphPad Software, La Jolla, CA, USA). In order to test the normality of the data, the Shapiro–Wilk normality test was performed. All the groups appeared to be normally distributed against a p-value of 0.05. The multiple comparisons were carried out using one-way ANOVA test and Bonferroni posthoc test. A p-value less than or equal to 0.05 was considered statistically significant.

The obtained libraries were then sequenced with an Illumina MiSeq Instrument. The quality of the raw data, stored in Fastq files, was confirmed by the fastQC tool, while Trimmomatic (version 0.38, Usadel Lab, Aachen, Germany) [58] was used to trimmer the bases with low quality and to remove the adapters. The cleaned reads were aligned to the reference genome of mouse organism GRCm38 and sorted using Spliced Transcripts Alignment to a Reference (STAR) RNA-seq aligner [59]. For each genome region, the reads identified were counter using python and, specifically, the package htseq-count [60]. The genes that differed in a statistical significant matter between CTR-NSC-34 and each treatment were obtained using the programming language R and the package DESeq2 of Bioconductor [61]. We rejected all the genes whose fold change was into the range of −0.7 and 0.7. Moreover, the Benjamini–Hochberg procedure was used to correct the p-value; only the genes with a q-value > 0.05 were analyzed.

This study was supported by a Current Research Funds 2020, Ministry of Health, Italy.

The authors would like to thank Appendino Giovanni (Università del Piemonte Orientale “Amedeo Avogadro”, Novara, Italy) and Gianpaolo Grassi (CREA, Rovigo, Italy) for extraction and isolation of CBD and CBG.

The authors declare no conflict of interest. The funder did not participate in any phase of the study, including the publication of data. 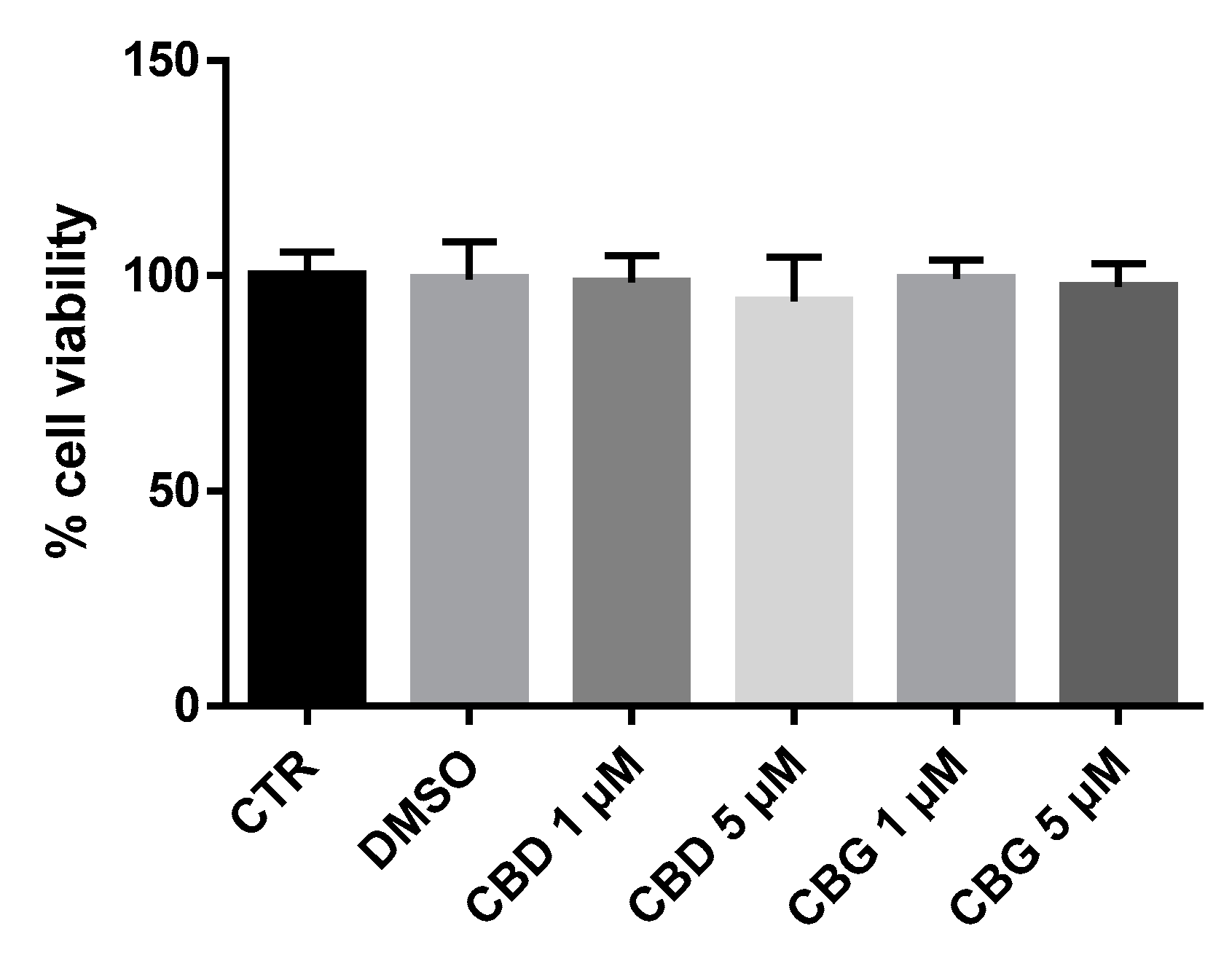 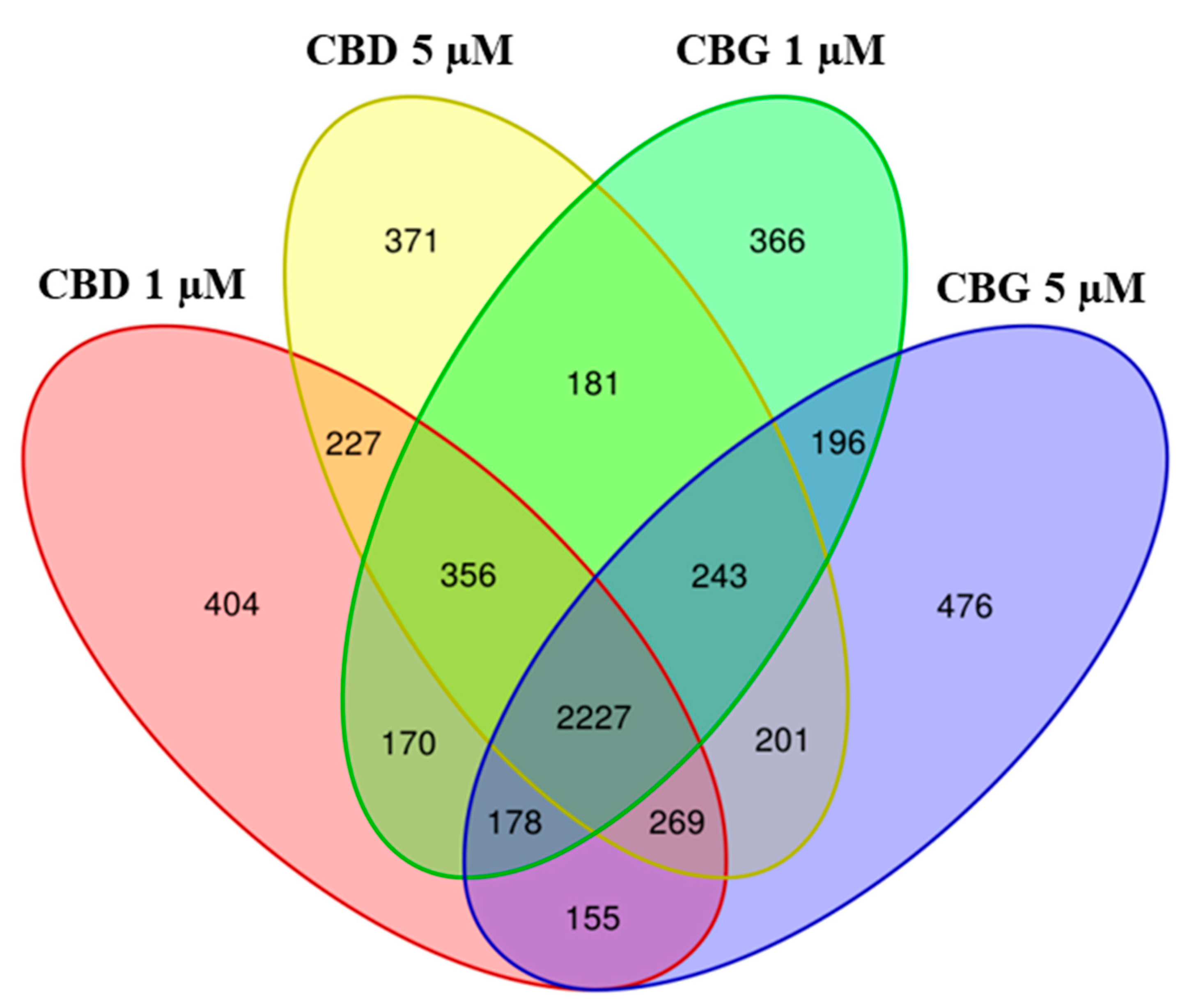 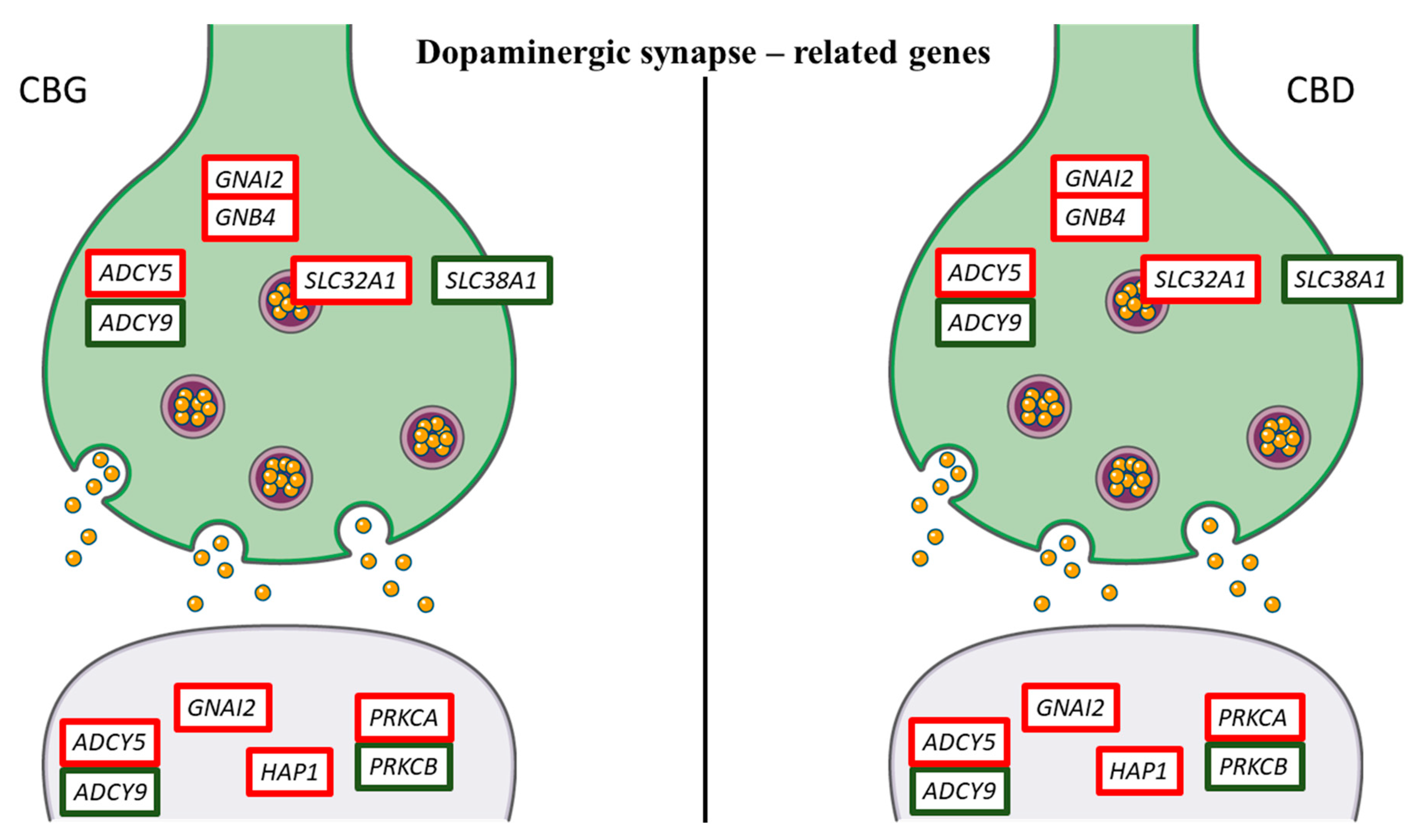