The purpose of this paper is to choose a new topology for bearingless flux-switching slice motors, regarding the number of stator and rotor poles, with a combined winding set. Additionally, the selected motor topology is optimized with finite element method (FEM) simulations to improve the performance. Bearingless slice drives feature a magnetically-suspended rotor disk passively stabilized by reluctance forces due to a permanent magnet (PM) bias flux in the air gap and actively controlled by the generation of radial bearing forces and motor torque. Usage of the combined winding set, where each phase generates both motor torque and suspension forces, opens the opportunity for a new topology. The topology choice and optimization are based on FEM simulations of several motor optimization criteria, as the passive axial, tilting and radial stiffness values and the active torque and bearing forces, which are simulated regarding the motor height and specific stator and rotor parameters. Saturation, cogging torque and cogging forces are also analyzed. The 3D FEM program ANSYS Maxwell 2015 was used. The results led to an optimized bearingless flux-switching motor topology with six new stator segments and seven rotor poles. By optimizing the geometry, a considerable improvement of performance was reached. This geometry optimization is a base for a future prototype model. View Full-Text
Keywords: bearingless flux-switching motor; combined winding set; finite element optimization bearingless flux-switching motor; combined winding set; finite element optimization
►▼ Show Figures 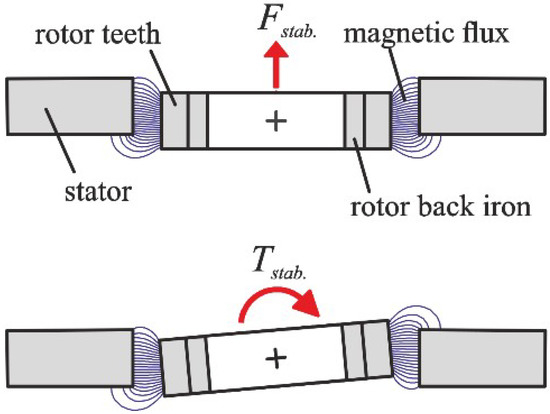