Spatial and Temporal Controls on the Distribution of Indium in Xenothermal Vein-Deposits: The Huari Huari District, Potosí, Bolivia
Previous Article in Special Issue

A 10.5 km2 3D seismic survey was acquired over the Kylylahti mine area (Outokumpu mineral district, eastern Finland) as a part of the COGITO-MIN (COst-effective Geophysical Imaging Techniques for supporting Ongoing MINeral exploration in Europe) project, which aimed at the development of cost-effective geophysical imaging methods for mineral exploration. The cost-effectiveness in our case was related to the fact that an active-source 3D seismic survey was accomplished by using the receiver spread originally designed for a 3D passive survey. The 3D array recorded Vibroseis and dynamite shots from an active-source 2D seismic survey, from a vertical seismic profiling experiment survey, as well as some additional “random” Vibroseis and dynamite shots made to complement the 3D source distribution. The resulting 3D survey was characterized by irregular shooting geometry and relatively large receiver intervals (50 m). Using this dataset, we evaluate the effectiveness of the standard time-imaging approach (post-stack and pre-stack time migration) compared to depth imaging (standard and specialized Kirchhoff pre-stack depth migration, KPreSDM). Standard time-domain processing and imaging failed to convincingly portray the first ~1500 m of the subsurface, which was the primary interest of the survey. With a standard KPreSDM, we managed to obtain a good image of the base of the Kylylahti formation bordering the extent of the mineralization-hosting Outokumpu assemblage rocks, but otherwise the image was very noisy in the shallower section. The specialized KPreSDM approach (i.e., coherency-based Fresnel volume migration) resulted in a much cleaner image of the shallow, steeply dipping events, as well as some additional deeper reflectors, possibly representing repetition of the contact between the Outokumpu assemblage and the surrounding Kalevian metasediments at depth. View Full-Text
Keywords: 3D seismic; pre-stack depth migration; hardrock seismic exploration 3D seismic; pre-stack depth migration; hardrock seismic exploration
►▼ Show Figures 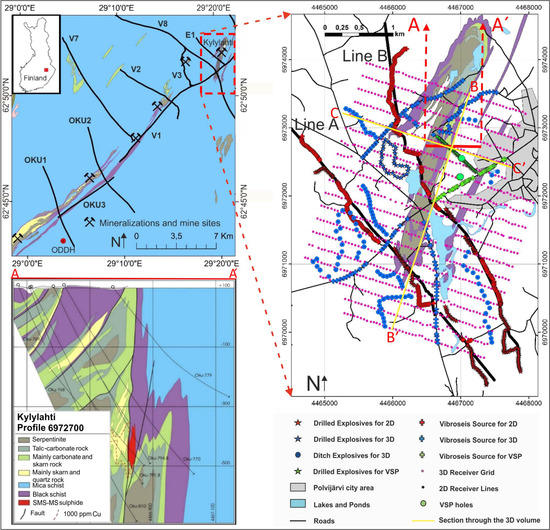