Hydrochemistry, Distribution and Formation of Lithium-Rich Brines in Salt Lakes on the Qinghai-Tibetan Plateau

Lithium occurrences were detected in Upper Permian (Zechstein) salt rocks and saline solutions of the Gorleben and Morsleben salt structures, northern Germany. The brine occurrences were mainly connected to anhydrite rock-bearing formations and to lithological boundaries. Most of these brines display a high Mg content and were accordingly interpreted as intrasalinar solutions, which developed during sedimentation, diagenesis, and the subsequent rock–fluid interaction. These Mg-rich brines frequently show high Li concentrations. One of the assumptions made, is that Li was leached from phyllosilicates, since no natural Li-bearing salt minerals are known to date. To improve the understanding of the origin of Li in the brines, leaching experiments were performed on the Li-bearing phyllosilicate Lepidolite. Lepidolite with a Li content of 2.42 wt. % served as an analogue material, which was exposed to 18 saline solutions of different composition for a period of three years. The most pronounced leaching effect (53.36 µg Li/g in the brine) was observed during the interaction with a 0.03 mol/kg H2O MgCl2 solution, the second most pronounced by modern seawater interaction. The experiments show that the amount of Li leached from the lepidolite is dependent on brine composition. View Full-Text
Keywords: Permian phyllosilicate bearing strata; brines; leaching experiments; lepidolite; lithium Permian phyllosilicate bearing strata; brines; leaching experiments; lepidolite; lithium
►▼ Show Figures 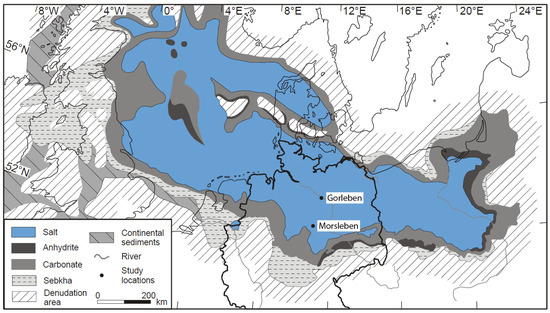