The formation of Mg-rich carbonates in continental lakes throughout the world is highly relevant to irreversible CO2 sequestration and the reconstruction of paleo-sedimentary environments. Here, preliminary results on Mg-rich carbonate formation at the coastal zone of Lake Vtoroe Zasechnoe, representing the Setovskiye group of water bodies located in the forest-steppe zone of Southwest Western Siberia, are reported. The Setovskiye lakes are Cl−–Na+–(SO42−) type, alkaline, and medium or highly saline. The results of microscopic and mineralogical studies of microbialites from shallow coastal waters of Lake Vtoroe Zasechnoe demonstrated that Mg in the studied lake was precipitated in the form of hydrous Mg carbonates, which occur as radially divergent crystals that form clusters in a dumbbell or star shape. It is possible that hydrous Mg carbonate forms due to the mineralization of exopolymeric substances (EPS) around bacterial cells within the algal mats. Therefore, the Vtoroe Zasechnoe Lake represents a rare case of Mg-carbonates formation under contemporary lacustrine conditions. Further research on this, as well as other lakes of Setovskiye group, is needed for a better understanding of the possible role of biomineralization and abiotic mechanisms, such as winter freezing and solute concentration, in the formation of authigenic Mg carbonate in modern aquatic environments. View Full-Text
Keywords: Western Siberia; Mg carbonates; Mg-Ca carbonates; hydromagnesite; lakes; biomineralization Western Siberia; Mg carbonates; Mg-Ca carbonates; hydromagnesite; lakes; biomineralization
►▼ Show Figures 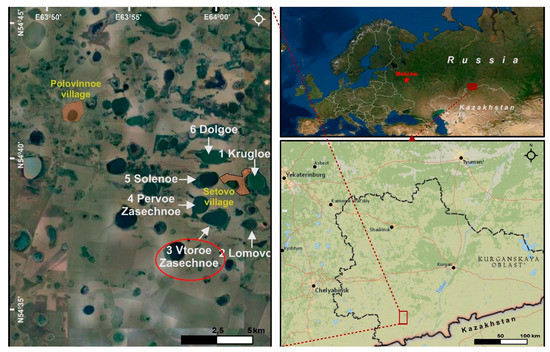