The Content of Toxic Metals in Agricultural Produce near a Coal Mine: Case Study KCB in Lazarevac, Serbia
Previous Article in Special Issue

A. ferrooxidans and their metabolic products have previously been explored as a viable alternative depressant of pyrite for froth flotation; however, the mechanism by which separation is achieved is not completely understood. Scanning electron microscopy (SEM), photoemission electron microscopy (PEEM), time-of-flight secondary ion mass spectrometry (ToF-SIMS) and captive bubble contact angle measurements have been used to examine the surface physicochemical properties of pyrite upon exposure to A. ferrooxidans grown in HH medium at pH 1.8. C K-edge near edge X-ray absorption fine structure (NEXAFS) spectra collected from PEEM images indicate hydrophilic lipids, fatty acids and biopolymers are formed at the mineral surface during early exposure. After 168 h, the spectra indicate a shift towards protein and DNA, corresponding to an increase in cell population and biofilm formation on the surface, as observed by SEM. The Fe L-edge NEXAFS show gradual oxidation of the mineral surface from Fe(II) sulfide to Fe(III) oxyhydroxides. The oxidation of the iron species at the pyrite surface is accelerated in the presence of A. ferrooxidans and extracellular polymeric substances (EPS) as compared to HH medium controls. The surface chemical changes induced by the interaction with A. ferrooxidans show a significant decrease in surface hydrophobicity within the first 2 h of exposure. The implications of these findings are the potential use of EPS produced during early attachment of A. ferrooxidans, as a depressant for bioflotation. View Full-Text
Keywords: NEXAFS; PEEM; A. ferrooxidans; pyrite; ToF-SIMS; biofilm; EPS NEXAFS; PEEM; A. ferrooxidans; pyrite; ToF-SIMS; biofilm; EPS
►▼ Show Figures 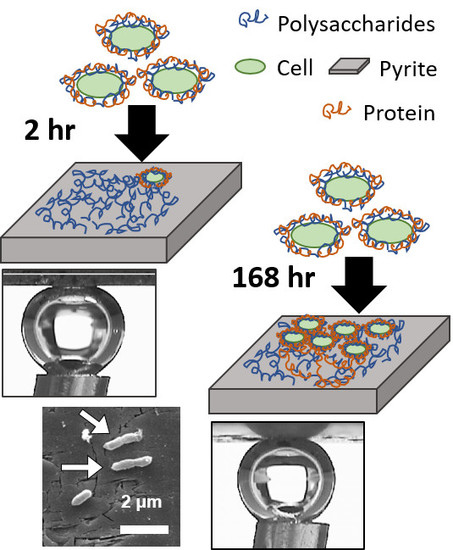