Stara Planina (also known as the Balkan mountain range) is known for numerous occurrences and deposits of uranium and associated radionuclides. It is also famous for its geodiversity. The geologic framework is highly complex. The mountain is situated between the latitudes of 43° and 44° N and the longitudes from 22°16′ to 23°00′ E. Uranium exploration and radioactivity testing on Stara Planina began back in 1948. Uranium has also been mined in the zone of Kalna, within the Janja granite intrusive. The naturally radioactive geologic units of Stara Planina are presented in detail in this paper. The main sources of radioactivity on Stara Planina can be classified as: 1. Granitic endogenous—syngenetic–epigenetic deposits and occurrences; 2. Metamorphogenic—syngenetic; and 3. Sedimentary, including occurrences of uranium deposition and fluctuation caused by water in different types of sedimentary rocks formed in a continental setting, which could be classified under epigenetic types. The area of Stara Planina with increased radioactivity (higher than 200 cps), measured by airborne gamma spectrometry, is about 380 square kilometers. The highest values of measured radioactivity and uranium grade were obtained from a sample taken from the Mezdreja uranium mine tailing dump, where 226Ra measures 2600 ± 100 Bq/kg and the uranium grade is from 76.54 to 77.65 ppm U. The highest uranium (and lead) concentration, among all samples, is measured in graphitic schist with high concentrations of organic (graphitic) material from the Inovska Series—99.47 ppm U and 107.69 ppm Pb. Thorium related radioactivity is the highest in granite samples from the Janja granite in the vicinity of the Mezdreja granite mine and the Gabrovnica granite mine tailing dump, and it is the same—250 ± 10 Bq/kg for 232Th, while the thorium grade varies from 30.82 to 60.27 ppm Th. In gray siltstones with a small amount of organic material, the highest radioactivity is related to potassium—2080 ± 90 Bq/kg for 40K. View Full-Text
Keywords: geology; radioactivity; uranium; sampling; Stara Planina geology; radioactivity; uranium; sampling; Stara Planina
►▼ Show Figures 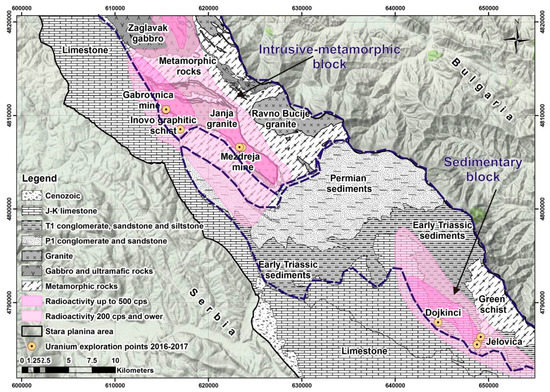