Possible Involvement of Permian Phosphoria Formation Oil as a Source of REE and Other Metals Associated with Complex U-V Mineralization in the Northern Bighorn Basin?

The Petrography, Mineralogy and Geochemistry of Some Cu- and Pb-Enriched Coals from Jungar Coalfield, Northwestern China

The petrological, geochemical, and mineralogical composition of the Carboniferous-Permian coal deposit in the Jungar coalfield of inner Mongolia, Northwestern China, were investigated using optical microscopy and field emission scanning electron microscopy in conjunction with an energy-dispersive X-ray spectrometer (SEM-EDX), as well as X-ray powder diffraction, X-ray fluorescence, and inductively coupled plasma mass spectrometry. The Jungar coal is of high volatile C/B bituminous quality with 0.58% vitrinite reflectance and has a low sulfur content of 0.70% on average. Inertinite (mineral-free basis) generally dominates in coal from the lower part of the Shanxi formation, and vitrinite is the major maceral assemblage in the coal from the Taiyuan formation, which exhibits forms suggesting variation in the sedimentary environment. The Jungar coal is characterized by higher concentrations of copper (Cu) in No. 6 coal, at 55 μg/g, and lead (Pb) in No. 4 coal at 42 μg/g. Relative to the upper continental crust, the rare earth elements (REE) in the coal are characterized by light and medium–heavy REE enrichment. The minerals in the Jungar coal are mainly kaolinite, dickite, pyrite, calcite, siderite, quartz, and, to a lesser extent, gypsum and K-feldspar. The enrichment and occurrence of the trace elements, and of the minerals in the coal, are attributed to the fragmental parent rock during diagenesis and coalification. The main elements with high enrichment factors, Cu and Pb, overall exhibit a notably inorganic sulfide affinity and a weak organic affinity. Primary and epigenetic sedimentary environment and the lithology of the terrigenous parent rock are the key factors that influence the occurrence and formation of Cu and Pb in coal. The depositional environment is more influential in the formation of Cu than Pb in coal. Lead is more easily affected by the terrigenous factors than Cu when they are under a similar depositional environment. View Full-Text
Keywords: Jungar coalfield; harmful trace elements; occurrence characteristics; enrichment genesis Jungar coalfield; harmful trace elements; occurrence characteristics; enrichment genesis
►▼ Show Figures 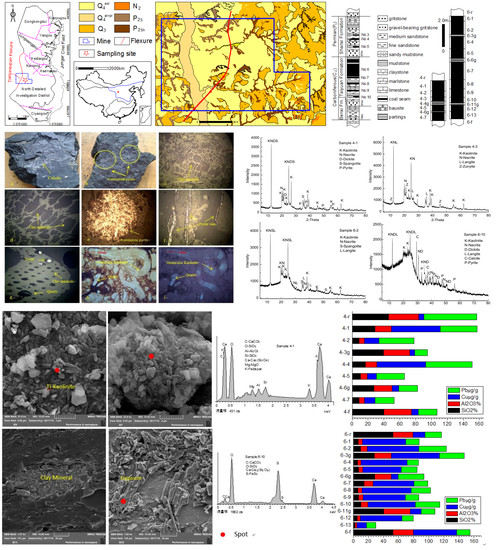