First Principles Thermodynamics of Minerals at HP–HT Conditions: MgO as a Prototypical Material

In this communication, we report the results of a preliminary neutron diffraction investigation of iron meteorites. These planetary materials are mainly constituted by metallic iron with variable nickel contents, and, owing to their peculiar genesis, are considered to offer the best constrains on the early stages of planetary accretion. Nine different iron meteorites, representative of different chemical and structural groups, thought to have been formed in very different pressure and temperature conditions, were investigated, evidencing variances in crystallites size, texturing, and residual strain. The variability of these parameters and their relationship, were discussed in respect to possible diverse range of petrological conditions, mainly pressure and cooling rate, experienced by these materials during the crystallization stage and/or as consequence of post accretion events.
Keywords: neutron scattering; iron meteorites; residual strain; texturing neutron scattering; iron meteorites; residual strain; texturing

It is currently accepted that, in the Solar System, planets formed by collisional growth from smaller bodies, which size ranges from powder to protoplanets [1]. There is a growing consensus that these bodies accreted early in the Solar System’s history since 26Al, which has a half-life of only 0.7 Myr, is considered the main source of the heat that melt the asteroids, allowing for the heavier components to separate from silicates forming the metallic cores [2]. After a more or less rapid crystallization, these protoplanets were shattered, and sometimes scattered, by asteroidal hypervelocity impacts. Shortly after the impacts, a large part of the mass aggregated again under gravity effect; nevertheless, when the velocity of the ejected fragments overcame the escape velocity, they abandoned the asteroid and travelled in the space taking on their own orbit. Then, eventually, were captured by Earth’s gravity crossing its atmosphere as meteors, and, some of them, falling on its surface as meteorites.
Iron meteorites are assumed to be fragments of asteroids cores produced by these primordial large impacts. If meteorites are large enough (more than a cubic decimeter), reheating effects yielded when they enter the Earth’s atmosphere only affect their very external portions, leaving the interior unaffected. This offers the possibility to study the pristine materials crystallized during the very early stages of planetary accretions, from which glimpses of the geophysical constrain of the processes that took place a few billions of years ago can be speculated.
The overwhelming bulk mineralogy of iron meteorites consists of Fe-Ni alloys; i.e., iron (α-(Fe, Ni), BCC structure, historically known as kamacite) and taenite (γ-(Fe, Ni), FCC structure). It is generally accepted that the kamacite phase, occurring as elongated plates or lamellae, is generated by a solid-state phase transformation at the taenite/taenite grain boundary when the material is slowly cooled down [2]. As a consequence, the fine intergrowth of these two phases, named Widmanstätten patterns, constitutes a peculiar feature of the most part of iron meteorites. The thickness of the kamacite lamellae (kamacite bandwidth) is primarily dictated by the bulk chemical composition, i.e., initial nickel content, the size of the pristine taenite crystals and the cooling rate; the higher the nickel content and the faster the cooling rate, the smaller the kamacite bandwidths [3].
The detailed knowledge of the texture of a meteorite, i.e., the size, shape, and distribution of crystallographic orientations of residual taenite crystal and kamacite lamellae, can provide useful insight about the process by which the materials formed and the composition of the parent asteroid. Traditionally, this goal is achieved by means of metallographic observation on specifically cut and polished portions of the sample. This approach is intrinsically destructive and cannot provide information about the residual stresses of the material. In recent years, techniques based upon penetrative probes such as hard X-rays radiations or neutrons gained a prominent position in the study of the metallic material crystal structure [4,5,6]. Respect to the classical approach these techniques offer the main advantage of being non-destructive. For such reason, they can be applied to determine texture and crystallographic features of precious or scarcely available samples, such as meteorites. For example, Hofler and coworkers [7] studied the texture of the Gibeon meteorite by means of neutron diffraction, Peetermans and coworkers [8] used energy-selective neutron imaging to obtain the texture of the Mont Dieu meteorite while neutron tomography was used to achieve three-dimensional (3D) spatial reconstruction of crystals in some iron meteorites [9]. Alternatively, conventional X-ray transmission radiography was applied to study the orientation of kamacite lamellae [10], and both, hard X-ray photoemission electron microscopy (HX-PEEM) [11], and X-ray synchrotron diffraction [12] were used to determine the metallographic properties of the Gibeon meteorite. However, to the best of our knowledge, these studies were limited to a very little number of meteorite samples and no determination of residual strain was attempted. Indeed, the presence of residual crystal lattice strain can be related to peculiar petrological conditions experienced by the samples during or after their formation. In accordance with the principal geophysics’ textbooks we assumed that crystallization from metallic melt took place in hydrostatic conditions. If so, homogeneous residual (compressive) strain can be attributed to the pressure experienced during the crystallization stage, strictly related to the size of the parent asteroid. Again, inhomogeneous or directional strains can be related to intense directional stresses experienced by the meteorite after its crystallization, namely hypervelocity asteroidal impacts whose effects were not cancelled by thermal annealing.
In this paper, we present the results of a preliminary investigation aiming to assess the feasibility of the analytical approach to cope with extraterrestrial metallic materials. On a set of nine iron or stony-iron meteorites belonging to different chemical groups, metallographic and structural parameters were determined via neutron diffraction investigation. Among this set of samples, large differences in texturing and crystallographic domains size were determined. Texturing means discrepancy between the diffraction pattern generated by a microstructurally oriented sample with respect to the one generated by an ideal isotropic homogeneous sample (namely a randomly oriented powder in the crystallographic meaning). By comparison with the chemical data and metallographic observations available in literature the new data here presented were tentatively attributed to possible different petrologic conditions experienced by these materials during, or after, the crystallization stage.

The meteorite samples were obtained from the Museo di Scienze Planetarie-Fondazione Parsec (Prato, Italy) and the Museo di Storia Naturale dell’Università degli Studi di Firenze (Firenze, Italy). Table 1 summarizes the characteristics of the investigated samples.
The samples were analysed using the Time of Flight Diffractometer INES (Italian Neutron Experimental Station) [16,17] at the ISIS neutron spallation source [18] (Rutherford Appleton Laboratory, Didcot, UK). The average thermal neutron flux of INES is about of 106 n·cm−2·s−1 [16] as measured through the integrated synchrotron proton current. After irradiation, the activation of the sample was measured using the Geiger counter provided on the beamline, and the samples were showing no activation at 5 min after removal from the beam-line.
The data reduction and focusing was performed using the Mantid code [19] and the data analysis on kamacite phase was carried on through the GSAS program [20] exploiting the EXPGUI interface [21]. The function peak profile used was number four since it is the one offering the best degree of detail in the diffraction peak shape analysis.
The microstructural properties were determined by analysing the shape and the relative intensity distribution of the kamacite diffraction peaks, while its lattice parameter (α-(Fe, Ni), size of the BCC cell), directly related to the Fe-Ni relative concentration [22], were determined by peaks displacement and exploited to evaluate the nickel content. In the set of samples analysed, kamacite resulted the main phase, therefore we carried out the microstructural analysis of this phase alone in order to determine the properties of the material and the relationship with the crystallization and post-annealing conditions. The size of the crystallographic domains was determined by applying the Scherrer law [20,21], using the Lorentzian broadening of the peaks [20]. The degree of intensity of the third type microstrain [20,21] was semi-quantitatively determined by exploiting the Gaussian broadening parameter S400 [20,21]. Finally, since in the time of flight approach, every detector at fixed position, provides a complete diffraction pattern [16], therefore the texturing, i.e., the presence of preferred crystallographic orientation, was qualitatively evaluated by visualizing the diffraction patterns as a function of the scattering angle.

Nine different iron meteorites, representative of different chemical groups, were analysed by means of neutron scattering. The diffraction data evidenced remarkable differences among the investigated samples regarding texturing, crystallite sizes, and internal strain. Texturing differences can be related to variable crystallization conditions. Rapid cooling rate during the accretion stage or reheating followed by a rapid cooling could account for a highly textured material. Crystallite sizes and internal strain seem to be reasonably related to rapid post accretion annealing or plastic deformation, such as hypervelocity impacts, or, for tiny samples, the simple atmospheric transit. Finally, size discrepancies between the measured kamacite cell parameters and their theoretical value, determined accounting the relative Ni content, were observed and tentatively related to the different pressures that were experienced by the meteorite during the accretion stage.
For the first time, differences in the texturing, residual strain, and cell size in iron meteorites were recognized in a non-destructive way. Even if a systematic study involving a much larger number of meteorite samples would be recommended to confirm these preliminary data, the analytical approach here described may represent a new and powerful tool for the investigation of the petrochemical conditions ruling the very early stages of formation of the Solar System.

The cooperation Agreement No. 06/20018 between CNR and STFC, concerning collaboration in scientific research at the spallation neutron source ISIS (UK), is gratefully acknowledged. S.C. would like to thank Regione Toscana for financial support of the project LTSP through the fund POR FSE 2007–2013 (Obiettivo 2, Asse IV). 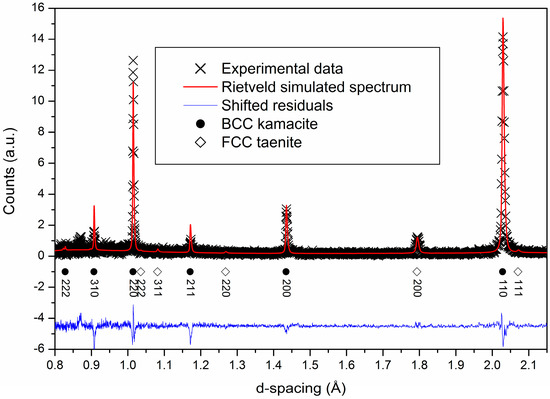 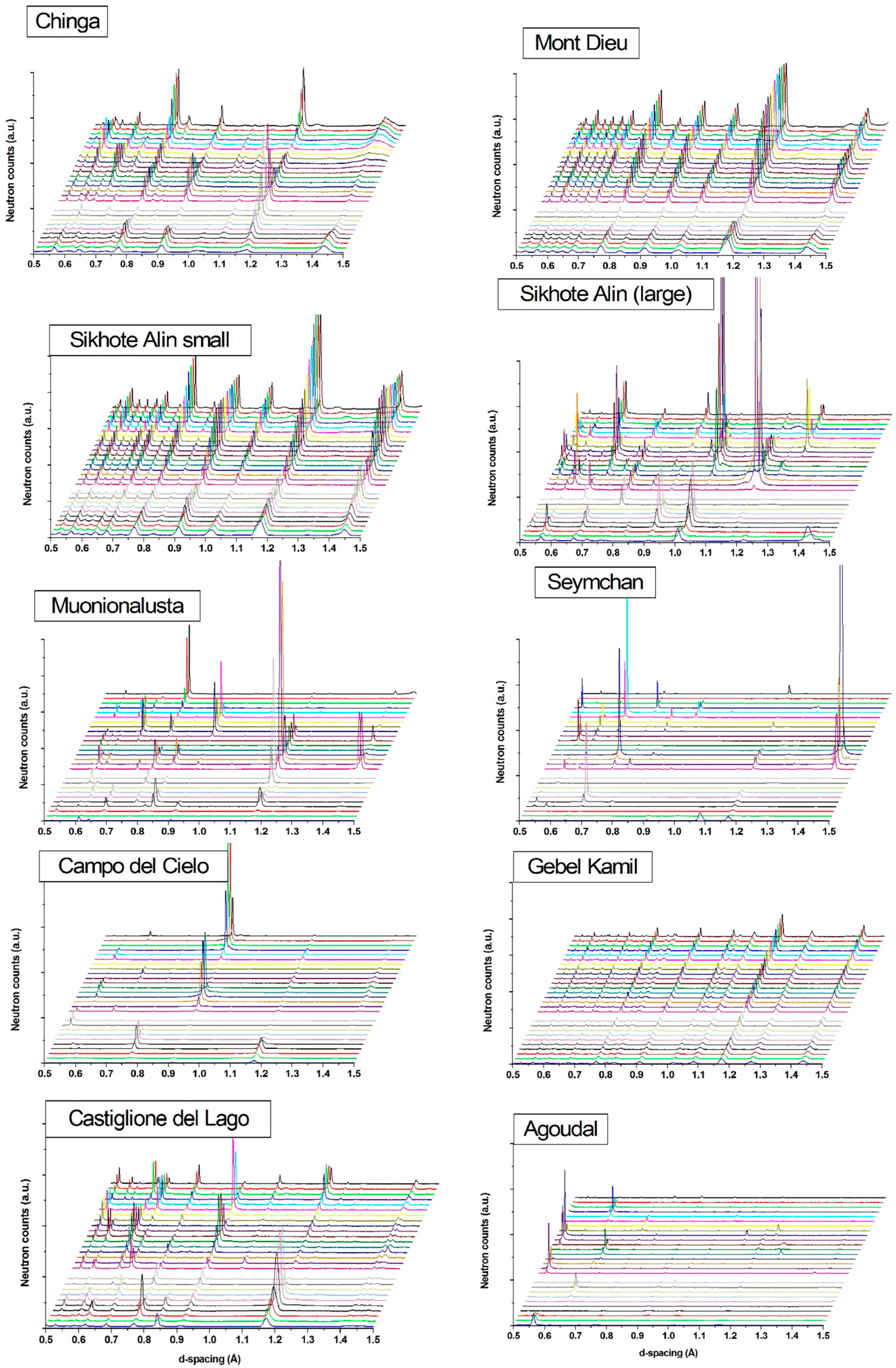