:
In this paper, the composite additive of CaF2/CaO was used to extract vanadium from stone coal, and the effect of roasting and leaching kinetics were studied. The purpose of this manuscript is to realize and improve the vanadium recovery from stone coal using the composite additive. The experimental results indicated that the roasted clinker can be obtained under the conditions of CaF2/CaO at a mass ratio of 2:3 and a total additive amount of 10 wt %, a roasting temperature 850 °C, and a roasting time of 90 min. The leaching rate of vanadium can reach 86.74%, which increased by 16.4% compared with that of blank roasting under the conditions including a leaching temperature of 950 °C, a sulfuric acid concentration of 15% (v/v), a leaching time of 2 h, and a ratio of liquid to solid of 3 mL/g. The phase transformation analysis indicated that the muscovite structure was effectively destroyed during the roasting process comparing with no additives, which provided the basis for vanadium dissociation. Roasting can promote the formation of calcium vanadate, which is beneficial to the leaching of vanadium. The vanadium leaching kinetic analysis indicated that the activation energy of the acid leaching reaction decreased from 42.50 KJ/mol in the blank roasting to 22.56 KJ/mol in the calcified roasting, and the reaction order, with respect to the sulfuric acid concentration, decreased from 1.15 to 0.85. Calcified roasting has a better mineral activation than blank roasting, which can accelerate the leaching of vanadium and reduce the dependence on high-temperature and high acid levels in the leaching process.
Keywords:
stone coal; calcified roasting; acid leaching; kinetics

The stone coal used in the experiment was from Hubei Province, China. Stone coal was first crushed by a jaw crusher, and then crushed to 0–3 mm using a roll crusher. The main chemical composition of the ore analysis results are shown in Table 1. Table 1 shows that V2O5 content in the ore is 0.77%, belonging to low-grade vanadium stone coal. The XRD pattern of the ore is shown in Figure 1. The main minerals include quartz, calcite, muscovite, and pyrite. The distribution of vanadium in the main minerals measured by an electron probe is shown in Table 2. Electron microprobe analysis showed that vanadium was not detected in calcite, pyrite, and quartz. The results of XRD and the electron probe analysis showed that vanadium is mainly present in muscovite.

In accordance with a certain proportion of weighed additives and crushed stone coal samples after mixing, grinding to −0.074 mm accounted for 71% of the powder. The resulting mixed sample was placed in a small crucible and roasted at a set temperature for a period of time in a muffle furnace. The resulting roasted product is transferred to a leaching pod containing a certain concentration of sulfuric acid solution, continued stirring, and leaching for a period of time. After the slurry is filtered, the solid and liquid are separated to obtain the leaching solution and leaching residue. The leaching solution was determined by titration with ammonium ferrous sulfate [17], and the leaching rate of vanadium was calculated by the following equation: where α is the leaching rate of vanadium (%), C is the concentration of vanadium in the acid leaching solution (g/mL), ω is the grade of vanadium in the raw ore (%),V is the volume of the acid leaching solution (mL), and m is the mass of the raw ore (g).
Chemical compositions of samples were determined by inductively-coupled plasma-atomic emission spectroscopy (ICP-AES, Optima-4300DV, PerkinElmer, Boston, MA, USA). Phase compositions of roasted clinker and ore samples were identified by X-ray diffractometer (D/MAX 2500PC, Rigaku, Tokyo, Japan) with Cu-Kα radiation. Microscopic observation and analysis of element distribution in samples were conducted by scanning using a JEOL JSM-6610 scan electronic microscope (JEOL, Tokyo, Japan) equipped with a Bruker QUANTAX200-30 (Bruker, Karlsruhe, Germany) energy dispersive spectrometer. The vanadium valences of the ore were measured on an automatic potentiometric titrimeter (model ZDJ-4A) using the ammonium ferrous sulfate method.

3.1.1. The Effect of the Proportion of Additives on the Leaching Rate of Vanadium

The effect of the CaF2/CaO mass ratio on the leaching rate of vanadium was investigated under the condition that the total amount of additive was 10 wt % and roasted at 850 °C for 90 min, a leaching temperature of 95 °C, a sulfuric acid concentration of 20% (v/v), a leaching time of 2 h, and a ratio of liquid to solid of 3 mL/g. The results shown in Figure 2. As can be seen from the Figure 2, with the additive ratio of CaF2 increased, vanadium leaching rate increased slowly. When the CaF2/CaO mass ratio was 2:3, the vanadium leaching rate tends to be gentle. Therefore, the optimum mass ratio of CaF2/CaO should be 2:3.

3.1.2. The Effect of the Total Amount of Additives on the Leaching Rate of Vanadium

3.1.3. The Effect of Temperature and Time on Leaching Rate of Vanadium

The XRD image and the chemical multi-elemental analysis of the raw ore of calcified roasted clinker at 850 °C for 90 min with CaF2/CaO with a mass ratio of 2:3 and total additive amount of 10 wt %, as well as blank roasted clinker without additives, under the same roasting conditions, are presented in Figure 6 and Table 3, respectively.
The muscovite, quartz, calcite, and pyrite of the main minerals were included in the raw ore. Figure 6b shows that, without any additives, with stone coal ore roasting at 850 °C, the roasted clinker obtained after 90 min still found mica diffraction peaks, while detecting gypsum, hematite, and quartz as well. This indicates that calcite has been decomposed after blank roasting, and pyrite was oxidized to hematite. Comparing Figure 6b with Figure 6c, a new compound phase microcline and anorthite appeared after roasting of the CaO and CaF2 containing ore. Meanwhile, the mica diffraction peak has disappeared, and the gypsum diffraction peak was enhanced. The results indicated that the mica structure was effectively destroyed during the roasting process, which provided the basis for the dissociation of vanadium. It can be seen from Table 2 that there was almost no loss of sulfur in the clinker from calcified roasting in comparison with the blank roasting. Additives played a role in sulfur fixation.
Figure 7 shows the valence distribution of vanadium in the raw ore, blank roasted clinker, and calcified roasted clinker. The V(III) is dominant, accounting for 62.97%; V(IV) accounted for 37.03%; and V(V) was not found in the raw ore. After blank roasting, V(III) disappeared, V(V) appears, while V(IV) accounted for a substantial increase. When the composite additive was added to the stone coal roasting, the proportion of V(V) was further improved. Vanadium valence analysis, combined with XRD analysis indicated that the addition of the additive can promote the process of ore decomposition and significantly increase the oxidation rate of V(V).
In order to further analyze the occurrence of V in roasted clinker, the roasted clinker is analyzed by EDS. The analysis results are shown in Figure 8.
It can be seen from Figure 8 that stone coal, after roasting, appeared porous. The results show that there is a good correlation between S, O, and Ca, and combined XRD analysis indicated that there was an anhydrite formation in this area. The correlation between V, Ca, and O is good, and the vanadate product formed during roasting of stone coal is mainly calcium vanadate [19,20]. It can be deduced that, after roasting, some of the V in the mineral mica structure is released to form calcium vanadate, which is easily dissolved in acid, so that this part of V can be dissolved into the liquid by acid.

The calcified roasted clinker can be obtained under the conditions of a CaF2/CaO mass ratio of 2:3 and a total additive amount of 10 wt %, a roasting temperature 850 °C, and roasting time 90 min. The vanadium leaching rate increased from 70.34% in the blank roasting to 86.74% in the calcified roasting under the conditions including leaching temperature of 95 °C, the sulfuric acid concentration of 15% (v/v), leaching time of 2 h, and ratio of liquid to solid of 3 mL/g. The use of composite additive CaF2/CaO in the extraction of vanadium from stone coal can enhance the roasting effect and improve the leaching rate of vanadium.
According to phase transformation analysis, the muscovite structure was effectively destroyed during the composite CaF2/CaO roasting process, which could provide the basis for vanadium dissociation and promote the formation of calcium vanadate. Moreover, the sulfur element in the stone coal is fixed in the form of gypsum during the roasting process, and additives played a role in sulfur fixation.
According to leaching kinetics analysis, the apparent activation energy of acid leaching reaction decreased from 42.50 KJ/mol in the blank roasting to 22.56 KJ/mol in the calcified roasting, and the reaction order with respect to the sulfuric concentration decreased from 1.15 to 0.85. Calcified roasting using the composite additive CaF2/CaO has a better mineral activation than blank roasting, which can accelerate the leaching of vanadium and reduce the dependence on high temperature and high acid in the leaching process. 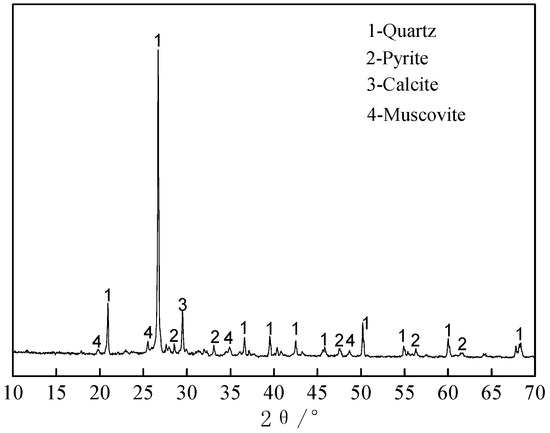 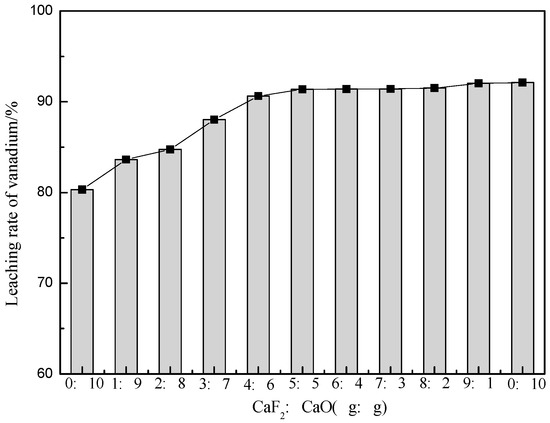 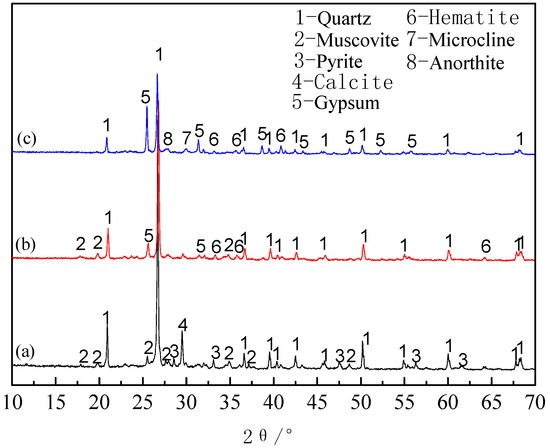 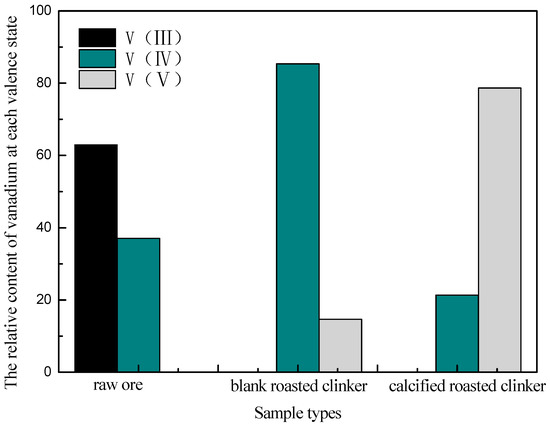 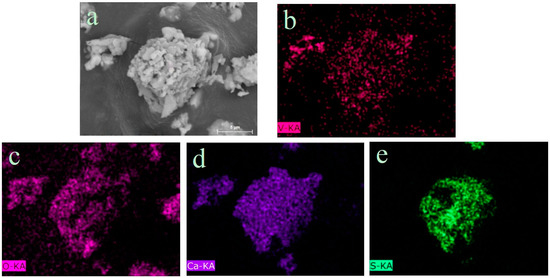 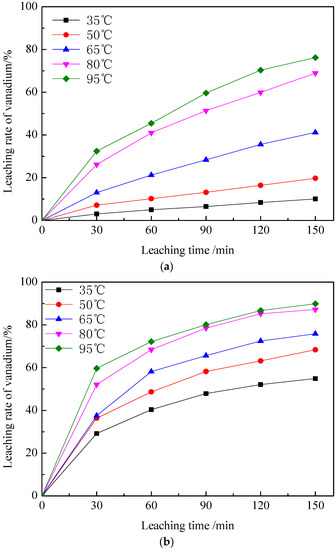 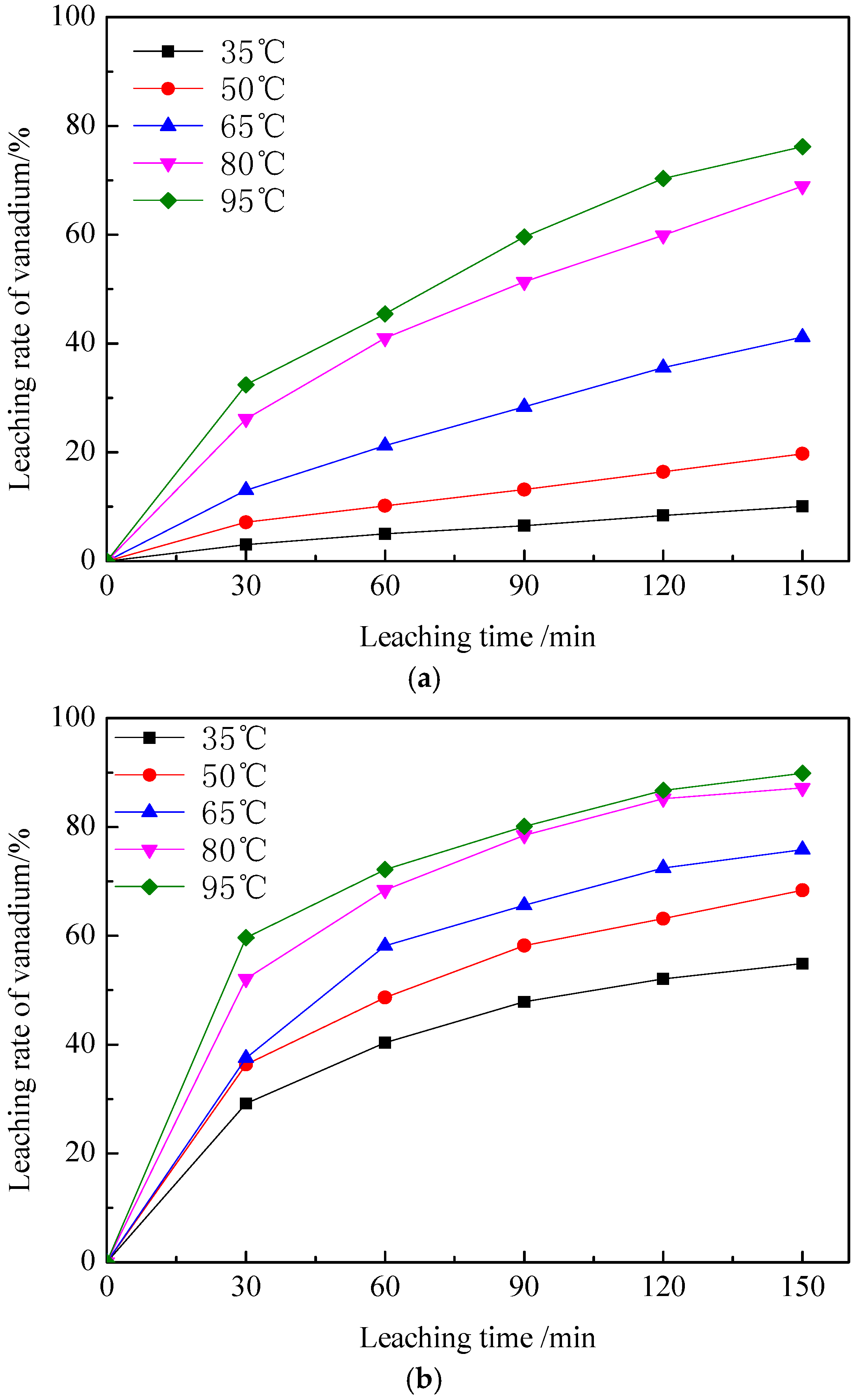 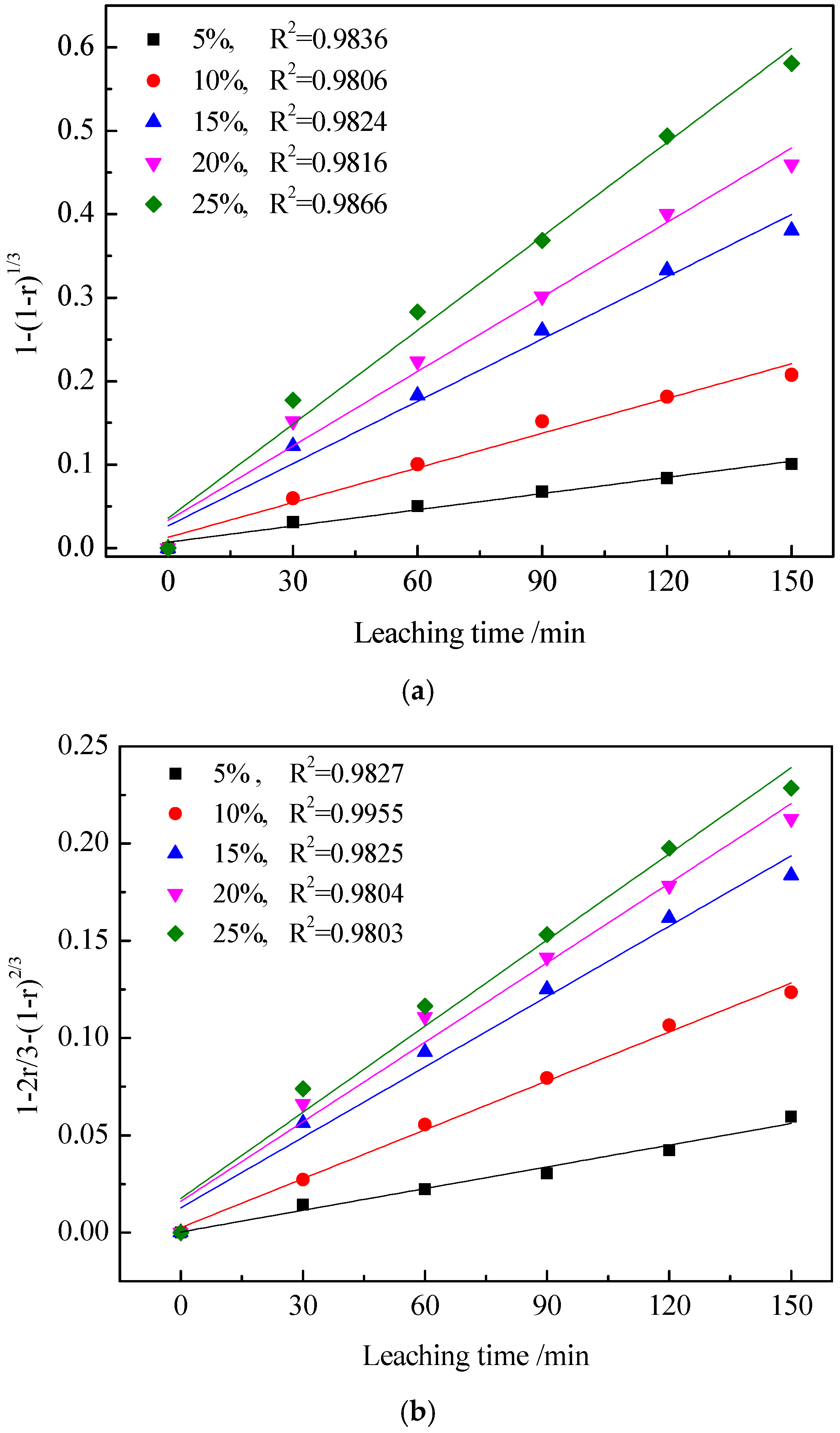 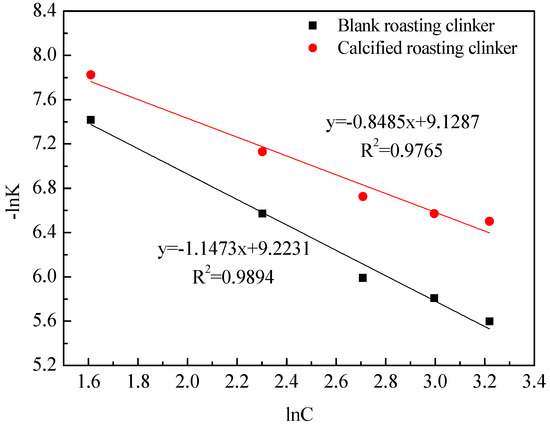