Advances and Opportunities in Ore Mineralogy
Next Article in Special Issue

Abundance, Distribution, and Modes of Occurrence of Uranium in Chinese Coals
Previous Article in Journal

Possible Involvement of Permian Phosphoria Formation Oil as a Source of REE and Other Metals Associated with Complex U-V Mineralization in the Northern Bighorn Basin?
Previous Article in Special Issue

Mid-Jurassic pyritic coals exposed at the village of Brora, northern Scotland, UK, contain a marked enrichment of tellurium (Te) relative to crustal mean, average world coal compositions and British Isles Carboniferous coals. The Te content of Brora coal pyrite is more than one order of magnitude higher than in sampled pyrite of Carboniferous coals. The Te enrichment coincides with selenium (Se) and mercury (Hg) enrichment in the rims of pyrite, and Se/Te is much lower than in pyrites of Carboniferous coals. Initial pyrite formation is attributed to early burial (syn-diagenesis), with incorporation of Te, Se, Hg and lead (Pb) during later pyrite formation. The source of Te may have been a local hydrothermal system which was responsible for alluvial gold (Au) in the region, with some Au in Brora headwaters occurring as tellurides. Anomalous Te is not ubiquitous in coal, but may occur locally, and is detectable by laser ablation inductively coupled plasma-mass spectrometry (LA-ICP-MS). View Full-Text
Keywords: tellurium; coal; pyrite; Jurassic; selenium tellurium; coal; pyrite; Jurassic; selenium
►▼ Show Figures 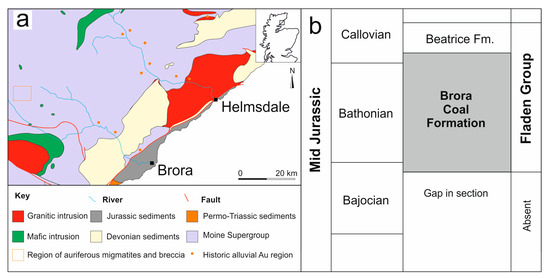