Toward the Operability of Flotation Systems under Uncertainty

:
The purpose of this work was to analyze the requirements for the operational feasibility of flotation systems as well as the effects of the selection of flotation equipment and metal price uncertainty. A procedure based on mathematical optimization and uncertainty analysis was implemented to achieve this aim. The optimization included flotation and grinding stages operating under uncertainty, whereas the uncertainty analysis considered the Monte Carlo method. The results obtained indicate a small number of optimal flotation structures from the economic point of view. Considering the relationship between the economic performance and metallurgical parameters, we established that these structures exhibited favorable conditions for operating under uncertainty. Such conditions were proportional to the percentages representing each structure in the optimal set; i.e., a higher percentage of a structure implied a greater capacity to face operational and metal price changes. The set of optimal structures included configurations implementing cell banks, flotation columns, or both, indicating the influence of the flotation equipment type on the optimal structures. We also established the influence of metal price on the number of optimal structures. Therefore, the results obtained allowed us to separate the design of the flotation systems into two stages: first, a set of optimal structures exhibiting favorable conditions for facing uncertainty is determined; second, the optimal operation is established via resilience/flexibility approaches after the previous determination of the equipment design parameters.
Keywords:
design; flotation systems; uncertainty analysis; selection of equipment; grinding

During the construction of a mathematical model, several aspects must be specified, including the type and structure of the model, parameters, resolution, and calibration data, among others. Each of these aspects has an associated uncertainty; i.e., an assumption generating uncertainty in the model responses. The uncertainty can be classified as either stochastic and epistemic [29,30,31]. The first is also referred to as variability, irreducible uncertainty, inherent uncertainty, or uncertainty due to chance. This type of uncertainty is related to variation, which is inherent to a given system, typically as a result of the random nature of model inputs, such as the feed grade and the metal price. The second is also referred to as reducible uncertainty, subjective uncertainty, or uncertainty due to lack of knowledge. This type of uncertainty as a resource of non-deterministic behavior derives from a lack of knowledge of the system or the environment, such as the recovery in flotation stages and the conversion in grinding. Both types of uncertainties can be modeled as random variables described by probability distributions.
The uncertainty analysis (UA) allows the uncertainty of the model responses as a result of the uncertainty of model inputs to be quantified. UA can be performed in four steps: first, the uncertainty of input variables must be described through probability distributions; second, samples are generated from the probability distributions via the Monte Carlo method; third, the values of the output variables for each element of the sample are determined; and fourth, the results are analyzed using descriptive statistics. The mathematical model subjected to UA was developed using a methodology based on mathematical programming, as described below.

A superstructure represents a set of structure alternatives where the optimal solution is sought. These structures can represent the equipment, tasks, or states. For example, equilibrium states were utilized in searching for the optimal structure for separation using fractional crystallization [32]. In contrast, Gálvez et al. [33] and Trujillo et al. [34] employed an equipment superstructure to represent superstructures for dewatering and heap leaching design, respectively. The nature of the flotation problem facilitates the use of equipment or stage superstructures to represent the configuration alternatives of the flotation systems. This approach considers the connection between the processing stages, mixers, and splitters. The processing stages include flotation and grinding; mixers are used to mix the feed entering to a processing stage, and splitters are used to send the flows of one stage to another. The connection between all stages implies the degeneration of the design problem; i.e., the appearance of illogical structures and/or defining the same structures two or more times. In this work, to avoid these degenerations, an origin–destination matrix was applied [16].

The optimization algorithms can be divided into exact and approximate methods [35]. In this work, exact methods were implemented to solve the design problem. These algorithms obtain an optimal solution and guarantee its optimality. Specifically, the algorithms implement the problem’s analytical properties to generate a sequence of points converging to a globally optimal solution. The related literature highlights several solvers to address the MILP model; for example, the CPLEX solver.

The methodology previously defined was applied to design structures for flotation systems and, consequently, to prove the hypotheses. Initially, the processed feed considered nine species, characterized by three main components: 9 t/h of chalcopyrite with 33% copper, 23 t/h of mixed mineral with 17% copper, and 350 t/h of gangue with 0% copper, where each of these main components includes three particle sizes. The superstructure implemented consisted of the following stages: Rougher (), Cleaner1 (), Cleaner2 (), Scavenger1 (), Scavenger2 (), Cleaner–Scavenger (), Regrinding1 (), and Regrinding2 (). The connections between the stages considered are described by the origin–destination matrix shown in Table 2. In Table 2, “x” and “o” represent tails and concentrate streams, respectively. For example, the concentrate from Cleaner1 can be sent to or become the product , whereas the tails can be sent to the stages , , , and .
In Table 2, the symbols and represent the final tail and final concentrate, respectively. The origin–destination matrix represents a total of 21,600 flotation circuit structures. There are 120 input variables of the mathematical model, of which 72 are related to flotation stages and 48 are connected to grinding stages. The variables exhibit epistemic uncertainty due to the insufficient quantity of information and, according to the principle of indifference, can be described using uniform distribution functions [30]. Table 3, Table 4 and Table 5 give the uniform distribution function for the flotation stage (Table 3) and grinding stages (Table 4 and Table 5). Here, the standard notation for the uniform distribution is utilized, which is X~U(a,b), where a and b are the lowest and highest values of x, respectively. The copper price exhibits stochastic uncertainty due to its unpredictable nature and according to [36] must be described by the uniform distribution function. Standard operational conditions of grinding and flotation stages were extracted from the works reported in Table 1. Subsequently, these values were used to define ranges of uncertainty in each process and for each mineralogical species. For example, the recovery of chalcopyrite ore with an average size exhibits a good recovery in the rougher stage. Thus, in this work, this was taken as being equal to 0.9. Based on this latter value, variations of was considered, obtaining the range shown in Table 3.

3.1. Uncertainty in Grinding and Flotation Stages, and the Selection of Equipment in the Recleaner Stage

3.2. Uncertainty in Regrinding and Flotation Stages and Selection of Equipment in Cleaner and Recleaner Stages 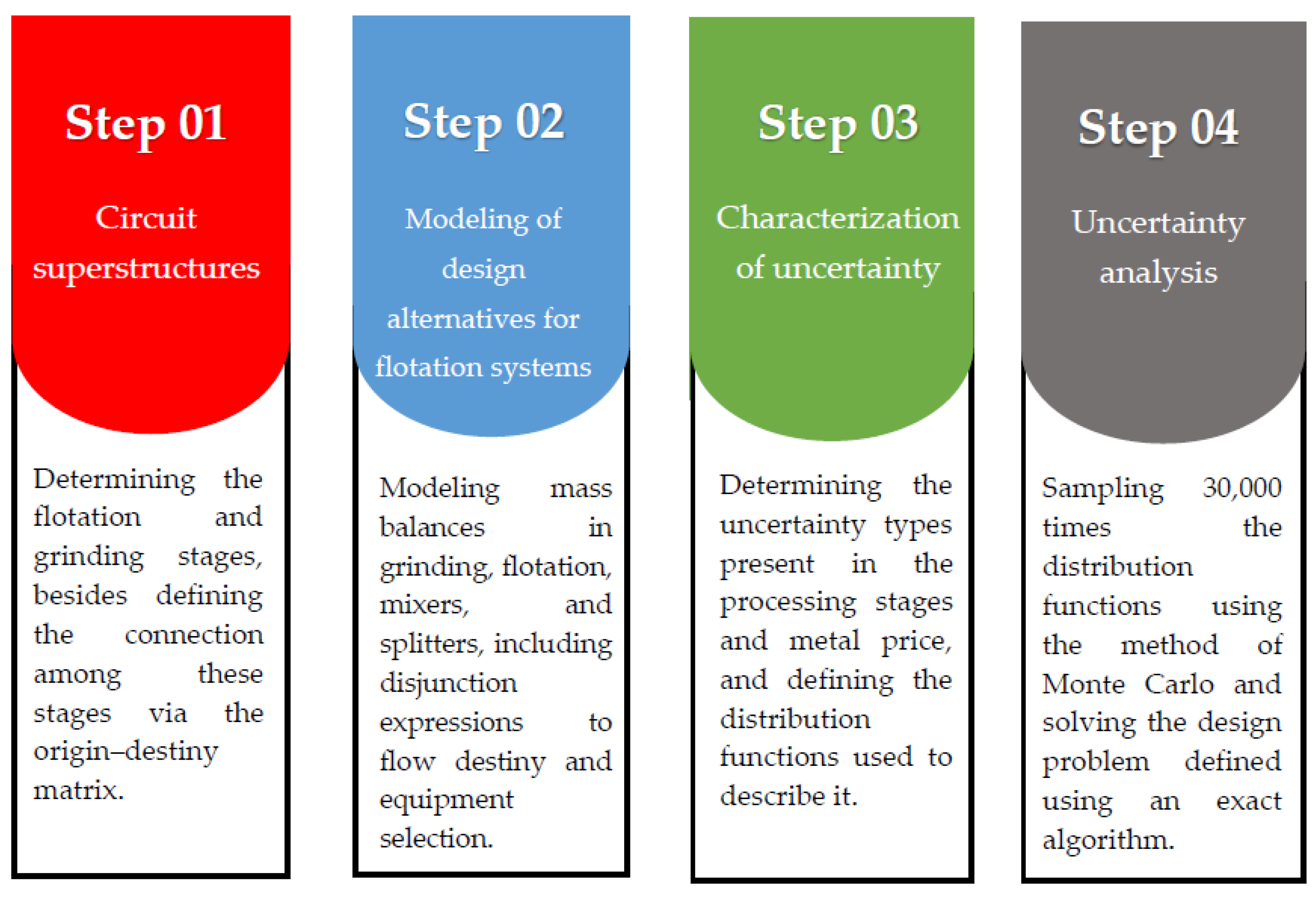 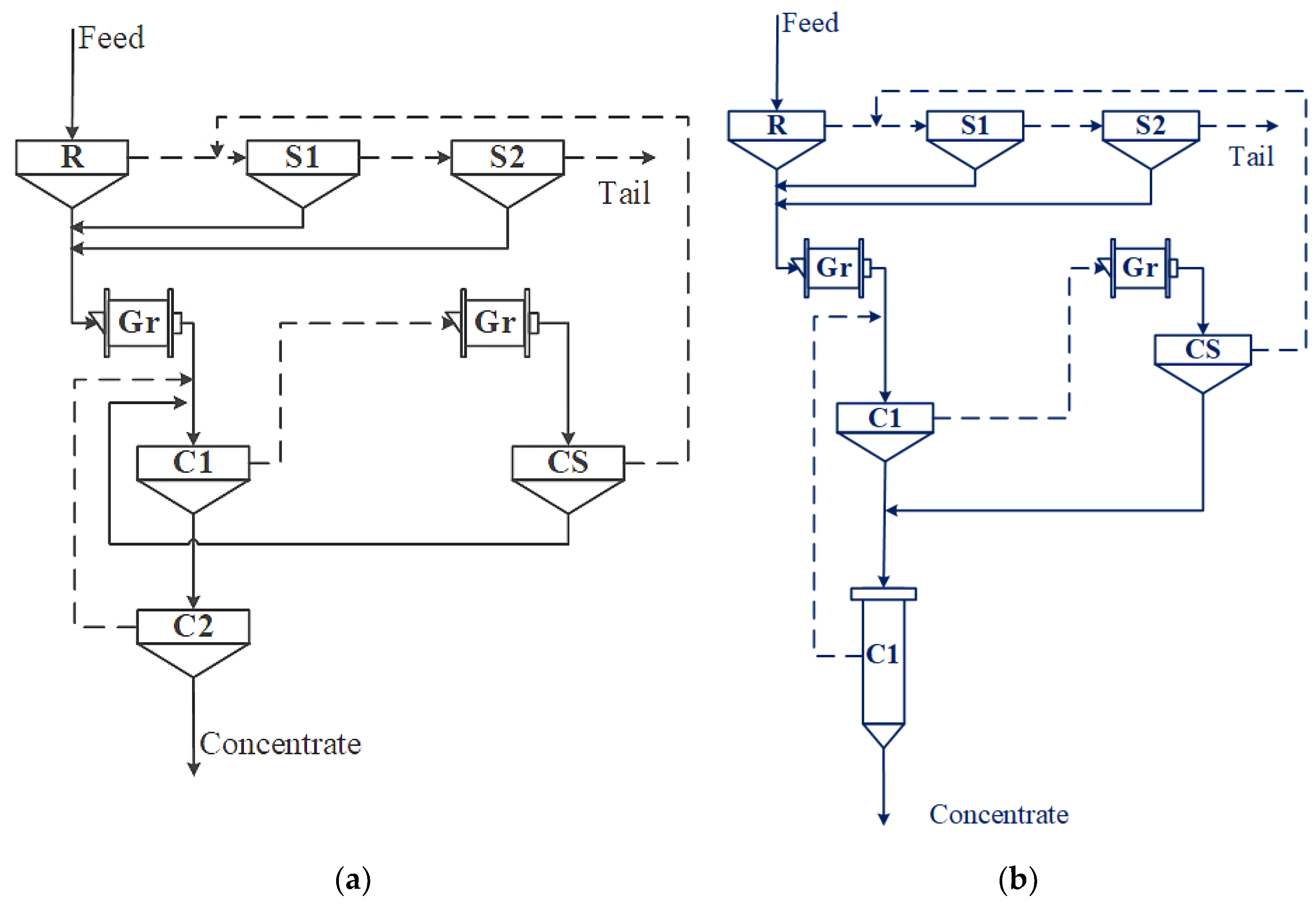 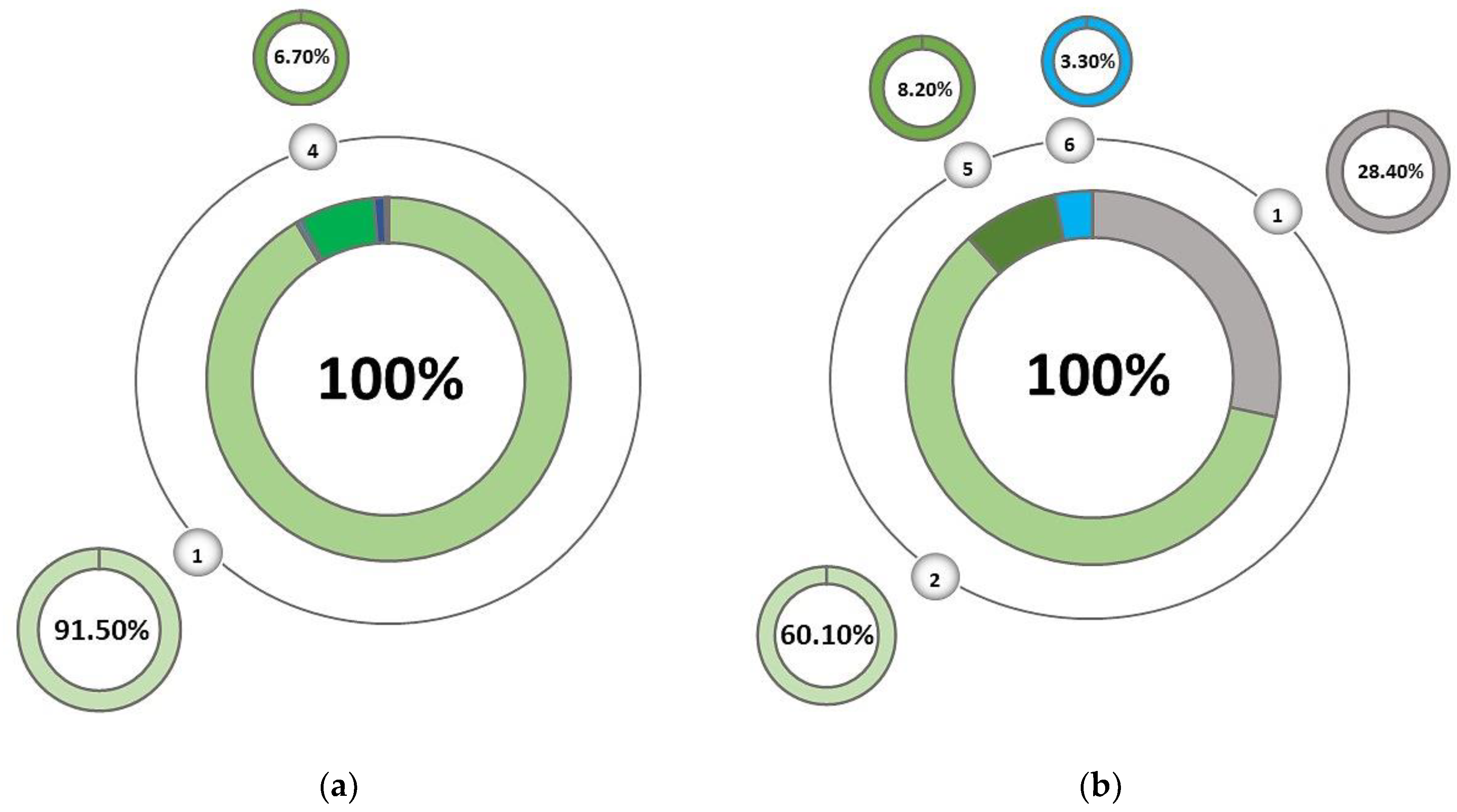 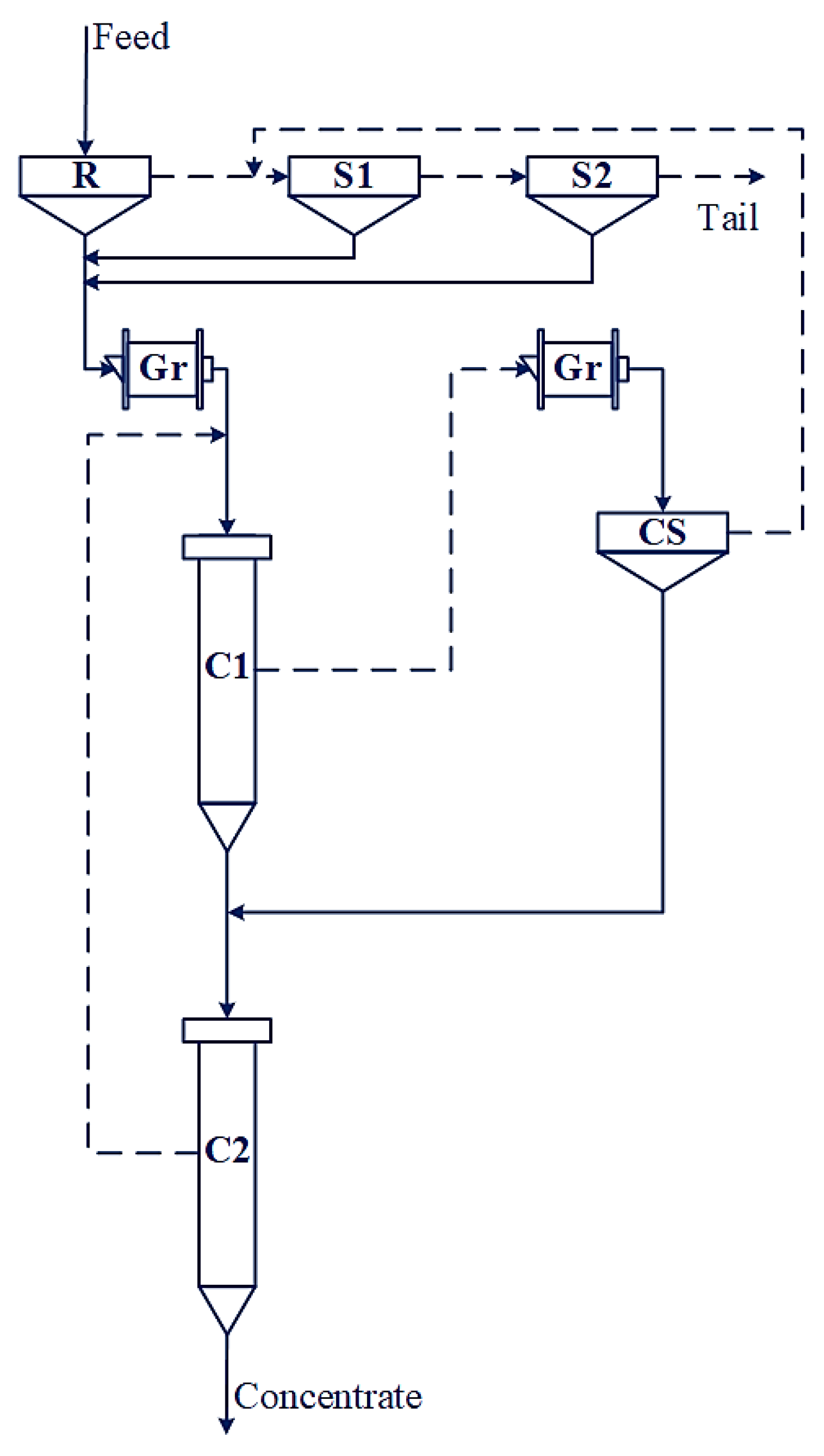 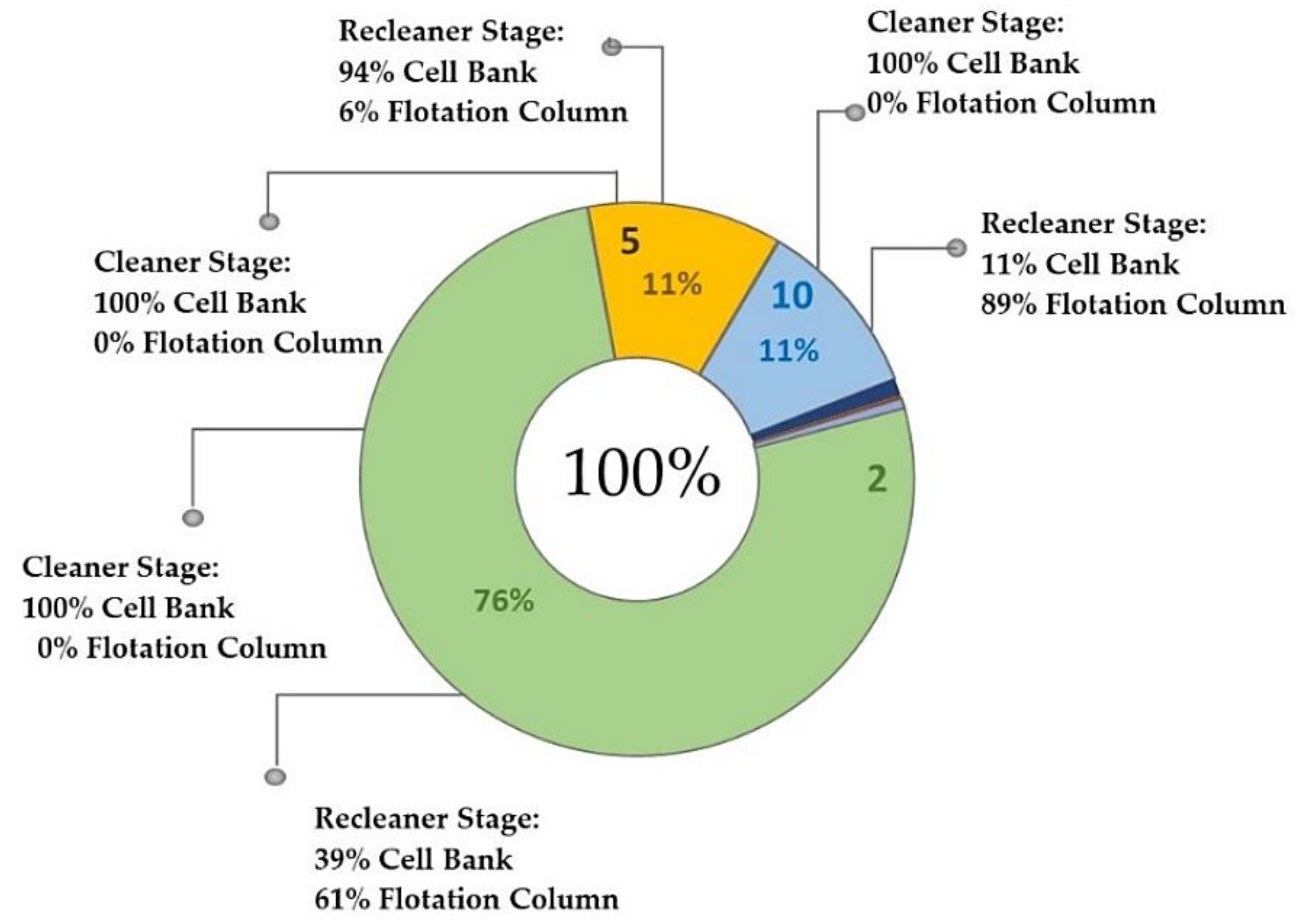