Eimear A. Deady
2 and

Approximately 300 million tonnes of bauxite are processed annually, primarily to extract alumina, and can contain moderate rare earth element (REE) concentrations, which are critical to a green energy future. Three bioleaching techniques (organic acid, reductive and oxidative) were tested on three karst bauxites using either Aspergillus sp. (organic acid bioleaching) or Acidithiobacillus ferrooxidans (reductive and oxidative bioleaching). Recovery was highest in relation to middle REE (generally Nd to Gd), with maximum recovery of individual REE between 26.2% and 62.8%, depending on the bauxite sample. REE recovery occurred at low pH (generally < 3), as a result of organic acids produced by Aspergillus sp. or sulphuric acid present in A. ferrooxidans growth media. Acid production was seen when A. ferrooxidans was present. However, a clear increase in REE recovery in the presence of A. ferrooxidans (compared to the control) was only seen with one bauxite sample (clay-rich) and only under oxidative conditions. The complex and varied nature of REE-bearing minerals in bauxite provides multiple targets for bioleaching, and although the majority of recoverable REE can be leached by organic and inorganic acids, there is potential for enhanced recovery by bioleaching. View Full-Text
Keywords: bioleaching; bauxite; rare earth elements; Turkey; Aspergillus sp.; acidophile; Acidithiobacillus ferrooxidans bioleaching; bauxite; rare earth elements; Turkey; Aspergillus sp.; acidophile; Acidithiobacillus ferrooxidans
►▼ Show Figures 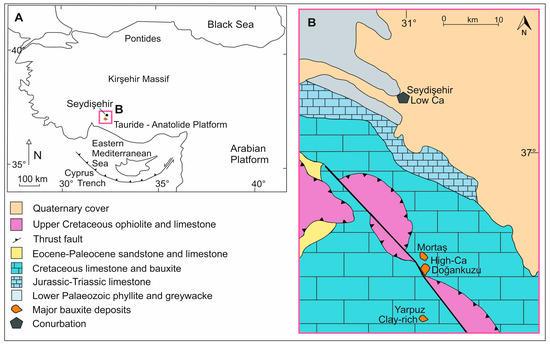