Water Content in Garnet from Eclogites: Implications for Water Cycle in Subduction Channels
Next Article in Special Issue

Fingerprints of Kamafugite-Like Magmas in Mesozoic Lamproites of the Aldan Shield: Evidence from Olivine and Olivine-Hosted Inclusions

Petrographical and Mineralogical Characteristics of Magmatic Rocks in the Northwestern Siberian Traps Province, Kulyumber River Valley. Part I: Rocks of the Khalil and Kaya Sites

The origin of the Siberian Traps province has been under discussion for the last three decades. Up to now, there is no real model of its formation in a good agreement with geological data on the magmatic evolution at P–T boundary in Eastern Siberia. Modern geochemical data on magmatic rocks around the province is a key to reconstructing magmatic development in time and space. Such data have been obtained for the Norilsk and Meimecha–Kotuy and not for other parts of the Siberian province. For the first time, we studied the geochemistry and mineralogy of magmatic rocks at the Kulyumber river valley, located in the intersection of the Tunguska syneclise and Norilsk–Igarka zone in the NW Siberian platform. In this article, we present data from the Khalil and Kaya sites of this area belonging to the Syverminsky, Gudchikhinsky, Khakanchansky and Nadezhdinsky formations. Their mineralogical and geochemical features (including Sr, Nd and Pb isotope data) are similar to the same formations in the Norilsk area, while the rocks belonging to the Gudchikhinsky formation show differences. The Syverminsky tuffs are also described for the first time. The intrusive rocks are attributed to four intrusive complexes, i.e., Ergalakhsky, Kureysky, Katangsky and Norilsk. The Ergalakhsky complex comprises trachydolerites similar to the trachydolerites of the Norilsk area. The rocks of the Norilsk complex at the Khalil site differ from the rocks of the same complex at the Norilsk area by the (U/Nb)n = 1.8, (La/Yb)n = 2.1 in comparison with 3.7 and 2.3 of the rocks of the Norilsk 1 intrusion. The intrusions of the Kureysky complex are more differentiated than those of the Katangsky intrusions but show comparable TiO2 and trace elements distribution. Thus, the magmatism of the Kulyumber area is characterized by features matching those of the Tunguska syneclise and Norilsk area, i.e., suggesting rift and platform regimes. View Full-Text
Keywords: geochemistry; Siberian traps; intrusions; volcanic rocks; r. Kulyumber; Norilsk area geochemistry; Siberian traps; intrusions; volcanic rocks; r. Kulyumber; Norilsk area
►▼ Show Figures 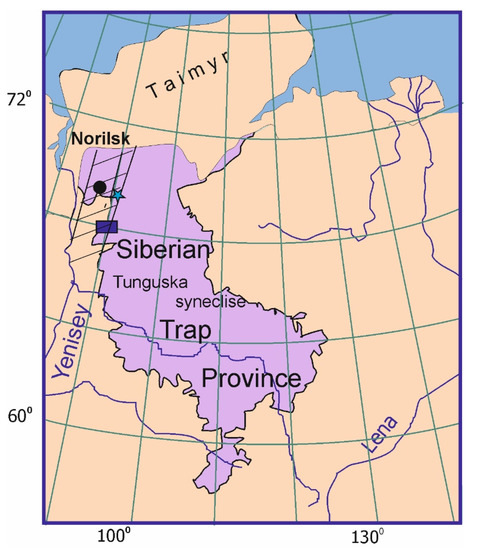