Smectitization as a Trigger of Bacterially Mediated Mn-Fe Micronodule Generation in Felsic Glass (Livno-Tomislavgrad Paleolake, Bosnia and Herzegovina)
Next Article in Special Issue

Modified Vermiculite as Adsorbent of Hexavalent Chromium in Aqueous Solution

Removal of Salicylic and Ibuprofen by Hexadecyltrimethylammonium-Modified Montmorillonite and Zeolite

The removal of salicylic acid (SA) and ibuprofen (IB) by sorption onto HDTMA-modified montmorillonite (HM) and zeolite (HZ) was investigated at pH 7. The single sorption data were fitted well by the Freundlich, Langmuir, Dubinin−Radushkevich (DR), and Polanyi−Dubinin−Manes (PDM) models (R2 > 0.94). The sorption affinity of Freundlich and the maximum sorption capacity of Langmuir and PDM models of pharmaceuticals onto HM were consistently higher than that of HZ mainly owing to the higher organic carbon content. In addition, the KF, qmL, and qm values were in the order of IB > SA owing to higher hydrophobicity and molar volume. Since the predominant speciation of SA and IB is anionic at pH 7 (>pKa), sorption onto HM occurs mainly by the two-dimensional surface adsorption onto the pseudo-organic medium in the HM, whereas the interaction of anionic pharmaceuticals with the positively charged “head” of HDTMA is responsible for HZ. Sorption isotherms were fitted well by the PDM model, which indicated that pore-filling was one of the dominating sorption mechanisms. The extended Langmuir model, modified Langmuir competitive model, and ideal adsorbed solution theory employed with Freundlich and Langmuir sorption models were applied to predict binary sorption. The effect of competition between the solutes was clearly evident in the characteristic curves; the maximum sorbed volume (qv.m) was reduced, and the sorbed volume (qv) had a wider distribution toward the sorption potential density. View Full-Text
Keywords: binary; HDTMA-montmorillonite; HDTMA-zeolite; pharmaceuticals; Polanyi theory; sorption binary; HDTMA-montmorillonite; HDTMA-zeolite; pharmaceuticals; Polanyi theory; sorption
►▼ Show Figures 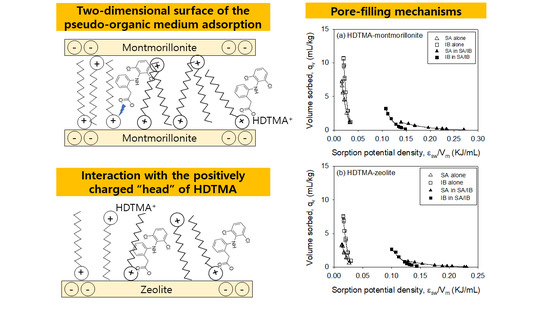