Domain Specificity in Human Symmetry Preferences: Symmetry is Most Pleasant When Looking at Human Faces

Visual symmetry has been found to be preferred to asymmetry in a variety of domains and across species. A number of theories propose to explain why symmetry is preferred. In this article, I compare a perceptual bias view, in which symmetry is preferred due to factors inherit to the visual system, and an evolutionary advantage view, in which symmetry is preferred due to selection pressures on partner preference. Preferences for symmetry in three stimulus types were determined by having symmetric and asymmetric versions of the same images rated for pleasantness: human female faces, macaque monkey faces, and abstract art. It was found that preferences for symmetry were strongest for human female faces and weakest for art. This finding builds on previous research suggesting that symmetry preferences for human faces are different from symmetry preferences in other domains and that simple perceptual bias explanations do not wholly explain human visual face symmetry preferences. While consistent with an evolutionary advantage view, these data are also potentially explainable via a perceptual bias view which accounts for experience of stimuli. The interplay between these two views is discussed in the context of the current study.
Keywords: symmetry; asymmetry; face preference; art; biological stimuli; specific; bias symmetry; asymmetry; face preference; art; biological stimuli; specific; bias

Human female images were photographs of white individuals (aged between 18 and 25) without spectacles. Photographs were taken under standardised lighting conditions and with participants posing with a neutral expression. Macaque images (all female) were taken under variable lighting conditions with neutral front-on images extracted from video recordings (see [28]). To equate size, human and macaque images were aligned to standardise the position of the pupils in the image.
To measure preferences for symmetry in human and macaque images, I used pairs of composite face images. The pairs comprised one symmetric and one asymmetric version of the same face (see Figure 1). Composite images, composed of multiple images of different individuals, were used as base faces (5 human and 5 macaque composite images, each made of 5 individual images). The composite images were made by creating an average image made up of 5 randomly assigned individual facial photographs (this technique has been used to create composite images in previous studies, see e.g., [44–46]). Images were made perfectly symmetrical in shape and then a transform applied. The transform applied was different for each image, representing the difference between an original human face image and its symmetrical counterpart. In this way the transform applied the asymmetry apparent in an original individual image. To approximately equate the asymmetry/symmetry difference between human and macaque stimuli, the asymmetries applied were based on the same human individual images. For example, symmetric human female composite face 1 and symmetric macaque female composite face 1 both had the asymmetry applied from the same individual human female face. A similar technique, though not using composites, has been used in previous studies [47]. This transform created two images, one symmetrical and one asymmetrical, for each base face. Images were then masked on the outline of the face so that hair and clothing/background cues were not visible in the image. Figure 1 shows an example of transformed faces made using these methods. Five freely available abstract art images were downloaded from [48]. Images were selected that had no obvious figure or pattern. For each image, it was randomly determined to make the image symmetrical based on combining one half image with the same half image using the left or right half of the image (i.e., symmetric versions were either the left half/left half or right half/right half). This created a symmetric and asymmetric version of each piece of art. Final images were 15 symmetric and 15 asymmetric paired images for a total of 30 images (10 human, 10 macaque, and 10 art images).

Participants were administered a short questionnaire assessing age and sex followed by the main test. Participants were told “In this study you will see human and monkey faces as well as modern art and asked to rate the images for pleasantness”. The main test consisted of individual images presented for rating for pleasantness on a 7-point scale (1 = low, 7 = high). Clicking a number moved participants on to the next trial. Image order was randomised and images remained on screen until participants selected a number. 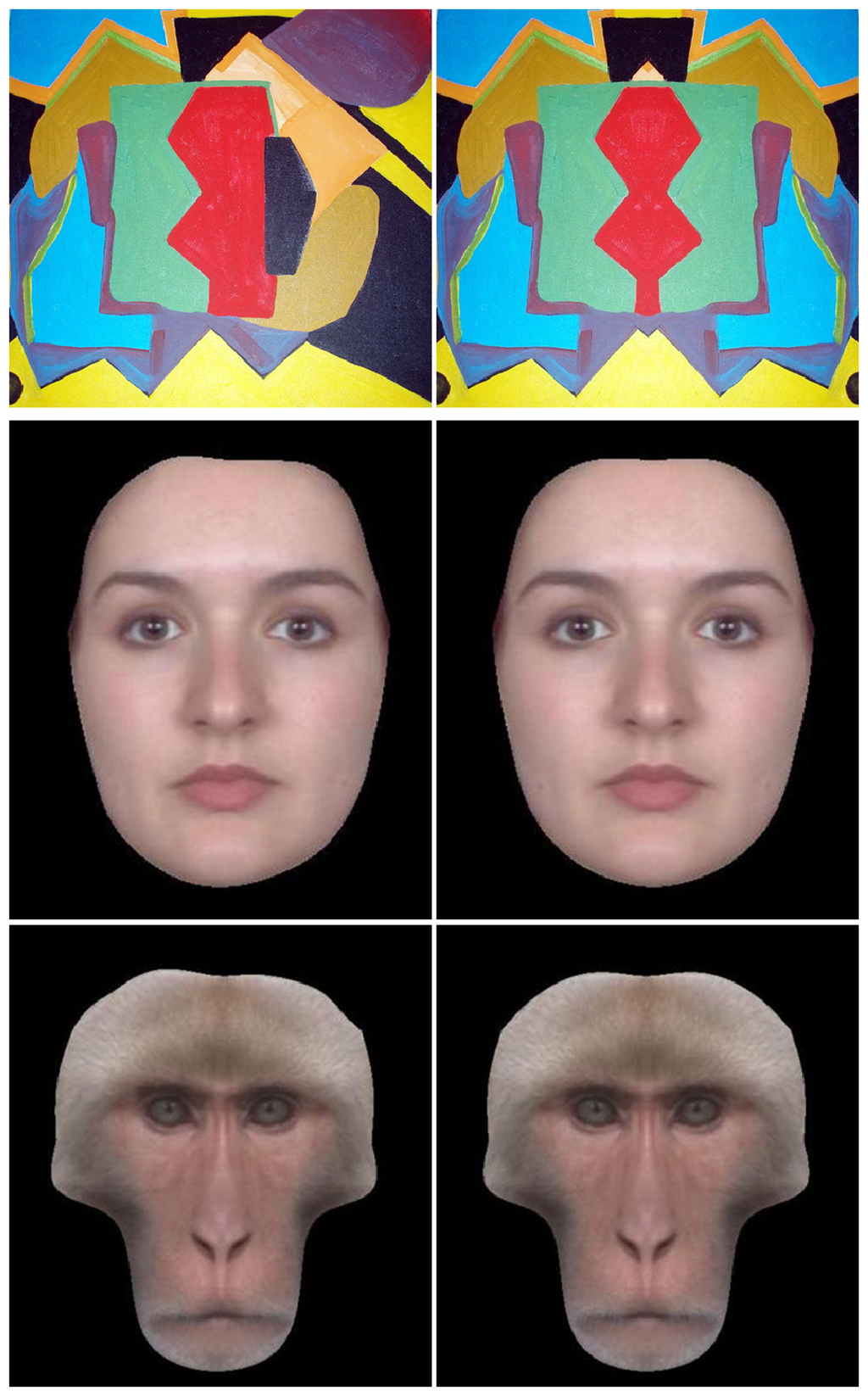 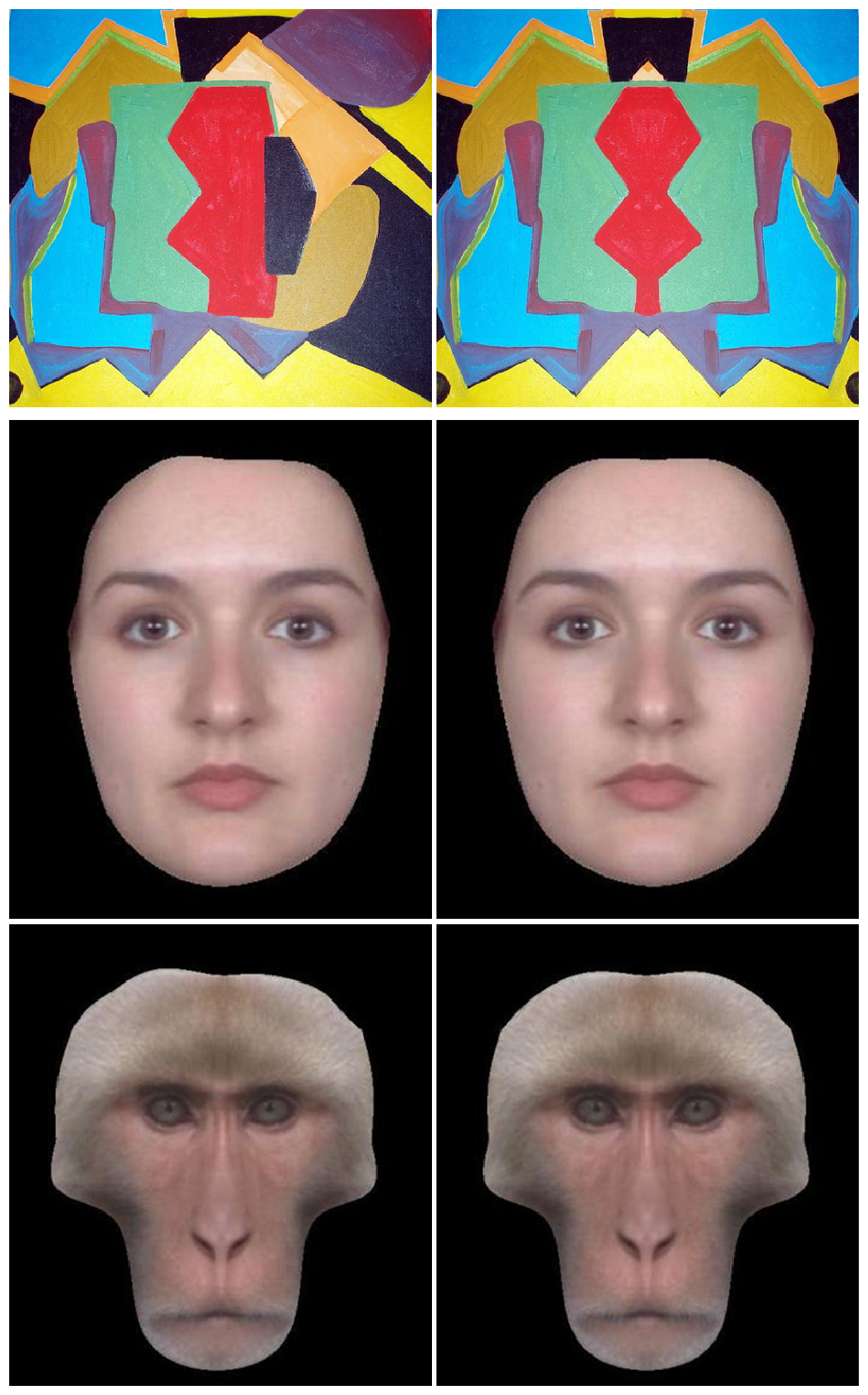 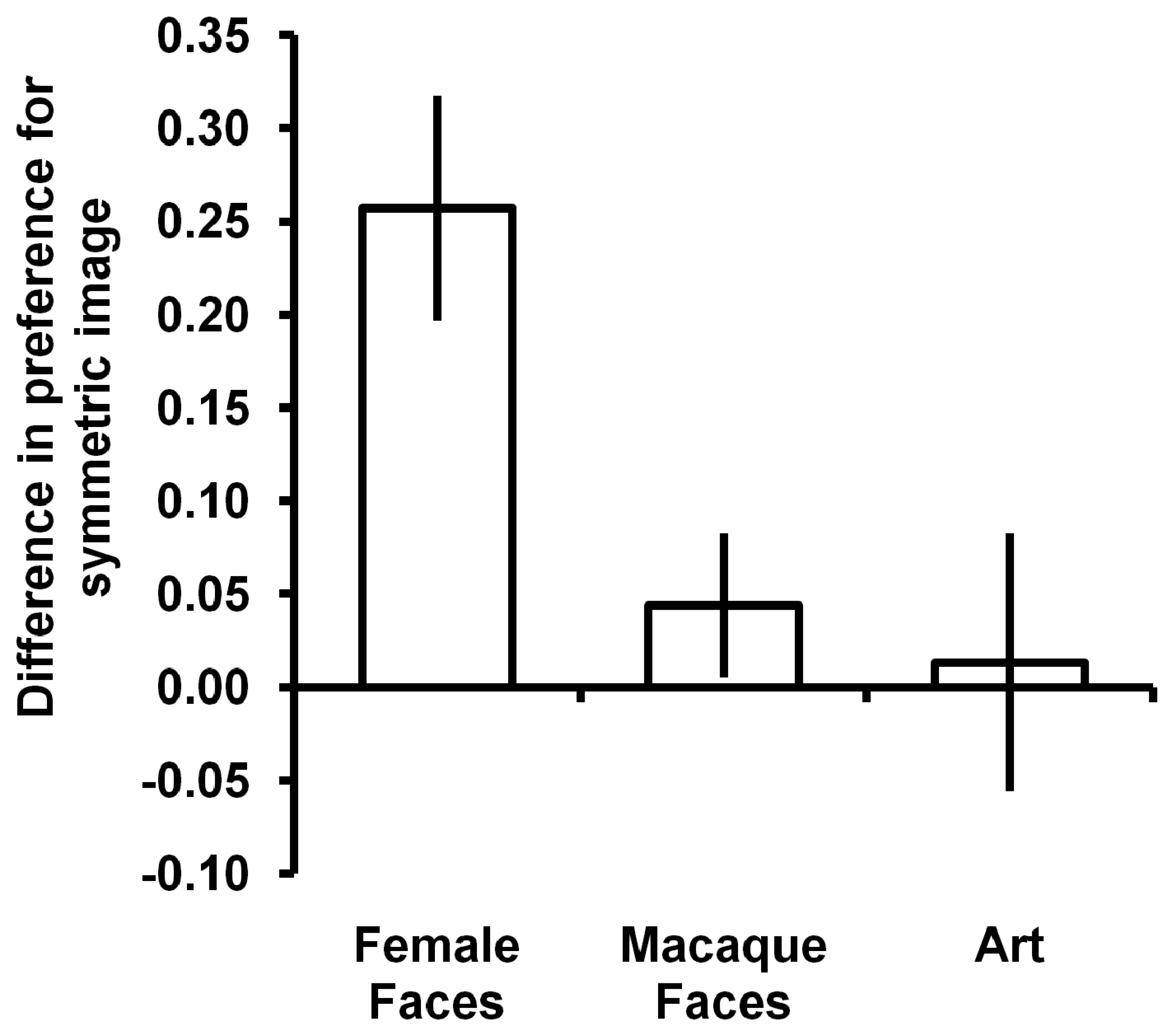