Flavor mixing between two or three neutrino flavors composed of up to three neutrino mass states [1] has been observed in experiments with solar, atmospheric, reactor, and accelerator neutrinos. The existence of a fourth neutrino has been proposed as a result of observations at the Liquid Scintillator Neutrino Detector (LSND) at Los Alamos National Laboratory, New Mexico and the Mini Booster Neutrino Experiment (MiniBooNE) at the Fermi National Accelerator Laboratory, Batavia, Illinois (see Section 14 in [1]). The fourth neutrino is referred to as the sterile neutrino because it is possible that the sterile neutrino only interacts with other matter through the gravitational interaction, while the electron, muon, and tau neutrinos are able to interact with matter through the weak and gravitational interactions. The MiniBooNE and LSND results are based on single detector studies of electron neutrino appearance in muon neutrino beams.
Aguilar-Arevalo, et al. [2] analyzed MiniBooNE and LSND data and found that analysis of the data by a two-neutrino oscillation model “would require at least four neutrino types and indicate physics beyond the three-neutrino paradigm.” By contrast, the MINOS+ collaboration [3] used long baseline neutrino detectors to search for sterile neutrinos in muon disappearance experiments. The MINOS+ collaboration did not find evidence of sterile neutrino mixing—consequently, the MINOS+ collaboration plans to improve the sensitivity of future analyses to set more stringent limits on mixing with sterile neutrinos.
Another way to analyze flavor mixing experiments has been proposed in the context of parametrized relativistic dynamics (PRD). For example, Fanchi presented PRD formalisms for studying neutrino flavor transitions associated with the mixing of two mass states [4] and the mixing of three mass states [5]. Neutrino oscillations are an example of two-state flavor mixing. Introductions to PRD are presented by Fanchi [6,7], Pavšič [8], and Horwitz [9]. The purpose of this paper is to present an extension of the PRD framework to neutrino flavor transitions associated with the mixing of four mass states.

It is possible to use more than one PRD approach to study transitions between flavor states. For example, we can study flavor transitions by assuming that they are induced when a system with discrete mass states interacts with a perturbation [10,11]. This approach is outlined in Section 2.1 to provide context for the more conventional technique presented in Section 2.2.

The scalar field equation for a perturbation analysis of transitions between flavor states due to a perturbing potential is for space-time coordinates and scalar evolution parameter . The operator is considered a mass operator. In this approach, is composed of operator , which is independent of s, and the perturbation which may depend on s. Equation (1) is equivalent to Equation (A3) with and
The perturbing interaction is required to be Hermitian so that subsequent matrix elements involving VI are real and therefore physically meaningful.
A perturbation solution for the state is obtained by writing the expansion for flavor states. Solutions of the unperturbed field equation are for {n = 1, 2, …, N}. The normalization condition on implies
The set of differential equations for the expansion coefficients is and the set of matrix elements of the perturbing potential is

The perturbation formalism presented in Section 2.1 can be used to construct a model of neutrino oscillations for flavor states. Rather than using the perturbation approach, a more conventional approach is to consider transitions between neutrino flavor states based on the assumption that neutrinos are composed of up to four mass states . The subscripts refer to electron, muon, tau, and sterile neutrinos respectively.
We begin by assuming that mass and flavor states can be written as 4-component column vectors: and
We assume that the mass basis is related to the flavor basis by a unitary transformation: where U is the unitary matrix satisfying
The elements of the unitary matrix are
The expanded form of the unitary transformation is
A mass basis state satisfies the temporal evolution equation where the eigenvalue of the temporal operator is , and is the scalar evolution parameter. In the standard theory, the eigenvalue of state j is the energy . By contrast, the eigenvalue in PRD is the eigenvalue of the mass operator for mass state . Equation (16) has the formal solution where all off-diagonal terms are zero and is mass state at .

The formalism presented in Section 2.2 is illustrated by applying it to the disappearance of electron neutrinos. Consider a pure beam of electron neutrinos in flavor state . The probability of transition from to for is
The matrix element is or, in expanded form,
Equation (20) is simplified by applying the orthonormality condition to obtain
The dependence on the temporal operator is obtained by writing the matrix element in Equation (21) at s = 0:

We demonstrate the applicability of the 4-flavor state-formalism by considering the oscillation in vacuum between electron neutrino and muon neutrino flavors. Transitions to tau neutrinos and sterile neutrinos are negligible in this application. The 4-state unitary matrix simplifies to where is the mixing angle between mass states 1 and 2 in vacuum. The resulting transition probability amplitude is where are the eigenvalues of the temporal evolution operator and
The evolution equation in PRD for state is where is the eigenvalue of the mass operator for mass state , is the mass of state , and is the energy-momentum of state . The solution of Equation (26) is where
In PRD, the components of are observables and the mass depends on statistical values of .
Substituting Equations (25) and (28) into Equation (24) gives and
The transition probability is
In the flavor oscillation process , we begin with a pure beam of electron neutrinos and calculate the probability of obtaining muon neutrinos. The probability of obtaining the final state from initial state is where is temporal duration measured by an evolution parameter clock (see Appendix A). Dynamical factors are collected in the term .
The most probable trajectory of the non-interacting s-clock particle traveling a distance in an interval is Equation (A11), namely
Substituting Equation (33) into Equation (32) gives
The result for the standard theory denoted by subscript is where is the energy of the ultrarelativistic incident neutrino
The probability of the electron neutrino surviving is in the PRD model, and in the standard Std model.
We combine Equations (34) and (36) and rearrange to simplify comparison with Equation (35):
The ratio of the dynamical factors is and the ratio of probabilities in Equations (35) and (39) is
The probabilities have the same dependence on the flavor mixing angle , but the dynamical factors are significantly different. We can estimate the ratio of dynamical factors by assuming the mass difference between neutrino mass and flavor states is very small and the neutrinos are ultrarelativistic. In this case, we obtain and so that .
Rusov and Vlasenko [12] used the difference between the standard and PRD models of two-state vacuum flavor mixing to conduct an experimental test of the two models. They estimated neutrino masses for the electron, muon, and tau neutrinos based on data for solar and atmospheric neutrinos. The neutrino masses were then used to estimate the diameter of a neutrino cloud and expressed a preference for PRD results. They concluded that neutrino oscillations indicate physics beyond the Standard Model. Furthermore, direct experimental measurement of neutrino mass can justify reconsideration of quantum theoretical issues and a “holistic understanding of the nature of physical reality” [12].

The APC was funded by the TCU Open Access Fund.

Appendix A. The Physical System 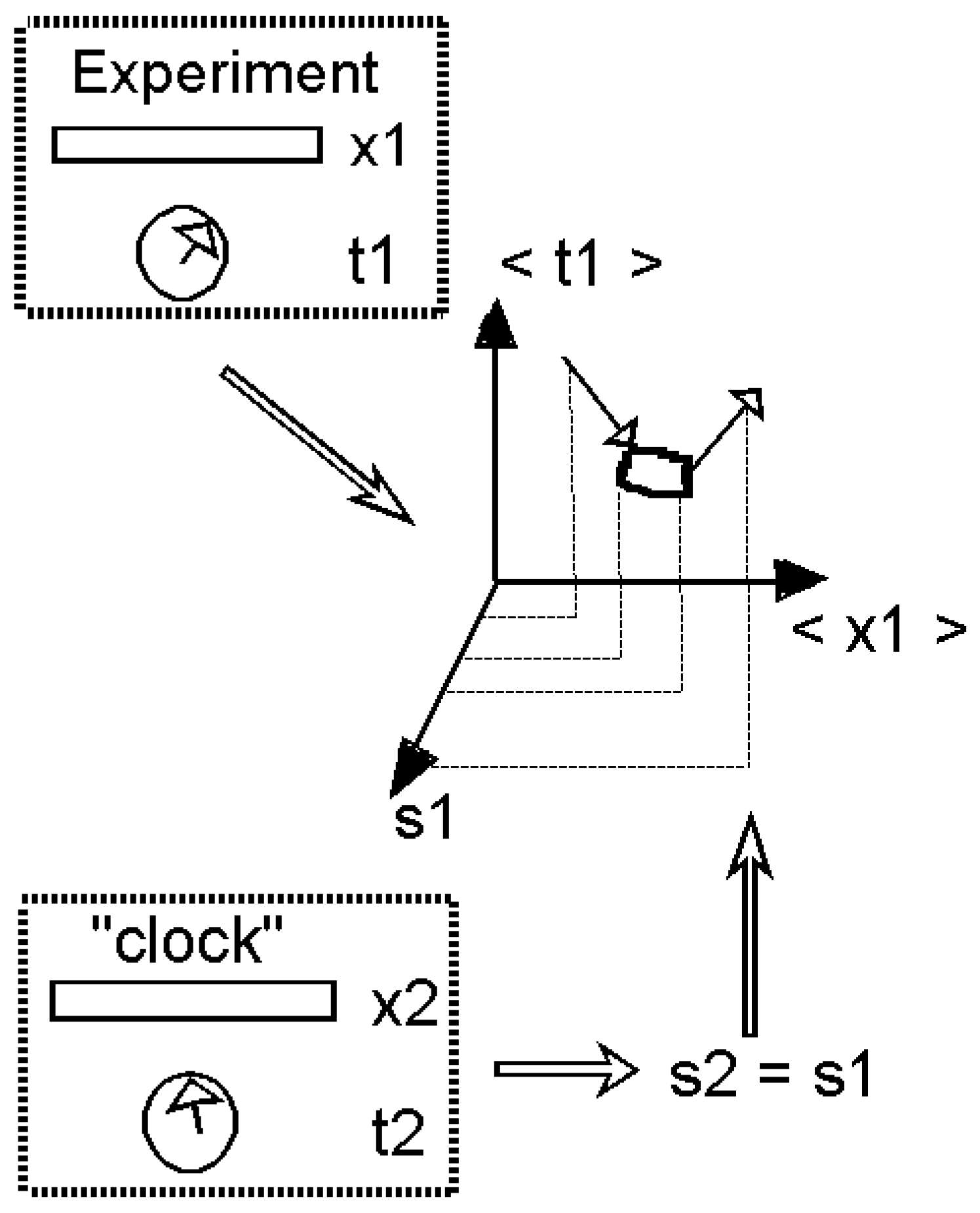 In our case here, the system of interest contains two particles. Particle 1 does not interact with particle 2 but can interact with other particles in the experimental system through an interaction potential . For simplicity, particle 2 is a free, scalar particle that serves as the evolution parameter clock (s-clock). We also make the assumption that the rest frame clocks of the two particles in our system are calibrated.
The Stueckelberg equation for the two-particle system is where s-dependent eigenfunction of the two-particle system applies to both particles 1 and 2. The eigenfunction has 4-space components . Writing as the product of single particle eigenfunctions and substituting Equation (A2) into Equation (A1) lets us separate Equation (A1) into two equations and with separation constant . We choose a system in which particles 1 and 2 are physically independent so that we can write .
Equation (A4) with is the free particle equation with the particular solution and normalization constant . The most probable trajectory of particle 2 in the classical limit of negligible dispersion is where is the scalar evolution parameter when the rest frame clocks of particles 1 and 2 were calibrated. We define the s-axis so that and Equation (A7) becomes
If we consider only linear motion for the free particle and neglect statistical variations, we obtain where , and
The distance traveled by particle 2 in the interval can be written as so that Equation (A9) becomes
We quantify the scalar evolution parameter by measuring the space-time trajectory of particle 2 and use the resulting value of in Equation (A3) associated with particle 1.