The double pendulum type gantry crane is a typical symmetry underactuated motion system. It has control problems in that the swing of the payload is difficult to suppress and the precise positioning of the trolley is not accurate. A new nonlinear coupling control method based on improved energy is proposed in this paper. We define coupled control signal among trolley, hook and payload. An improved energy storage function is established based on the new coupling control signal. Consequently, a nonlinear anti-swing controller is constructed straightforwardly, and the closed-loop system stability is subject to strict mathematics analysis by Lyapunov and LaSalle’ s theorem. Moreover, the new energy function based on the coupling behaving between the trolley motion and the payload swing leads to the improved control performance. Numerical simulation results show that the proposed method has better performance than traditional controllers. It not only effectively suppresses the swing of the load and the hook, but also precisely controls the displacement of the trolley. It has strong robustness to the displacement of the payload, the change of the gantry crane parameters and the external disturbance. View Full-Text
Keywords: symmetry underactuated gantry crane; double-pendulum; nonlinear control; Lyapunov techniques symmetry underactuated gantry crane; double-pendulum; nonlinear control; Lyapunov techniques
►▼ Show Figures 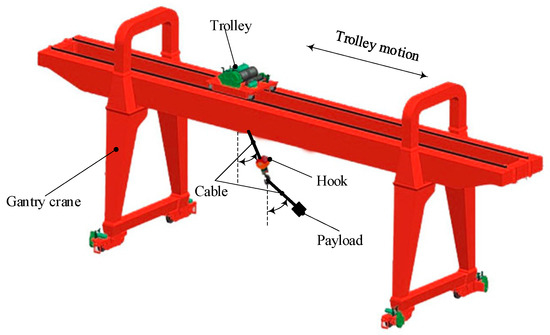