Characteristics of Soil Parameters of Agricultural Land Use Types, Their Location and Development Forecast

Agriculture in subarctic regions is limited by a short and cold growing season. With warming in the region, the number of growing days and, consequently, the potential for agricultural intensification and expansion may increase. However, subarctic soils are typically acidic, low in plant-available nutrients, and coarsely textured, so they require soil amendment prior to intensification. This is the case in South Greenland, where we tested the use of glacial rock flour (GRF) produced by glaciers as a soil amendment. An experiment was made on a farm in South Greenland during the 2019 summer to quantify the short-term effect of applying GRF to a field dominated by perennial timothy grass. Three treatments were compared to control sites (n = 5): 20 t GRF ha−1 without conventional NPK-fertilizer, as well as 20 and 40 t GRF ha−1 in combination with 25% NPK-fertilizer. The experiment showed no significant response in biomass production (aboveground and belowground) for the plots treated with GRF only. The low rate of GRF combined with 25% NKP showed a marked and significant increase in yield in contrast to a high GRF rate with NPK, which resulted in a significant reduction in yields. The chemical composition of the plants versus soil and GRF showed that the plant uptake of nutrients was significantly higher for NPK-fertilized plots, as expected, but no differences were found between GRF-treated plots and the control plots with respect to nutrient availability or pH in the soil. We conclude that adding water and fertilizer has the potential to increase yields in South Greenland, but applying glacial rock flour as a short-term agricultural supplement needs to be further investigated before it can be recommended. View Full-Text
Keywords: glacial rock flour; agriculture; intensification; South Greenland; yields; NPK fertilizer glacial rock flour; agriculture; intensification; South Greenland; yields; NPK fertilizer
►▼ Show Figures 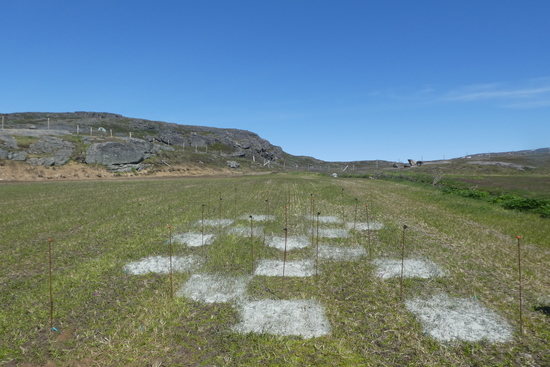