A Bottom-Up and Top-Down Participatory Approach to Planning and Designing Local Urban Development: Evidence from an Urban University Center

Public Perception of Wilderness in Iceland

In recent years, there has been a gradually growing emphasis on the protection of wilderness in Iceland. This is highlighted in the current preparation of a new national park in the Icelandic central highlands, which will become Europe’s largest national park. However, in order to protect the wilderness, a mutual understanding, both on what it is and where it is, is needed. This paper seeks to evaluate Icelanders’ perception and understanding of wilderness. Furthermore, to assess the value of wilderness for the Icelandic public and determine what lies behind the valuation, an online survey aided by maps from Google Earth and photographic scenarios of different landscapes was sent out to a nationally representative sample of Icelanders. The survey respondents mapped their perceived scope of Icelandic wilderness and furthermore chose between several landscape scenarios they thought most and least suited to their perception of wilderness. The results show that nearly all land located above the 300 m elevation line is perceived as wilderness, reflecting the country’s uninhabited highlands areas. The results also show that for the general public in Iceland it is chiefly an open and vast landscape, uninhabited areas, and the absence of anthropogenic features that bestow an area with the status of wilderness. The results demonstrate that any sign of anthropogenic interference, aside from archaeological remains, decrease Icelanders’ perception of wilderness. Moreover, despite being mostly categorized as urbanists or neutralists according to the purism scale, the majority of Icelanders still consider services, such as petrol stations, hotels, shops, restaurants, and diverse leisure services, along with energy production, to negatively impact the value of wilderness. Most Icelanders thus seem to regard wilderness as a valuable asset from the economic, cultural, and environmental perspectives, which underscores its uniqueness. View Full-Text
Keywords: wilderness; wilderness value; public perception; Iceland wilderness; wilderness value; public perception; Iceland
►▼ Show Figures 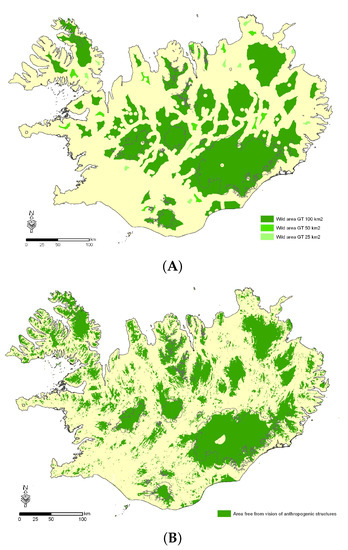