Power of Agricultural Credit in Farmland Abandonment: Evidence from Rural China
Next Article in Special Issue

Institutional Change on a Conservationist Frontier: Local Responses to a Grabbing Process in the Name of Environmental Protection
Previous Article in Special Issue

The planting of sand-binding vegetation in the Qinghai Lake watershed at the northeastern edge of the Qinghai–Tibet Plateau began in 1980. For this paper, we took the desert on the eastern shore of Qinghai Lake as the study area. We analyzed a variety of aged Hippophae rhamnoides communities and aeolian activities, and we discuss the relationship between them. The main conclusions are as follows: (1) With an increasing number of binding years, the species composition became more abundant, natural vegetation began to recover, and biodiversity increased year by year. At the same time, plant height, canopy width, and community coverage increased, but H. rhamnoides coverage was reduced to 36.70% as coverage of Artemisia desertorum increased to 25.67% after 10 years of fixing. The biomass of H. rhamnoides increased significantly, especially the underground biomass. For example, the biomass of area 15a was about 10 to 30 times that of area 1a. (2) Plants are a useful obstacle to aeolian activity. The presence of plants reduced the wind flow in the upper parts of the plants, but it did not have obvious regular characteristics. The longer the fixation term, the lower the surface sediment transport. It is significant that the sediment transport amount in winter was four times that in the summer. After 15 years of binding, H. rhamnoides grows well, and the community is still stable in the study area. View Full-Text
Keywords: desert around the Qinghai Lake; vegetation restoration; Hippophae rhamnoides; aeolian activities desert around the Qinghai Lake; vegetation restoration; Hippophae rhamnoides; aeolian activities
►▼ Show Figures 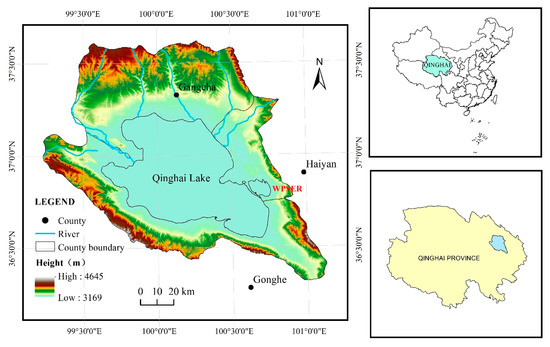