On Demand, Development and Dependence: A Review of Current and Future Implications of Socioeconomic Changes for Integrated Water Resource Management in the Okavango Catchment of Southern Africa
Previous Article in Journal

The Effectiveness of Conservation Reserves: Land Tenure Impacts upon Biodiversity across Extensive Natural Landscapes in the Tropical Savannahs of the Northern Territory, Australia

A consistent protocol for the survey of vertebrate fauna has been established in the Northern Territory over the period 1988 to the present [38], during which more than 5,000 quadrats have been sampled. Over the course of this systematic sampling, the selection of locations of quadrats was generally related to providing regional inventory, rather than the consideration on which the present study focuses.
Briefly, the sampling provides a measure of the abundance of frog, reptile, bird and mammal species over a 72 h period for a marked 50 m × 50 m quadrat (for mammals, reptiles and frogs), nestled within a 1 ha quadrat (for birds). For each individual species, the abundance measure was derived from live-trapping results (for frogs, reptiles and mammals; using 20 Elliott traps, four cage traps and two pitfall buckets) and timed searches (for birds—eight instantaneous counts; and for other taxa—three 10 min day-time searches and two 10 min spotlight searches at night).
A set of environmental variables was recorded for every quadrat, including basal area for all woody plant species, rock cover and a five-class scale (from 0 (no apparent impact) to 5 (severe impact)) for each of a range of disturbance variables (including weeds, pigs, fire and livestock or feral stock): see [39] for more details of scoring for these disturbance values. The average annual rainfall of every quadrat was estimated from modelled surfaces in ANUCLIM [40].
From the large collated data base of sampled quadrats, we selected all forest or woodland quadrats for which E. miniata and/or E. tetrodonta contributed at least 20% of the total woody basal area and which had not been grossly disturbed by clearing. This resulted in a selected set of 967 quadrats, widely spaced across the range of this forest type in the Northern Territory (Figure 1). The land tenure of each quadrat, at the time of sampling, was then identified by reference to cadastral mapping and information on land use and type recorded when sampled. The land tenure tallies of samples comprised 386 quadrats on Aboriginal lands, 487 on conservation reserves (including 14 different conservation reserves) and 94 on pastoral lands. Some (285) of these quadrats were on islands and, as such, location alone may influence biodiversity composition and conservation value [41]; we repeated all analyses with these island quadrats excluded.
Over the geographic and environmental range occupied by forests dominated by E. miniata and/or E. tetrodonta, fauna assemblages have previously been shown to vary with annual rainfall and rock cover [42,43,44], and so these variables were explicitly considered within analyses (see below). In this region, fauna assemblages may also vary with soil texture [44], but forests of E. miniata and/or E. tetrodonta grow on only a narrow range of textures (typically sandy-loams), so this variable was not considered in analysis. Given that our sampling spanned the period 1988-2008 and that this period coincided with a regional-scale decline in native mammals [45], we also included year within modelling.
For each quadrat, we tallied the species richness and total abundance of native frogs, reptiles, birds and mammals and the richness and total abundance of threatened species (as listed in [46]). Because of difficulties in consistent sampling, we do not include bats within our mammal tallies. 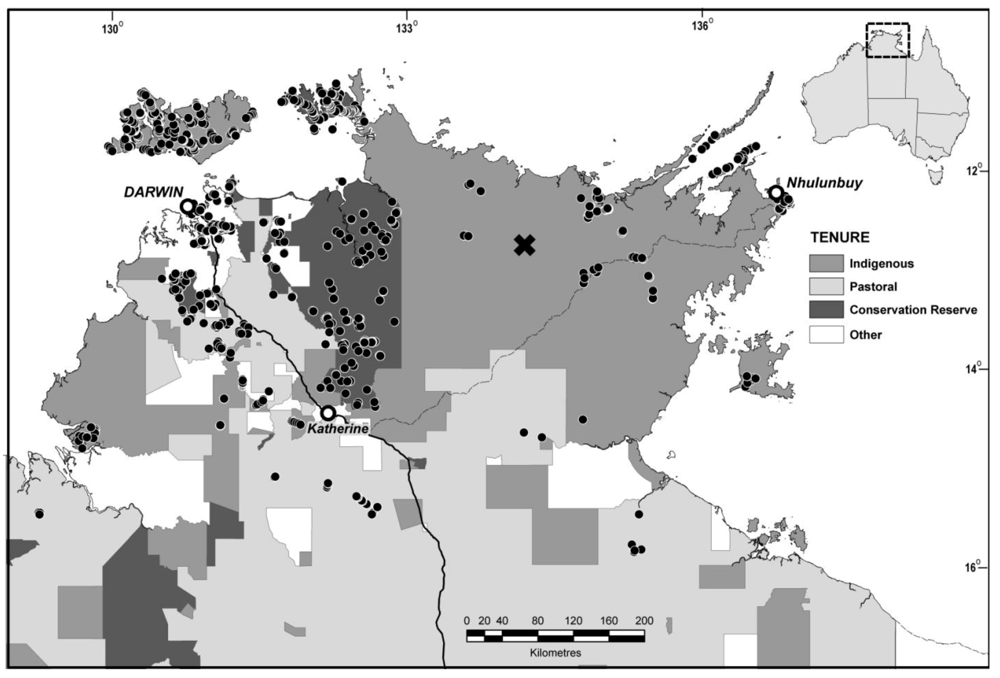 We estimated the relationship between land tenure and biodiversity using generalised linear models [47], where the species richness is modelled with a Poisson distribution. The count of species (y) observed was related to the covariates (x = land tenure, rainfall, rockiness, year), and we used this model to estimate coefficients (β- measures of effect) for n covariates:

We conducted this Poisson regression in log space to limit the estimates to positive values.
We conducted model averaging to parsimoniously estimate the effect of land tenure and other covariates (rock cover, rainfall and year), from the set of candidate models. Model averaging combines the coefficient estimates (β) according to their Akaike weight:

where L is the likelihood of the model, k is the number of parameters, Δi is the change in Akaike Information Criteria, wi is the Akaike weight for the model i and

is the model averaged estimate for a set of R models [48]. We conducted the Poisson regression, model averaging and predictions (except those previously mentioned) in program R [49].
We compared the level of disturbance recorded in quadrats of contrasting land tenure, using Kruskal-Wallis ANOVA, for impacts of fire, weeds, feral pigs and livestock (including feral and non-feral buffalo and cattle).

3. Results: Impacts of Land Tenure and Other Variables

For most of the fauna parameters considered, the model incorporating all four terms (rock cover, rainfall, land tenure and year) was overwhelmingly the best model (Table 1). There were two exceptions. For reptile species richness, no single model was particularly good, but the best model included only the terms rock cover and land tenure. For richness of threatened species, the best model contained the terms rainfall, land tenure and year. The direction of relationships with rainfall, rock cover and year varied between vertebrate groupings, and these relationships are not considered further here. For all but two vertebrate groupings, the land tenure relationship was consistent, with the highest value in conservation reserves. The exceptions were for mammal richness and amphibian richness, both of which were marginally higher in pastoral lands than in conservation reserves (Figure 2).
The exclusion of island quadrats did not change the terms included in any models or the direction of relationship or provide any substantial change in the explanatory power, and accordingly, the models excluding island quadrats are not presented here.

This study was funded in part by an Australia Research Council Linkage Grant (LP0455163). The data considered here derive from many years of fauna surveys undertaken by the Northern Territory Department of Natural Resources Environment The Arts and Sport, with many survey staff, but with particular mention of Martin Armstrong, Kym Brennan and Damian Milne. We thank Simon Davies, Kamil Barton and the R core team for statistical R functions. We thank Graham Phelps, Stephen Garnett, Peter Whitehead and three anonymous referees for their helpful comments. We thank very many landholders for permission to work on their lands.