Rapid urbanization development and construction has seriously threatened the connectivity of habitat patches in cities and hindered the construction of ecological networks in highly urbanized areas. Among them, China is affected by early compressed urbanization, and the broken ecological space in cities and towns has attracted the extensive interest of researchers. To avoid the subjective randomness and single analysis of ecological space in urbanization areas, this paper takes the central urban area of Wuhan as the main research area. It comprehensively evaluates the ecological network space by combining the MSPA-MCR model. The main conclusions are as follows: (1) Identifying the ecological landscape types with important ecological significance in the study area: Core (88.29%), Islet (0.25%), Perf (0.63%), Edge (9.74%), Loop (0.22%), and Bridge (0.14%). Through the dPC landscape index, seven important ecological sources south of the middle reaches of the Yangtze River were identified. (2) According to the comprehensive factors of natural and human factors constructed by the MCR model, the minimum cumulative ecological resistance surface was established, with an average value of 2.65, a maximum value of 4.70, and a minimum value of 1.00, showing a trend that the ecological resistance values in the central and eastern parts are lower than those in the western part. (3) According to the standard deviation ellipse, the distribution direction of NE–SW in ecological sources was analyzed. The ecological sources distributed in the north were less, and the spatial distribution was scattered on the whole. The strong global positive correlation and local spatial aggregation characteristics of ecological resistance surface were evaluated according to spatial autocorrelation. Based on the gravity model, the interaction intensity of ecological corridors between source areas was evaluated, and the importance of ecological corridor protection and restoration was quantitatively analyzed. The research results provide scientific and reasonable references and a basis for ecological planning of Wuhan central city. View Full-Text
Keywords: morphological spatial pattern analysis (MSPA); minimum cumulative resistance model (MCR); ecological network; ecological origin; ecological corridor morphological spatial pattern analysis (MSPA); minimum cumulative resistance model (MCR); ecological network; ecological origin; ecological corridor
►▼ Show Figures 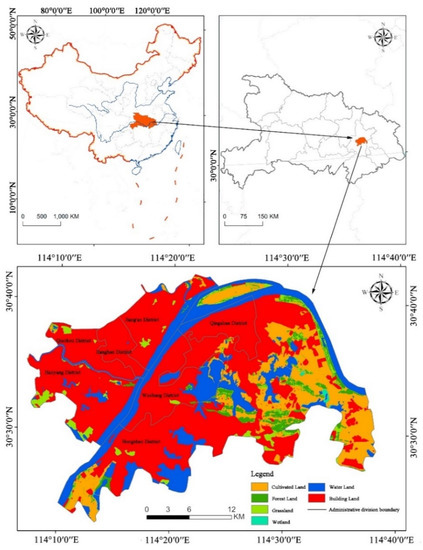