Hydrological Responses to Land Use Land Cover Changes in the Fincha’a Watershed, Ethiopia

Land use land cover (LULC) changes are highly pronounced in African countries, as they are characterized by an agriculture-based economy and a rapidly growing population. Understanding how land use/cover changes (LULCC) influence watershed hydrology will enable local governments and policymakers to formulate and implement effective and appropriate response strategies to minimize the undesirable effects of future land use/cover change or modification and sustain the local socio-economic situation. The hydrological response of the Ethiopia Fincha’a watershed to LULCC that happened during 25 years was investigated, comparing the situation in three reference years: 1994, 2004, and 2018. The information was derived from Landsat sensors, respectively Landsat 5 TM, Landsat 7 ETM, and Landsat 8 OLI/TIRS. The various LULC classes were derived via ArcGIS using a supervised classification system, and the accuracy assessment was done using confusion matrixes. For all the years investigated, the overall accuracies and the kappa coefficients were higher than 80%, with 2018 as the more accurate year. The analysis of LULCC revealed that forest decreased by 20.0% between the years 1994–2004, and it decreased by 11.8% in the following period 2004–2018. Such decline in areas covered by forest is correlated to an expansion of cultivated land by 16.4% and 10.81%, respectively. After having evaluated the LULCC at the basin scale, the watershed was divided into 18 sub-watersheds, which contained 176 hydrologic response units (HRUs), having a specific LULC. Accounting for such a detailed subdivision of the Fincha’a watershed, the SWAT model was firstly calibrated and validated on past data, and then applied to infer information on the hydrological response of each HRU on LULCC. The modelling results pointed out a general increase of average water flow, both during dry and wet periods, as a consequence of a shift of land coverage from forest and grass towards settlements and build-up areas. The present analysis pointed out the need of accounting for past and future LULCC in modelling the hydrological responses of rivers at the watershed scale. View Full-Text
Keywords: Africa; Ethiopia; landsat; land use land cover changes; remote sensing; SWAT model Africa; Ethiopia; landsat; land use land cover changes; remote sensing; SWAT model
►▼ Show Figures 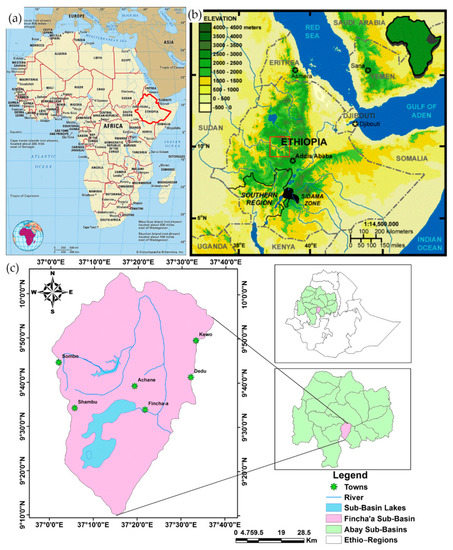