Can China’s Resource-Saving and Environmentally Friendly Society Really Improve the Efficiency of Industrial Land Use?

As coastal land use intensifies and sea levels rise, the fate of coastal forests becomes increasingly uncertain. Synergistic anthropogenic and natural pressures affect the extent and function of coastal forests, threatening valuable ecosystem services such as carbon sequestration and storage. Quantifying the drivers of coastal forest degradation is requisite to effective and targeted adaptation and management. However, disentangling the drivers and their relative contributions at a landscape scale is difficult, due to spatial dependencies and nonstationarity in the socio-spatial processes causing degradation. We used nonspatial and spatial regression approaches to quantify the relative contributions of sea level rise, natural disturbances, and land use activities on coastal forest degradation, as measured by decadal aboveground carbon declines. We measured aboveground carbon declines using time-series analysis of satellite and light detection and ranging (LiDAR) imagery between 2001 and 2014 in a low-lying coastal region experiencing synergistic natural and anthropogenic pressures. We used nonspatial (ordinary least squares regression–OLS) and spatial (geographically weighted regression–GWR) models to quantify relationships between drivers and aboveground carbon declines. Using locally specific parameter estimates from GWR, we predicted potential future carbon declines under sea level rise inundation scenarios. From both the spatial and nonspatial regression models, we found that land use activities and natural disturbances had the highest measures of relative importance (together representing 94% of the model’s explanatory power), explaining more variation in carbon declines than sea level rise metrics such as salinity and distance to the estuarine shoreline. However, through the spatial regression approach, we found spatial heterogeneity in the relative contributions to carbon declines, with sea level rise metrics contributing more to carbon declines closer to the shore. Overlaying our aboveground carbon maps with sea level rise inundation models we found associated losses in total aboveground carbon, measured in teragrams of carbon (TgC), ranged from 2.9 ± 0.1 TgC (for a 0.3 m rise in sea level) to 8.6 ± 0.3 TgC (1.8 m rise). Our predictions indicated that on the remaining non-inundated landscape, potential carbon declines increased from 29% to 32% between a 0.3 and 1.8 m rise in sea level. By accounting for spatial nonstationarity in our drivers, we provide information on site-specific relationships at a regional scale, allowing for more targeted management planning and intervention. Accordingly, our regional-scale assessment can inform policy, planning, and adaptation solutions for more effective and targeted management of valuable coastal forests. View Full-Text
Keywords: aboveground carbon storage; coastal forests; light detection and ranging (LiDAR); remote sensing; satellite imagery; sea level rise aboveground carbon storage; coastal forests; light detection and ranging (LiDAR); remote sensing; satellite imagery; sea level rise
►▼ Show Figures 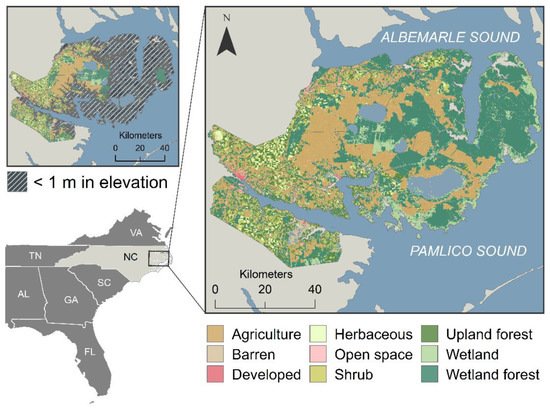