Public Perceptions on City Landscaping during the Outbreak of Coronavirus Disease: The Case of Vilnius Pop-Up Beach, Lithuania
Previous Article in Special Issue

Crop Boom as a Trigger of Smallholder Livelihood and Land Use Transformations: The Case of Coffee Production in the Northern Mountain Region of Vietnam

Changes in the cultural landscape provide essential evidence about the manner and intensity of the interactions between humans and nature. Czechia has a specific location in Central Europe. It is positioned at the crossroads of European landscape changes. These changes can be documented based on a unique database that shows the development of land use since the middle of the 19th century. In this study, we aimed to address the major processes of landscape change that occurred during four periods over the past 165 years, at the cadastral level on the territory of present-day Czechia. Further we identify and discuss proximate and underlying driving forces of the landscape changes. We used land use data from the year 1845, 1896, 1948, 1990, and 2010 that correspond to key events in Czech history. The major processes and intensity of landscape change were evaluated based on calculations of increases and decreases in land use classes between the first and last year of each examined period. The period 1845–1896 was the only period in which arable land increased, and the most recent period, 1990–2010, was the only period during which a grassing over process was recorded. Afforestation was recorded in all periods. The communist period was characterized by unified changes—urbanization, afforestation, arable land decrease, and landscape devastation. The post-communist period was, in some respects, beneficial to the landscape (e.g., grassing over and afforestation, particularly in mountain areas), but it also led to negative processes, such as strong urbanization and land abandonment. Such changes lead to landscape polarization. The landscape changes in Czechia during the period 1845–2010 reflect many important historical events in Europe. In our analysis, we demonstrate the essential impact of underlying drivers and also identify driving forces specific to the development of the Czech territory. View Full-Text
Keywords: processes of landscape change; 1845–2010; proximate driving forces; underlying driving forces; Czechia processes of landscape change; 1845–2010; proximate driving forces; underlying driving forces; Czechia
►▼ Show Figures 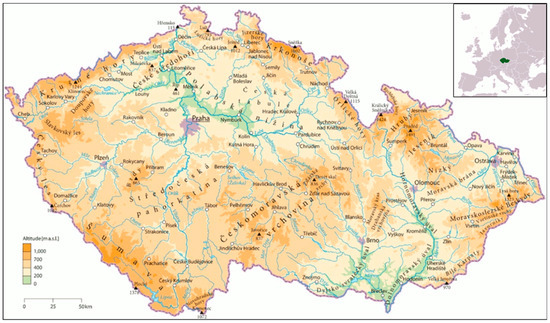