Information on riverine phosphorus (P) dynamics during typhoon storm events remains scarce in subtropical regions. Thus, this study investigates the spatial and temporal dynamics of riverine phosphorus in a headwater catchment during three typhoon events. Continuous sampling (3 h intervals) of stormwater samples and discharge data were conducted at five locations, which represent the upstream, transitional zone, and downstream areas of the main inflow river. The results revealed that the average event mean concentrations (EMCs) for total dissolved phosphorus (TDP) and particulate phosphorus (PP) in the upstream catchment of Fei-Tsui reservoir were 15.66 μg/L and 11.94 μg/L, respectively. There was at least a 1.3-fold increase in flow-weighted concentrations of TDP and PP from the upper to lower reaches of the main stream. PP and TDP were transported either in clockwise or anticlockwise directions, depending on storm intensity and source. The transport of TDP was primarily regulated by the subsurface flow during the storm event. Soluble reactive phosphorus (SRP) contributes more than 50% of the TDP load in moderate storms, while extreme storms supply a greater dissolved organic phosphorus (DOP) load into the stream. TDP accounted for approximately 50% of TP load during typhoon storms. Mobilization of all P forms was observed from upstream to downstream of the river, except for DOP. A decrease of DOP load on passing downstream may reflect the change in phosphorus form along the river continuum. Peak discharge and antecedent dry days are correlated positively with P fluxes, indicating that river bank erosion and re-suspension of within-channel sediment are the dominant pathways of P during typhoon storm periods. View Full-Text
Keywords: hysteresis; phosphorus dynamics; spatial scales; storm runoff; typhoon storm hysteresis; phosphorus dynamics; spatial scales; storm runoff; typhoon storm
►▼ Show Figures 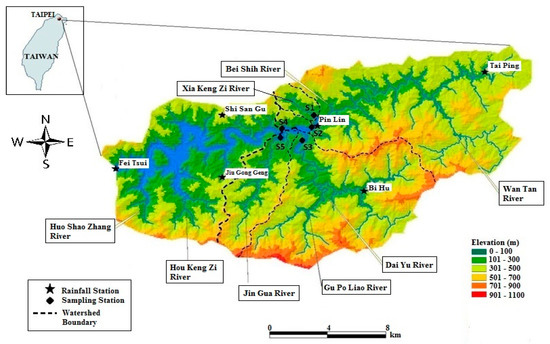