:
Multiple lines of observational evidence indicate that the global climate has been getting warmer since the early 20th century. This warmer climate has led to a global mean sea level rise of about 18 cm during the 20th century, and over 6 cm for the first 15 years of the 21st century. Regionally the sea level rise is not uniform due in large part to internal climate variability. To better serve the community, the uncertainties of predicting/projecting regional sea level changes associated with internal climate variability need to be quantified. Previous research on this topic has used single-model large ensembles with perturbed atmospheric initial conditions (ICs). Here we compare uncertainties associated with perturbing ICs in just the atmosphere and just the ocean using a state-of-the-art coupled climate model. We find that by perturbing the oceanic ICs, the uncertainties in regional sea level changes increase compared to those with perturbed atmospheric ICs. Thus, in order for us to better assess the full spectrum of the impacts of such internal climate variability on regional and global sea level rise, approaches that involve perturbing both atmospheric and oceanic initial conditions are necessary.
Keywords:
sea level rise; ensemble simulation; climate change

Observations indicate that since the mid-20th century, ocean heat content is increasing [1,2], ice caps and mountain glaciers are retreating [3,4,5], and the Greenland and Antarctic ice sheets are losing mass [6,7,8,9,10,11,12]. As the ocean becomes warmer, seawater expands, leading to a thermal steric sea level rise. The changes of the air-sea interaction in terms of evaporation and precipitation over the ocean and the changes of ocean circulation can also affect the local and global sea level through the changes in ocean salinity (halosteric sea level change). The retreat of land based ice (glaciers and ice sheets), on the other hand, resulting in more water discharged from land to sea, leads to an ocean mass increase and thus to a eustatic sea level rise. During the 20th century, the observed global mean sea level increased by 18 cm (e.g., Refs. [7,13]), and another 6 cm during the first 15 years of the 21st century [14]. Studies also suggest that the rates of sea level change may have accelerated in the 21st century (e.g., Refs. [10,15]). Rising sea levels could potentially pose significant threats to coastal and island communities (e.g., Refs. [7,13,16,17,18,19,20]). Moreover, multiple studies have indicated that regional sea level rise (SLR) is not uniform, and could be significantly different from the global mean and among different regions because of the internal climate processes (e.g., Refs. [13,21,22,23,24,25,26,27,28]). To successfully predict future regional SLR in order to benefit human society, it becomes necessary to better assess the SLR uncertainties associated with these internal climate processes, such as examining ocean dynamics.
Ocean dynamics are affected by exchanges of momentum, heat and freshwater between air and sea. Modulations in these exchanges due to internal climate processes or external forcing will affect both the wind-driven gyre circulation and the thermohaline-driven overturning circulation in the ocean (see Ref. [29] for details). As a result, there will be either redistribution of heat and salt in the ocean if there are no changes in external forcing, or a net gain or loss of heat and salt if there are changes in external forcing. This redistribution or net gain/loss of heat and/or of salt in the ocean will change the local seawater density and lead to subsequent changes in regional and/or global sea level through thermosteric and halosteric effects. Previous studies have used multi-model ensembles (such as simulations from the Coupled Model Intercomparison Project Phase 5 (CMIP5) models) or single-model perturbed initial-condition ensembles (such as simulations with the Community Climate System Model version 3: CCSM3) to assess the influence of internal climate processes on SLR and associated uncertainties in their prediction/projection [22,24,30]. In CCSM3, while global mean SLR is not appreciably altered by internal climate processes among different ensemble members, regional SLR can differ significantly from one ensemble member to another [24]. The degree to which this spread in regional SLR among different ensemble members depends on the details of how the ensemble members are initialized (e.g., whether just in the atmosphere as in CCSM3, or also in the ocean) remains to be investigated.
In the multi-model ensemble such as CMIP5, both regional and global mean SLR projections can be significantly different from one model to another under the same external forcing conditions [13,22,31]. This suggests that differences in model physics and possibly also in model horizontal and vertical resolutions may have affected regional and global SLR projections. These differences may also imply that the ocean state in each model and the method by which it is initialized could play a role in determining future projected SLR. Thus, understanding the impact of the details of the ensemble initialization procedure may inform the interpretation of model spread in SLR in multi-model archives such as CMIP5.
Conventionally, a large ensemble of simulations with a given coupled climate model is generated by adding small random perturbations to the atmospheric initial states, keeping initial conditions in the other model components and in the radiative forcing the same. For example, the CCSM3 40-member ensemble uses different days in a given year for the atmospheric initial conditions in each simulation, but with identical ocean, sea ice, and land initial states [32,33,34,35]. In the Community Earth System Model version 1 (CESM1) large ensemble, a round-off level perturbation is added in the atmospheric initial temperature field [36]. Since the CMIP5 multi-model ensemble shows wide spread of projected global mean SLR under the same external forcing which may have hinted at an important role for the oceanic initial state, here we assess how perturbing the oceanic initial state will affect simulated regional and global mean SLR in comparison with perturbing just the initial atmospheric state using a single model—CCSM version 4 (CCSM4). The time frame we are interested in here is decadal to multi-decadal.
The remainder of the study is structured as follows. Section 2 details the CCSM4 model and the experimental design; Section 3 contains the results and Section 4 summarizes the findings in this paper.

In this study, we investigated the influence of perturbing ocean initial conditions vs. perturbing atmospheric initial conditions on projected/predicted regional and global SLR through analyzing three sets of ensemble simulations using a coupled climate model—CCSM4. Our results show that perturbing the ocean initial conditions in general can produce larger variance on regional sea level change than perturbing the atmospheric initial conditions, on a multi-decadal timescale. The intra-ensemble variance for regional SLR in the ensemble with perturbed ocean initial conditions is much larger than the intra-ensemble variance in the ensemble with only perturbed atmospheric initial conditions. As a result, the inter-ensemble variance for regional SLR is larger in the ensemble with perturbed ocean initial conditions than in the ensemble with perturbed atmospheric initial conditions. To a lesser degree, this is also true for the global mean SLR. Therefore, our results suggest that the inter-model spread of the projected SLR in CMIP5 models for both global mean and regional SLR may at least partially be associated to the different ocean states although the different model physics and model horizontal and vertical resolutions may still play a more dominant role. This is consistent with Ref. [5] showing that individual CMIP5 models have substantially different climate sensitivity, in part due to different vertical stratifications of the ocean and thus different capacities to take up anthropogenic heat anomalies (among other parameters), furthering differences in global mean SLR.
In this study, the ensemble simulations were run for only 36 years, and the ensemble size may not be large enough to conclusively determine the importance of the perturbing ocean initial conditions on projected/predicted regional and global SLR, especially on a centennial timescale. Longer simulations and increasing the number of ensemble members are needed to address these issues in future studies. Nevertheless, our research sheds more light on the potential impact of the intrinsic variabilities of the climate system on the projected SLR regional spread and to certain extent uncertainties in SLR. For future ensemble simulations, especially a set from a single model, perturbing both ocean and atmospheric initial conditions is necessary to sample the uncertainties of the regional SLR or other climate variables due to the intrinsic climate variability in our Earth system.
Finally, we would like to mention a caveat on the model biases in simulating the observed ocean properties, specifically for CCSM4. These model biases have been documented in much detail in Refs. [66,67,68], such as the deep convection sites in the subpolar North Atlantic, the ENSO variability etc. These biases have been improved in this version of the CCSM in comparison to the previous version of the CCSM. For our study, since we are using the same model, the biases exist in all simulations. Therefore, when we compare the anomalies of the sea level changes, these biases would be removed and would not affect our results much.

A.H. conceived, designed and performed the experiments; A.H., G.M., D.S., W.H. and W.S. are all analyzed the data; and all authors actively wrote the paper. 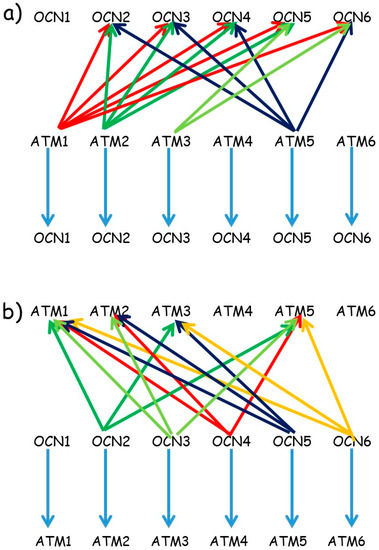 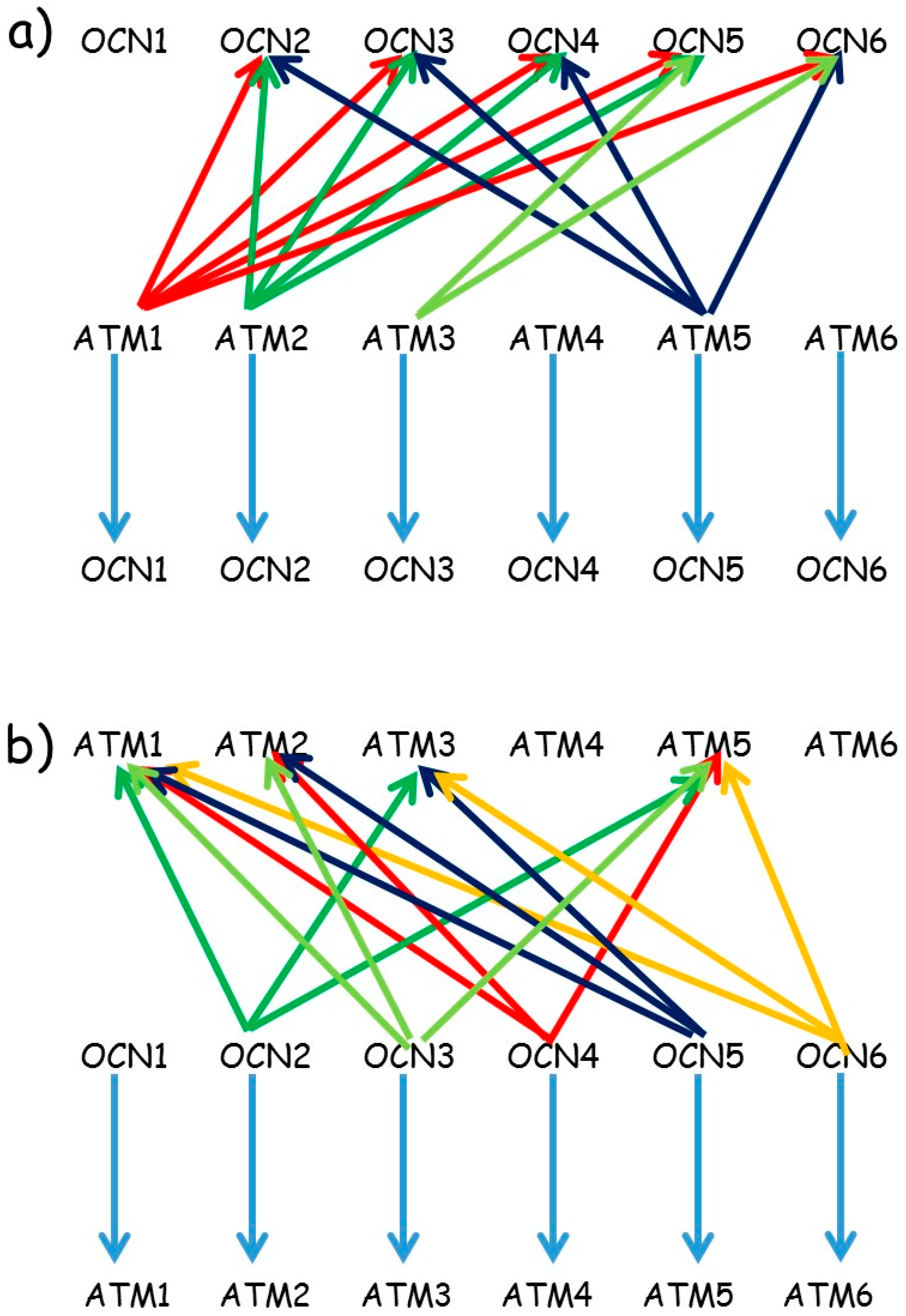 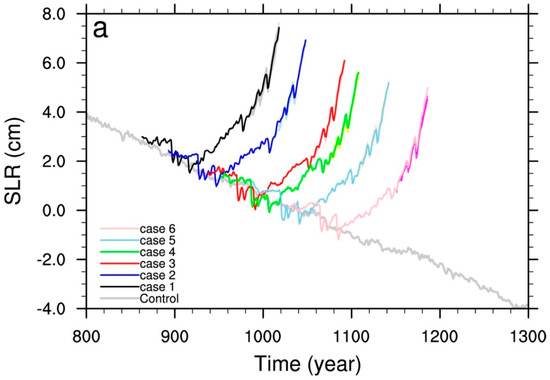 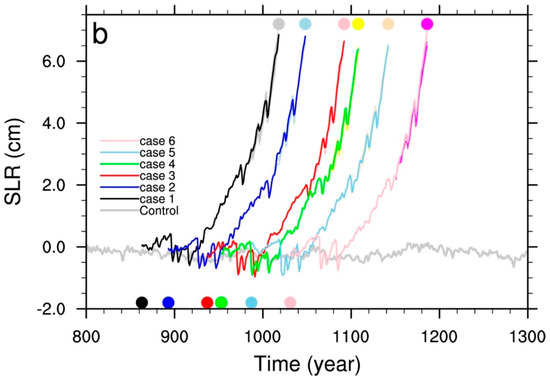 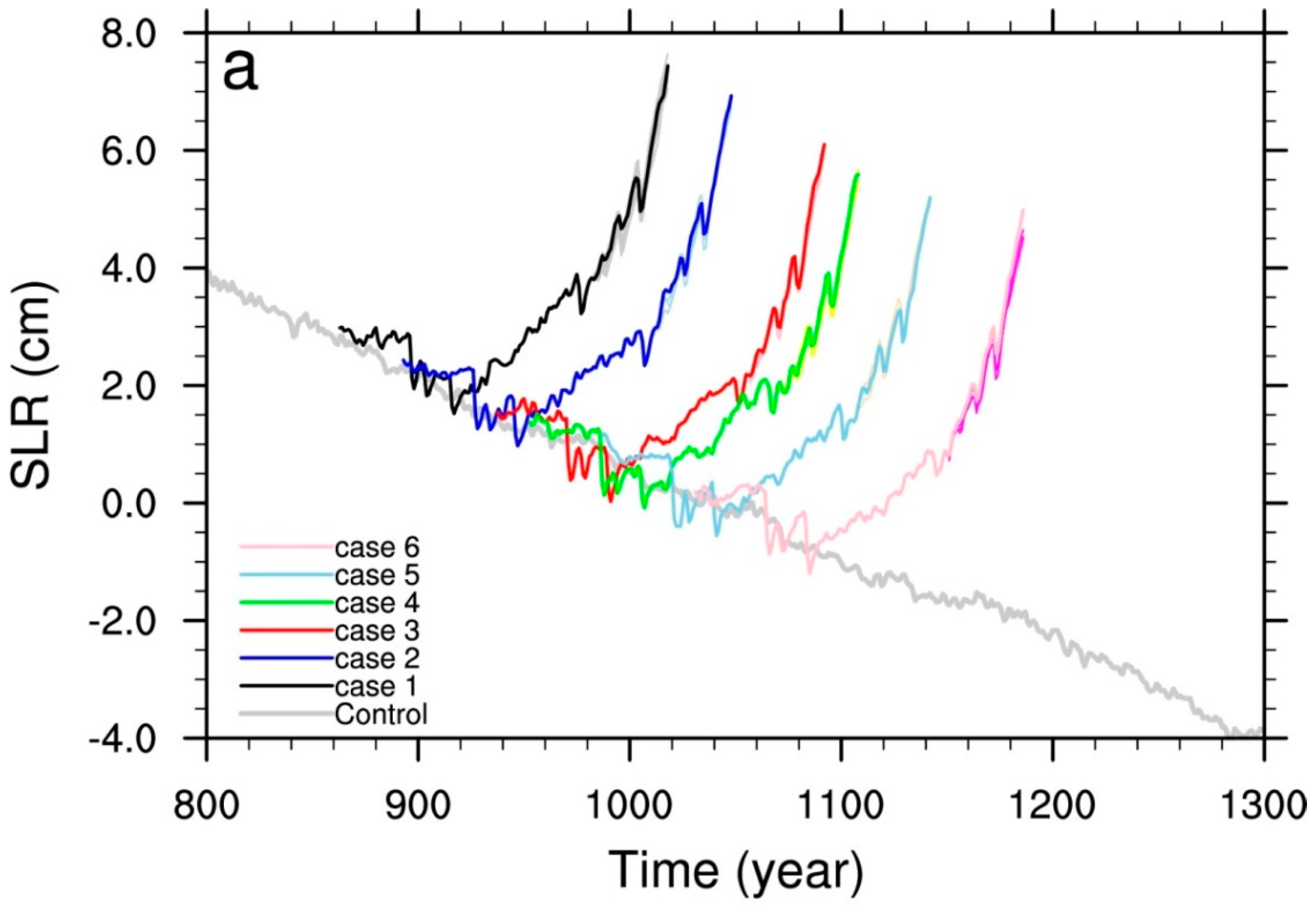 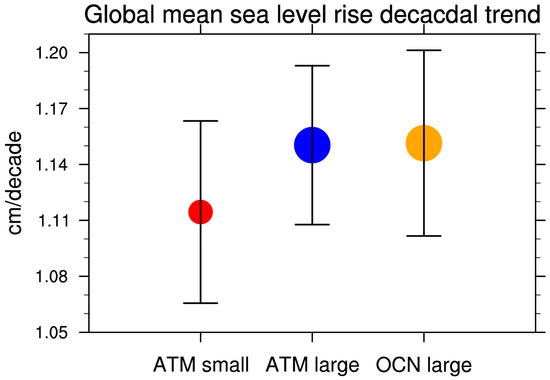 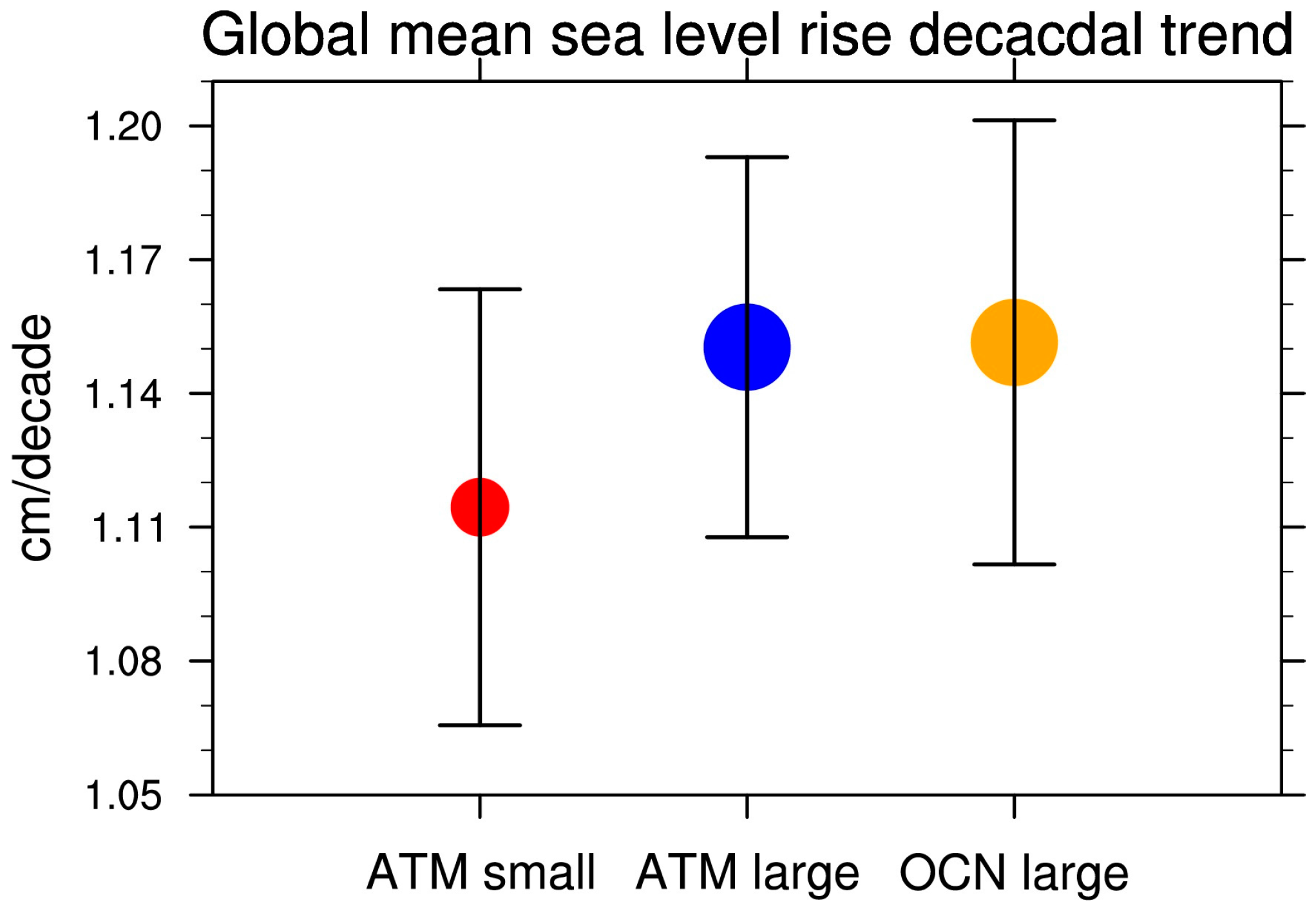 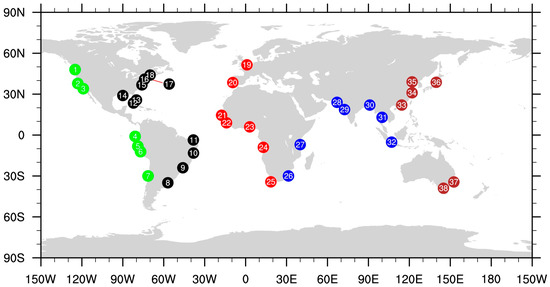 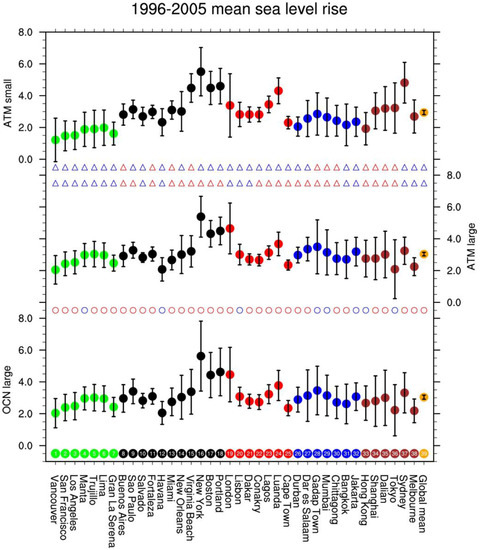 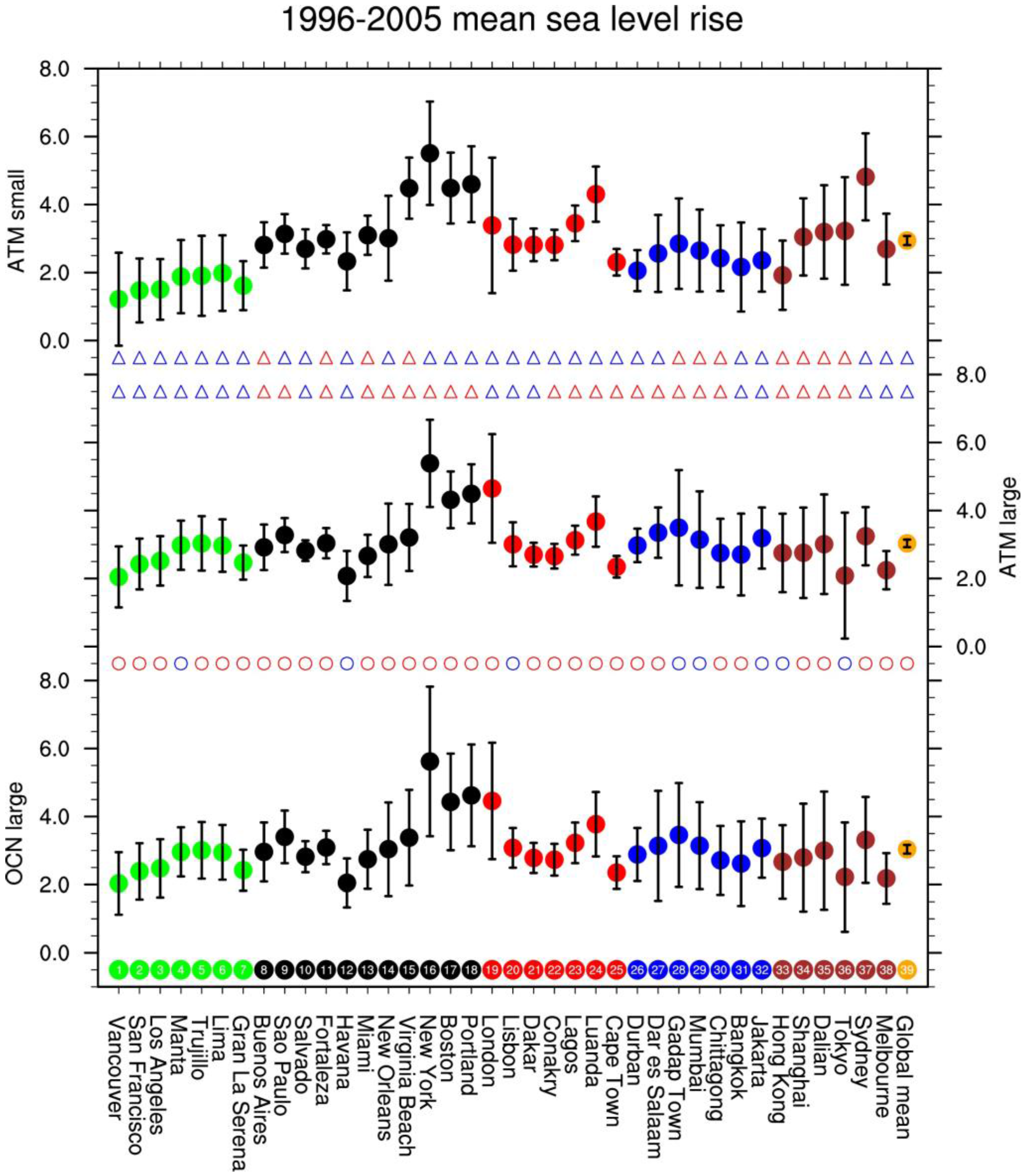 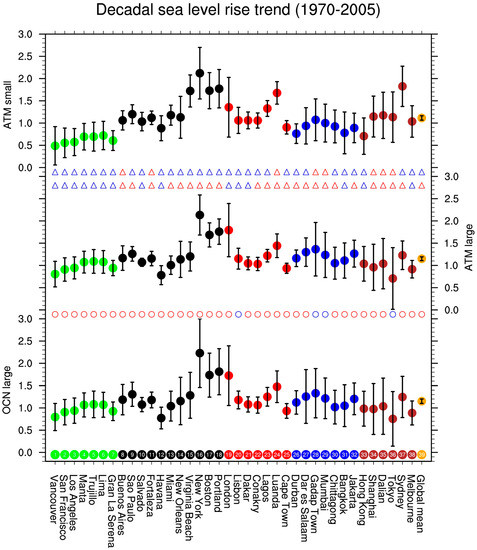 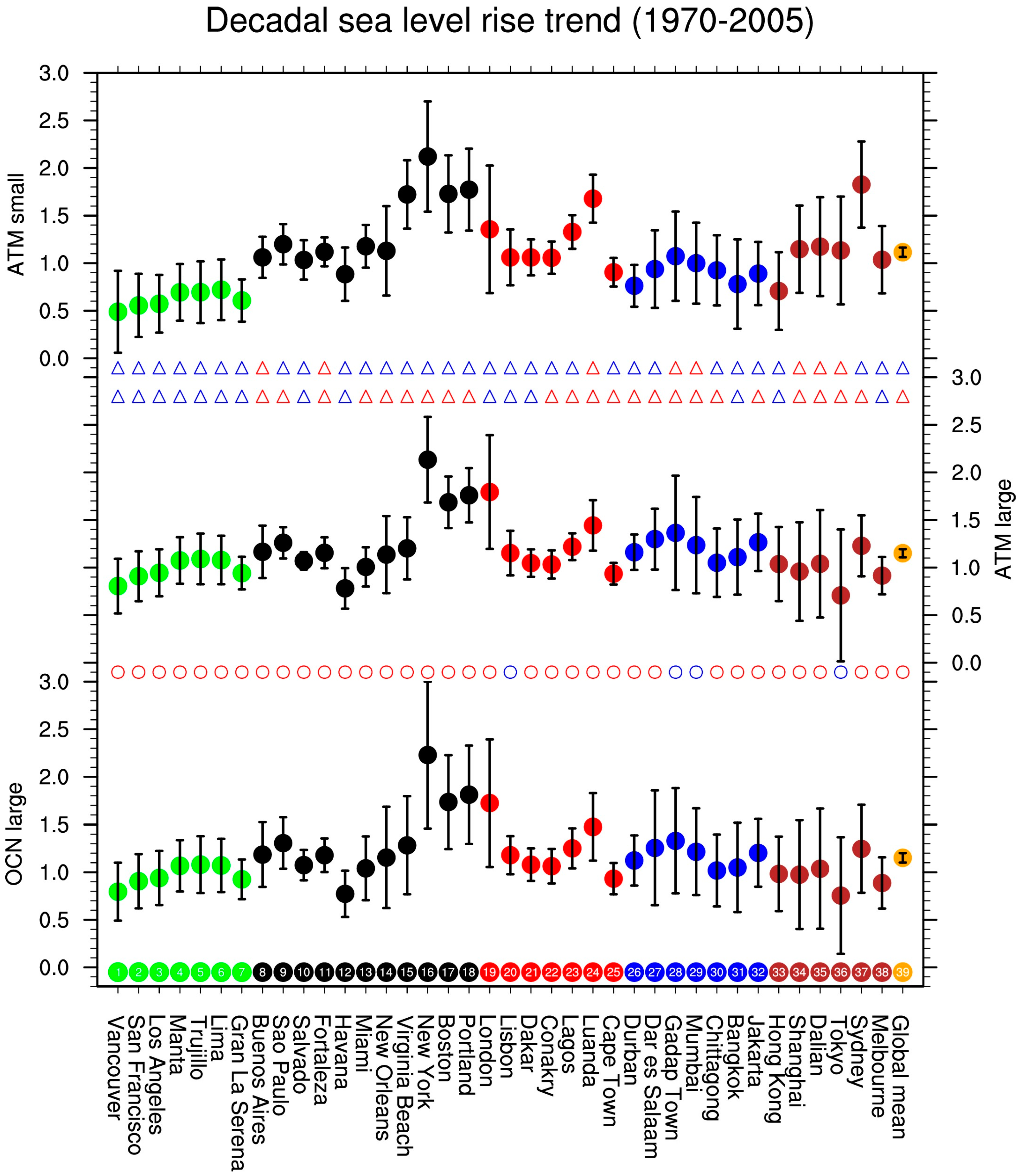 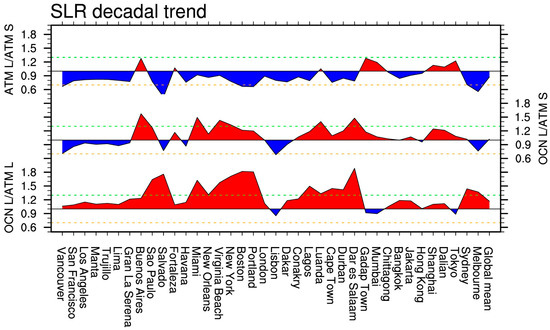 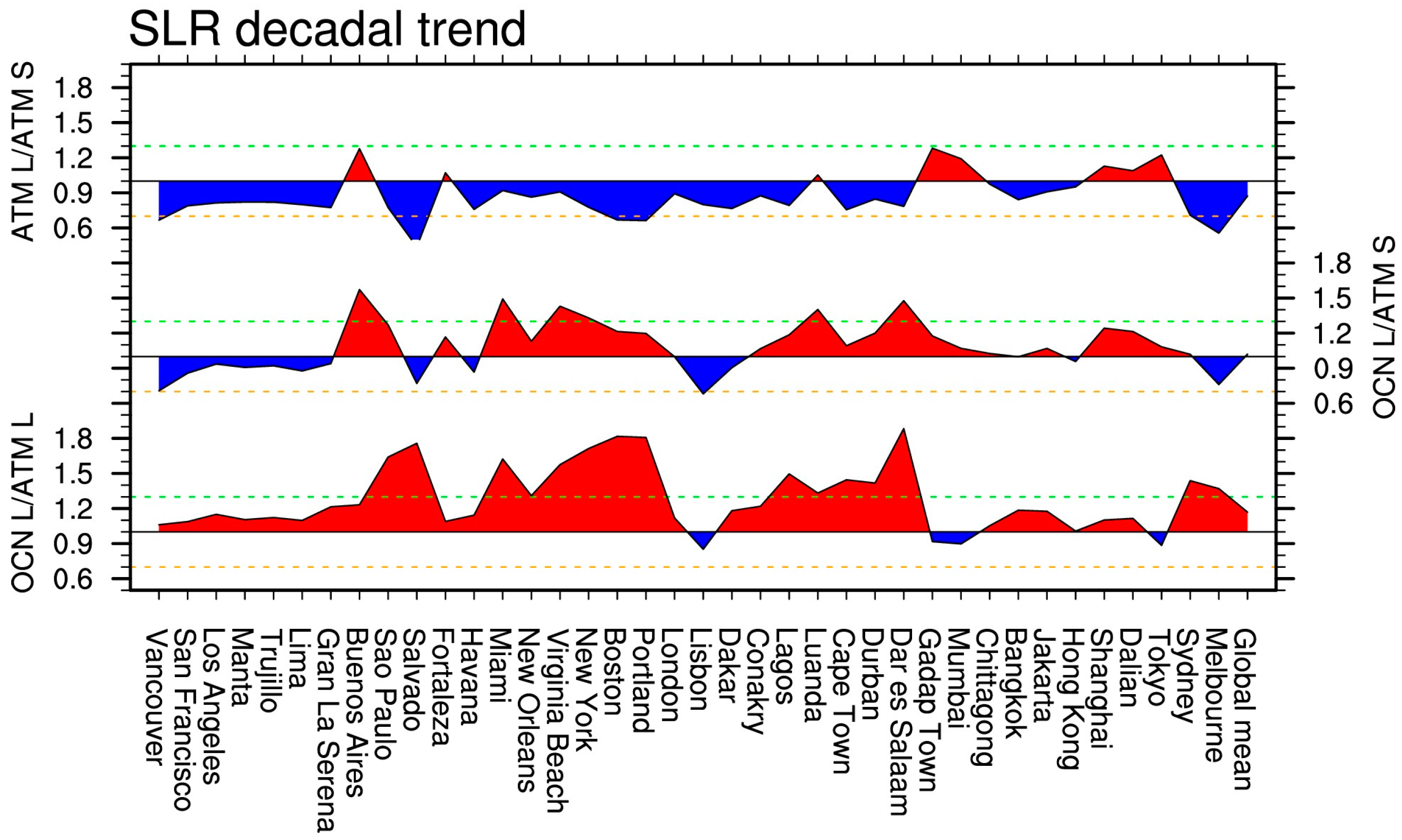 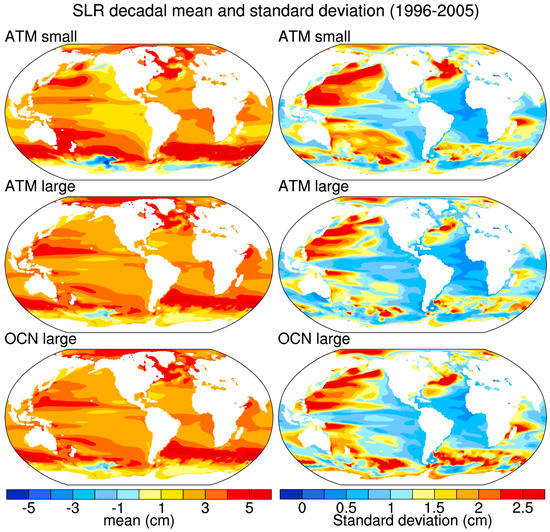 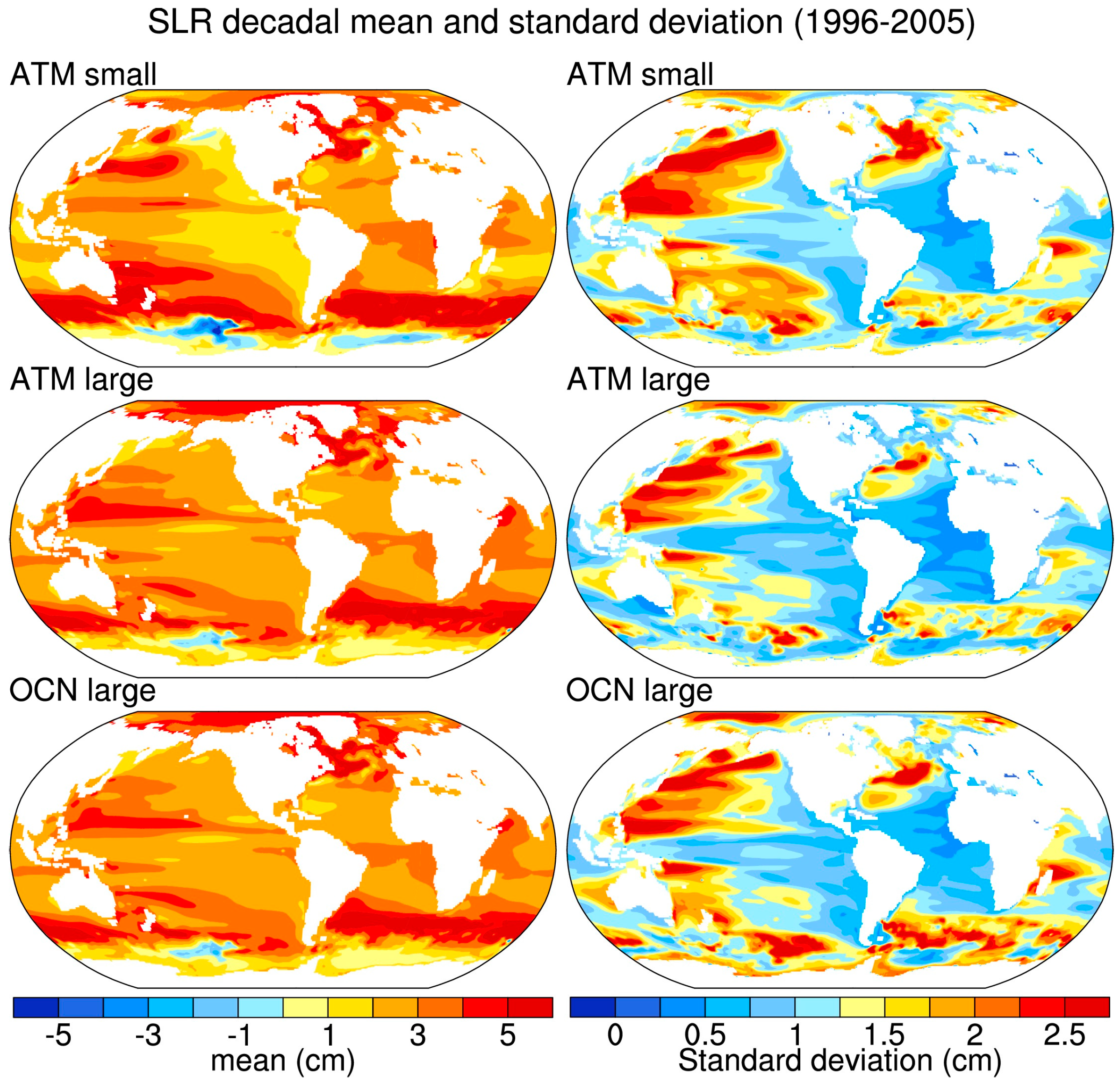 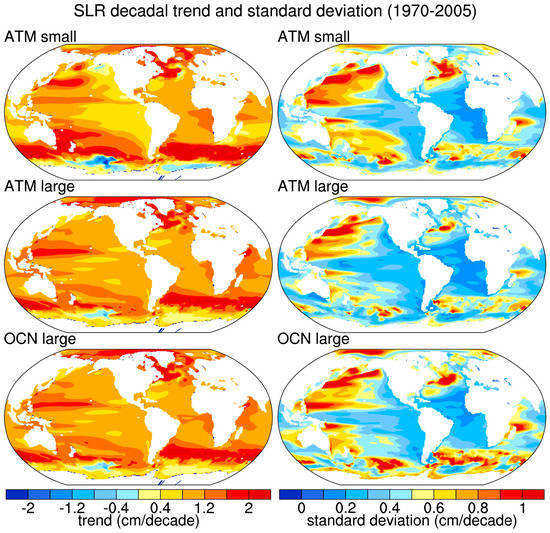 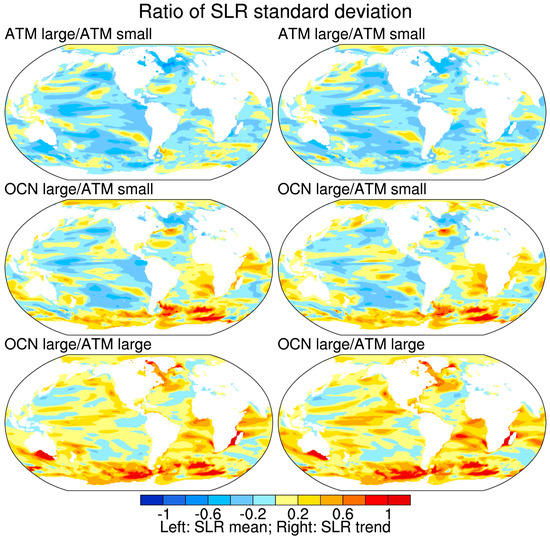 Table 1. Global mean sea level. 1
Table 1. Global mean sea level. 1
1 There are six CCSM4 historical all forcing simulations from 1850 to 2005. The year for each of the historical simulations branched from the 1850 pre-industrial control simulation is listed in the second column of the table. The global mean sea level relative to control run mean (800–1299) for each historical run at year 1850 is listed in the third column. The sea level change relative to 1850 for 1970 is listed in the fourth column. Column 5 is the number of ensemble for each of the six ocean initial states. Column 6 is the sea level change relative to 1970 at 2005. The unit for sea level rise is cm.
© 2017 by the authors. Licensee MDPI, Basel, Switzerland. This article is an open access article distributed under the terms and conditions of the Creative Commons Attribution (CC BY) license (http://creativecommons.org/licenses/by/4.0/).
We use cookies on our website to ensure you get the best experience. Read more about our cookies here.
Accept
We have just recently launched a new version of our website. Help us to further improve by taking part in this short 5 minute survey here. here.
Never show this again