Understanding the Role of Groundwater in a Remote Transboundary Lake (Hulun Lake, China)

Hulun Lake, located in a remote, semi-arid area in the northeast part of Inner Mongolia, China, shares a transboundary basin with Mongolia and supports a unique wetland ecosystem that includes many endangered species. Decadal scale decreases in the lake stage and increased salinity make an understanding of the lake’s water and salt sources critical for appropriate design of strategies to protect and manage the lake. Multiple tracers (chloride, and δ18O and δ2H in water) in samples collected from lake water, rivers, and nearby water wells were used in conjunction with an annual water balance based on historic data to better understand the lake’s major water and salt sources. The average annual water balance was conducted for two time periods: 1981–2000 and 2001–2013. The contribution of river discharge to the annual lake input decreased by half (from 64% to 31%) between the two time periods, while the volumetric contribution of groundwater discharge increased four-fold (from about 11% to about 50% of the total lake input). Significant evaporation was apparent in the stable isotope composition of the present-day lake water, however, evaporation alone could not account for the high lake water chloride concentrations. Limited domestic well water sampling, a regional salinity survey, and saline soils suggest that high chloride groundwater concentrations exist in the region south of the lake. The chloride mass balance suggested that groundwater currently contributes more than 90% of the annual chloride loading to the lake, which is likely four times greater than the earlier period (1981–2000) with lower groundwater input. The use of water and chloride mass balances combined with water isotope analyses could be applied to other watersheds where hydrologic information is scarce. View Full-Text
Keywords: groundwater; evaporative loss; stable isotope; chloride; salt; mass balance; Hulun Lake groundwater; evaporative loss; stable isotope; chloride; salt; mass balance; Hulun Lake
►▼ Show Figures 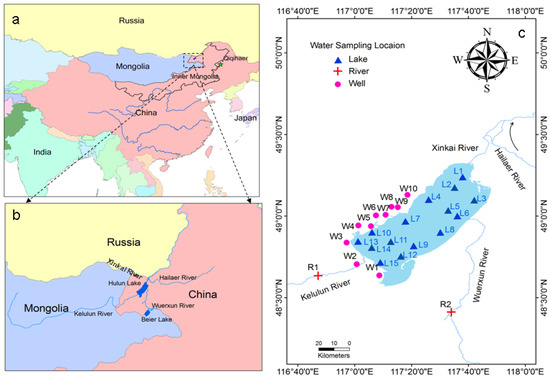