Scoping for the Operation of Agile Urban Adaptation for Secondary Cities of the Global South: Possibilities in Pune, India

Cities have already connected adaptation goals with development needs at a strategic level (e.g., Surat, Semarang [52]) but are striving hard to strike a balance between development (Type I) and adaptation (Type II) [53]. From the application of the agile urban adaptation process in Pune it is evident that Type I and Type II needs can be integrated at planning and implementation levels. SWOT analysis, mapping of relationships, synergies and the agility score card for responses reveal that agile urban adaptation can be implemented using conventional adaptation responses.
Conventional responses and unconventional process: The scoping exercise in Pune has revealed that conventional adaptation responses such as rain water harvesting, open area development and check dams have agile characteristics. Qualitative analysis of agile elements reveal that the nature of agile characteristics varies across adaptation responses. For example, the check dam has a high score with respect to stakeholder participation but a low score for flexibility. The embankments have high flexibility but very low leapfrogging potential. Overall, there is a high score for stakeholder involvement and there is an equal spread in the scores for other agile elements. This understanding can help in redesigning the responses so that the agility scores can be increased or help in creating additional responses that can make the overall adaptation process more agile. Being flexible and continuously engaging with stakeholders throughout the process also increases the accessibility and responsiveness among stakeholders. This can lead to the evolution of clumsy responses, i.e., adaptation responses which emerge from the local adaptation setting with outcomes that are beneficial and acceptable to all the stakeholders [12].
Simplicity of operational process: From the scoping exercise in Pune, it can be seen that a SWOT analysis and stakeholder mapping of the responses enabled the identification of the relationships and synergies between measures. Although the agility scores are qualitative, there is scope for developing a quantitative scoring method, similar to multiple benefits assessment tools (e.g., BeST [54]). Further identification of the leapfrogging potential is simple and can be guided using the principles of localising the SDGs [8].
Legitimising agile urban adaptation: Lack of motivation and ability among the stakeholders is considered as one the reasons for non-implementation of adaptation responses [21]. SDG initiatives offer motivation and a conducive environment for using agile urban adaptation, which can fast-track the achievement of SDGs. Agility offers the ability to stakeholders to implement adaptation responses in a quick and flexible manner [13]. Although agile adaptation is unlikely to create setbacks, changing frequently and too quickly could be seen as acting without clarity and lack of confidence by some of the stakeholders [55]. This might lead to the lack of political legitimacy and loss of mandate of the political and administrative authority. Policy backing for the agile adaptation process for the purpose of achieving SDGs will enhance its credibility. Agile urban adaptation will be more effective and assertive if it can secure political and institutional legitimacy. A comprehensive insight of resource allocation and timelines for planning, implementation, operation and maintenance of adaptation responses can be obtained through the analysis of the current, historical annual municipal budgets and annual audited statements. Assessing the responses from the aforementioned reports using the agility scorecard will help planning in advance for the next budget cycle, or in case there are special funds or grants which are lapsable.
Although it is theoretically possible to adapt short time steps such as in cycles of few weeks like in software development in an agile manner, we need to consider at least six months to one year lead time for approval and listing in the municipal budget. There are administrative and procedural hurdles in implementing response when they are not mentioned in the municipal budget for the planning year or approved by the municipal council. However, some of the adaptation responses can be implemented through approved actions such as operation and maintenance (O&M) of municipal assets. O&M is a broad budget head with no specific mention about locations or nature of interventions. The approved annual city budgets usually have considerable resources allocated for O&M, including retrofitting and replacement of assets, which can be utilised for agile implementation.
The scoping exercise in Pune reveals that working towards legitimacy might face little or no hindrance as agility can be practised using conventional adaptation responses within the existing urban institutional framework, i.e., the agility scores of agile elements of responses can be increased within the existing urban institutional framework. The legitimacy aspects can be further explored.
Relevance to sponge cities: The adaptation context and adaptation responses in Pune are comparable to that of sponge cities as sponge cites also aim at satisfying the adaptation deficits and adaptation needs, whereas the aspect of harmonising the deficits and need are not obvious. However, harmonising the adaptation deficits and needs is a necessity in sponge cities. Hence, it can be argued that the agile urban adaptation process is also valid and applied in the context of sponge cities. Also in case of sponge cities, planning and implementation of adaptation responses is left to cities although the overall guidance is from three central ministries [9]. The responsibility and ownership at city level for the planning and implementation of responses are ideal for the application of agile adaptation process, localisation and attainment of SDGs and the evolution of clumsy responses in sponge cities. City of Rotterdam in the Netherlands has some good examples in this regard, where there is a good coordination between various departments. For example the water department of Rotterdam proactively engages with other infrastructure departments whenever a major infrastructure change happens and tries to embed a water component as part of the change [56].

The authors would like to thank Pune Municipal Corporation, Non-governmental agencies, various agencies of the State Government of Maharashtra and Government of India for sharing the data and for the consultations.

The paper is based on the results obtained from the research of Tejas M. Pathak, which was done for the partial fulfilment of requirements for the Master of Science degree at the IHE Delft Institute for Water Education under the supervision of Assela Pathirana, Mohanasundar Radhakrishnan and Keneth Irvine. The first draft was written by Mohanasundar Radhakrishnan and Tejas M. Pathak. Assela Pathriana and Keneth Irvine helped to review and improve the paper. 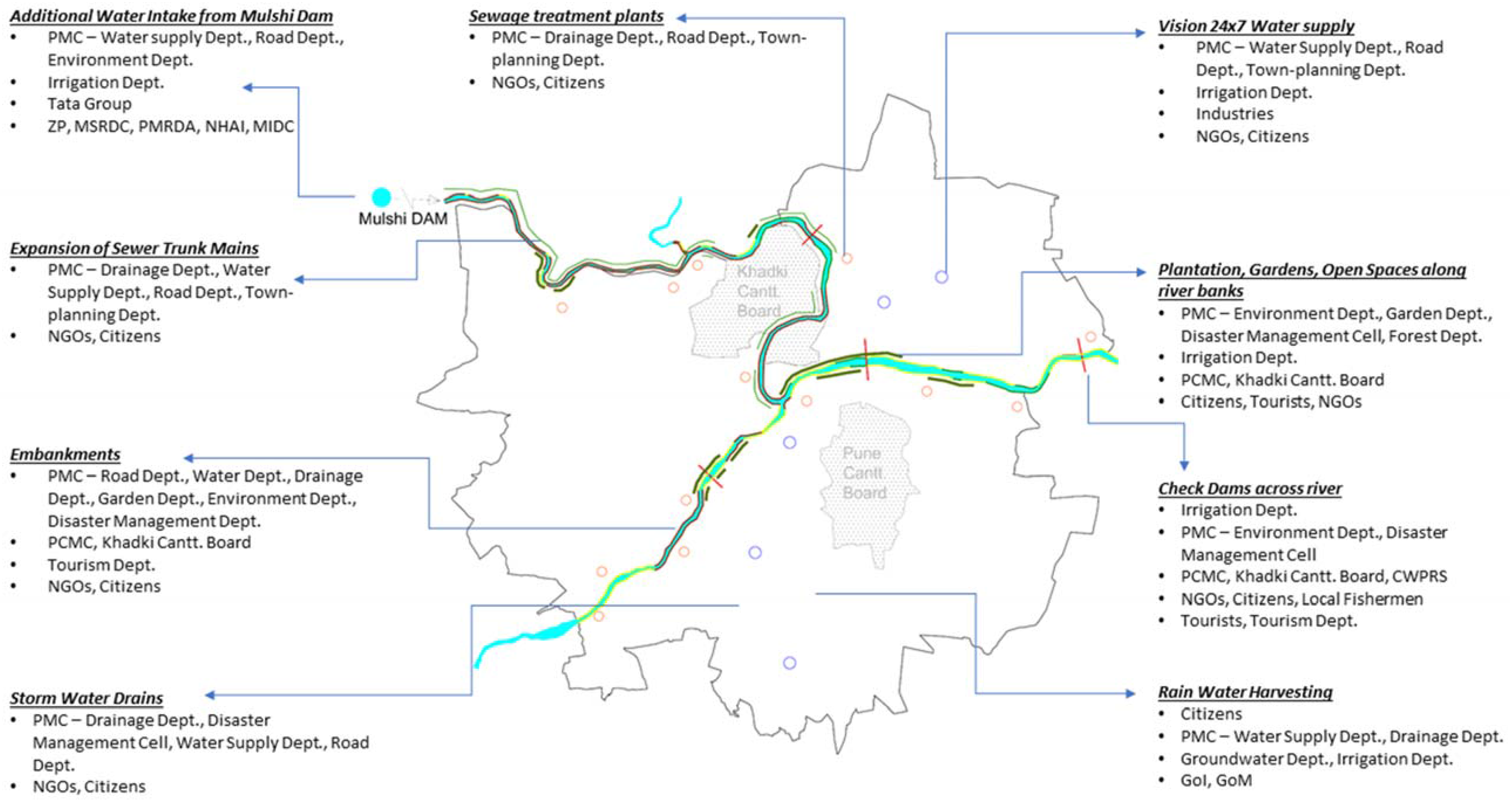 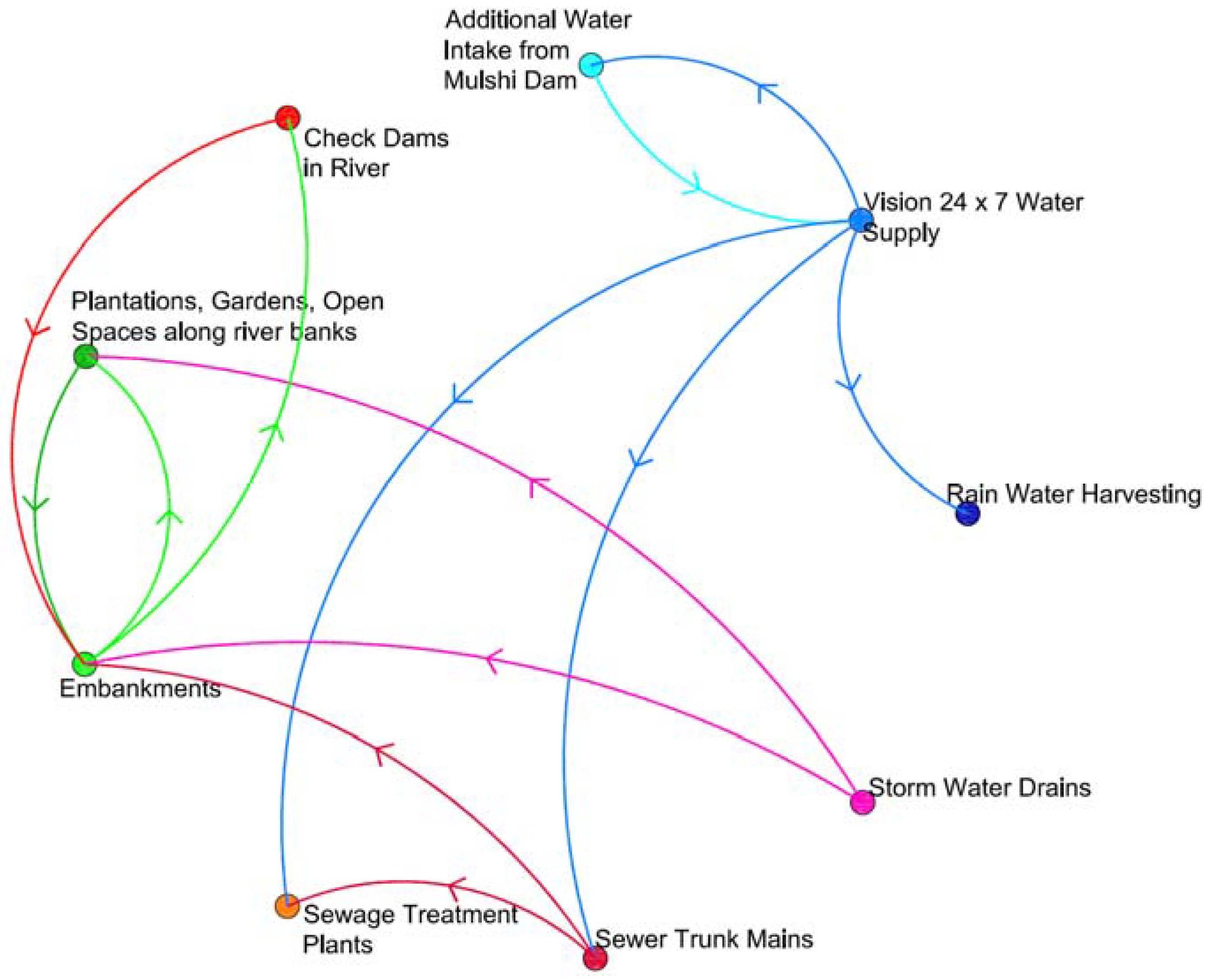 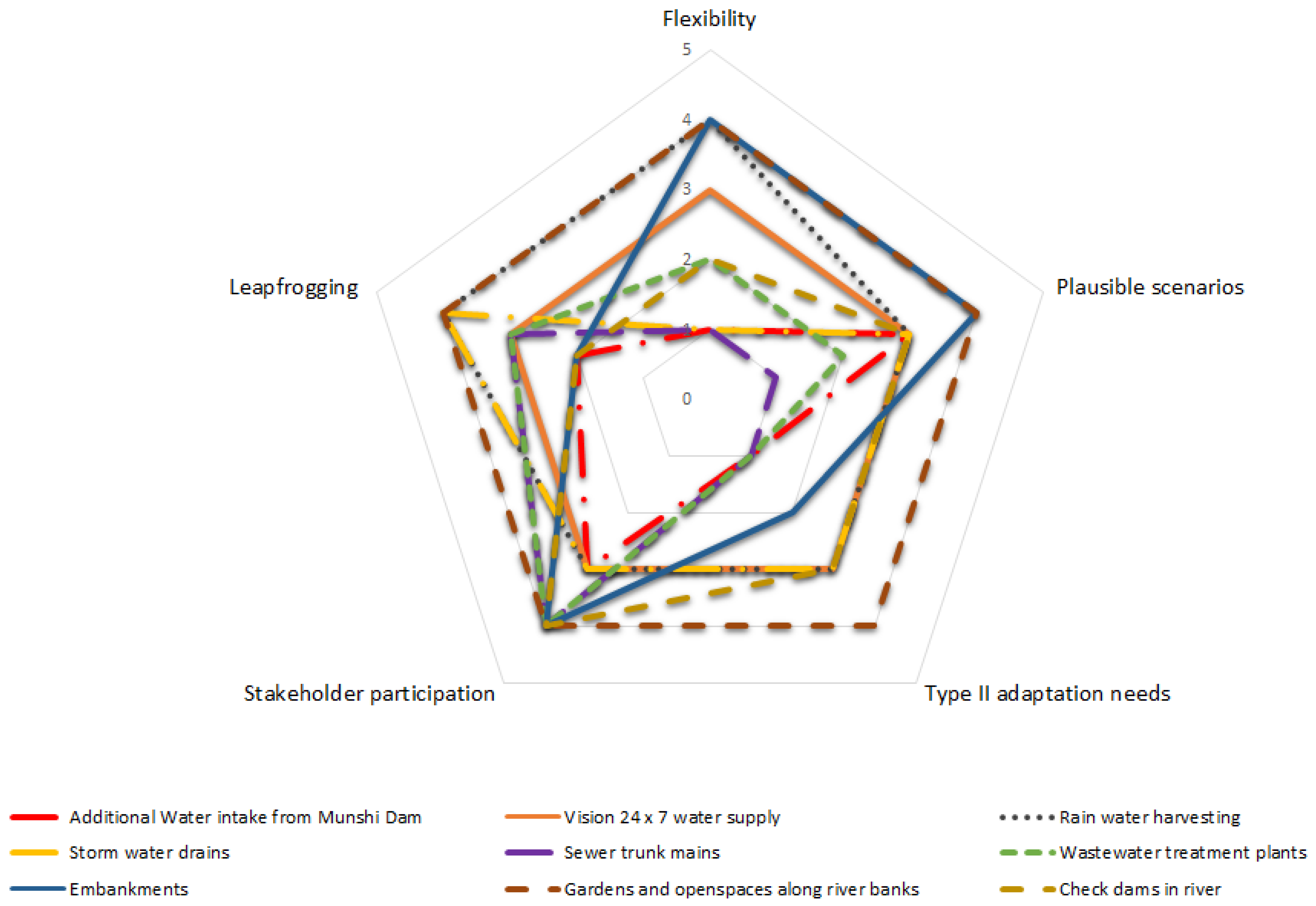