200 kHz Sonication of Mixed-Algae Suspension from a Eutrophic Lake: The Effect on the Caution vs. Outbreak Bloom Alert Levels
Next Article in Special Issue

The Source, Flow Rates, and Hydrochemical Evolution of Groundwater in an Alluvial Fan of Qilian Mountain, Northwest China

Major ions and selected environmental tracers (D, 18O, 3H and chlorofluorocarbons (CFCs)) were employed to determine the source, flow rates, and hydrochemical evolution of groundwater in an alluvial fan along the front of the Qilian Mountains, which serves as an important groundwater reservoir in northwest China. Temporal and spatial variations in ion concentrations were limited near the upper portion of the alluvial fan. However, groundwater quality deteriorated along the flow path as concentrations of Mg2+, Na+, SO42−, and Cl− increased toward the fan toe and into the center of the valley. The relative abundance of the major cations and anions also changed down-fan from Ca2+ to Na+ and Mg2+, and from HCO3− to SO42− and Cl−, respectively. Isotopic data suggests that precipitation within the Qilian Mountains, which recharged the alluvial deposits near the mountain front, was the primary source of groundwater. Apparent groundwater ages determined by CFCs varied from 23 to 40 years, and in general, increased in age from south to north (down-fan). It is concluded that groundwater in the study area was recharged by the Qilian Mountains, flowed through the alluvial fan from south to north, and was subsequently discharged several decades later from springs located along the toe of the fan, after which it re-entered the Shule River. View Full-Text
Keywords: alluvial fan; geochemical groundwater evolution; isotopic tracers; groundwater age dating; Qilian mountains alluvial fan; geochemical groundwater evolution; isotopic tracers; groundwater age dating; Qilian mountains
►▼ Show Figures 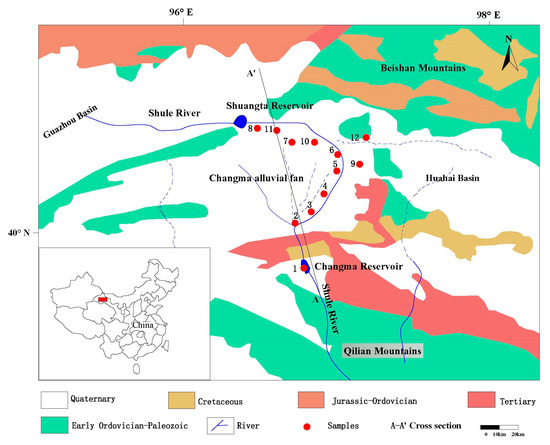