Re-Linking Governance of Energy with Livelihoods and Irrigation in Uttarakhand, India
Previous Article in Journal

Restoration of Shallow Lakes in Subtropical and Tropical China: Response of Nutrients and Water Clarity to Biomanipulation by Fish Removal and Submerged Plant Transplantation

The wastewater generated by isolated houses without access to public sewers can cause environmental problems, like the contamination of aquifers with nitrates and phosphates, as occurs in southeastern Spain. The effectiveness of a previously built horizontal subsurface ﬂow constructed wetland (HF-CW) was studied over two years as a possible solution. This HF-CW measured 27 m2; it was planted with Phragmites australis(Cav.) Trin. Ex Steuds sp. Altissima and the parameters studied were those required by European Union (EU) legislation and adopted by Spain. Average abatement efﬁciency rates, for the ﬁrst and the second year of study, were: biochemical oxygen demand over ﬁve days (BOD5) (96.4%, 92.0%), chemical oxygen demand (COD) (84.6%, 77.7%), total suspended solids(TSS) (94.8%,89.9%),total nitrogen(TN)(79.5%,66.0%),ammonium nitrogen(NH4+-N)(98.8%, 86.6%) and total phosphorous (TP) (83.7%, 82.8%). Average abatement efﬁciency for nitrate nitrogen (NO3−-N) (−1280.5%, −961.1%) and nitrite nitrogen (NO2−-N) (−5.8%, −40.0%) were negative because its content in inﬂuent wastewater was very low and they appear mainly from inﬂuent NH4+-N, as a result of puriﬁcation processes carried out in the HF-CW bed. The abatement rates make the system suitable to produce discharges into the environment in accordance with Spanish law. It is noteworthy that the HF-CW patch suffered an episode of bed drying during the summer of 2013, whereby the causes were related to system oversizing and high evapotranspiration in the area. As a consequence, the decrease in the abatement of water pollutants during the second year can be attributed to the creation of preferential water ﬂow paths and short circuits through the constructed wetland (CW) bed. As a result of the oversizing of the CW, a theoretical resizing based on BOD5, TSS, TN or TP is proposed. The calculated values for the redesign were: 5.22 m2 considering DBO5, 0.18 m2 considering TSS, 10.14 m2 considering TN and 23.83 m2 considering TP. Considering the area where the HF-CW was located and in accordance with Spanish law for non-sensitive areas (no TN or TP requirements for wastewater discharge), BOD5 is the most appropriate parameter for design; it is 5.2 times lower than the HF-CW initially built and without risk of bed drying. View Full-Text
Keywords: sewage phytodepuration; Mediterranean climate; Phragmites australis; legal requirements; optimal design; abatement efﬁciency rates sewage phytodepuration; Mediterranean climate; Phragmites australis; legal requirements; optimal design; abatement efﬁciency rates
►▼ Show Figures 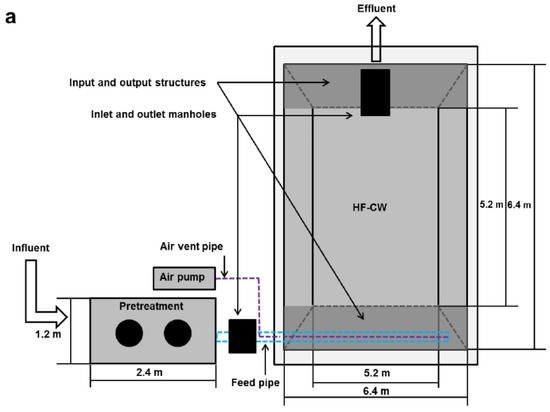