Effect of Ultrasound Pretreatment on Sludge Digestion and Dewatering Characteristics: Application of Particle Size Analysis
Next Article in Special Issue

Obtaining the Thermal Structure of Lakes from the Air

The significance of thermal heterogeneities in small surface water bodies as drivers of mixing and for habitat provision is increasingly recognized, yet obtaining three-dimensionally-resolved observations of the thermal structure of lakes and rivers remains challenging. Remote observations of water temperature from aerial platforms are attractive: such platforms do not require shoreline access; they can be quickly and easily deployed and redeployed to facilitate repeated sampling and can rapidly move between target locations, allowing multiple measurements to be made during a single flight. However, they are also subject to well-known limitations, including payload, operability and a tradeoff between the extent and density over which measurements can be made within restricted flight times. This paper introduces a novel aerial thermal sensing platform that lowers a temperature sensor into the water to record temperature measurements throughout a shallow water column and presents results from initial field experiments comparing \emph{in situ} temperature observations to those made from the UAS platform. These experiments show that with minor improvements, UASs have the potential to enable high-resolution 3D thermal mapping of a \(\sim\)1-ha lake in 2–3 flights (\textit{circa} 2 h), sufficient to resolve diurnal variations. This paper identifies operational constraints and key areas for further development, including the need for the integration of a faster temperature sensor with the aerial vehicle and better control of the sensor depth, especially when near the water surface. View Full-Text
Keywords: unmanned aerial systems (UAS); unmanned aerial vehicle (UAV); robotics; thermal structure; aquatic ecosystems unmanned aerial systems (UAS); unmanned aerial vehicle (UAV); robotics; thermal structure; aquatic ecosystems
►▼ Show Figures 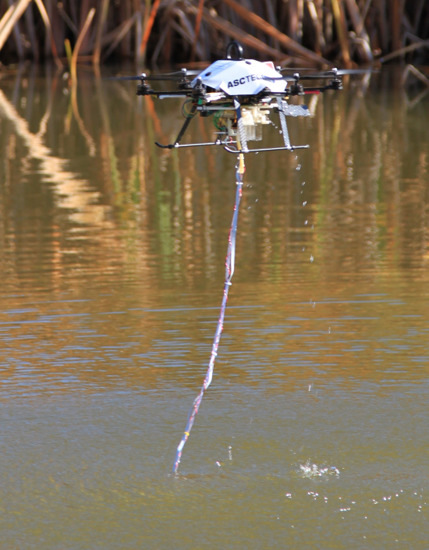